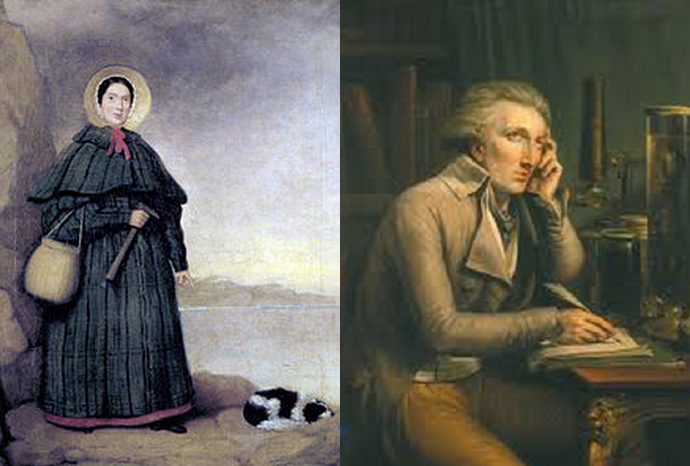 Mary Anning was born on Lyme Regis on May 21, 1799.  She has been called “the Princess of Palaeontology”  by the German explorer Ludwig Leichhardt and scientists like William Buckland or Henry de la Beche owe their achievements to Mary’s work.

George Cuvier, the famous French paleontologist also benefited with Mary Anning’s discoveries. He acquired several ichthyosaur specimens and a plesiosaur specimen  found by her. The study of these fossils allowed him to apply his comparative anatomical method and to support his catastrophist theory.

When George Cuvier went to England in 1818, he took the opportunity to examine at the remains of a marine reptile  that had been previously described by Sir Everard Home. The specimen, an ichthyosaur, was unearthed by Joseph and Mary Anning in 1811. Cuvier rapidly managed to get casts and ﬁne specimens of all marine reptiles discovered in England, especially those made in Lyme Regis by the Anning family. 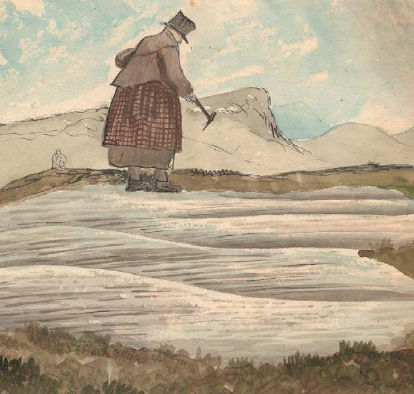 In December 1823, Mary made another amazing discovery. She found the first complete Plesiosaurus skeleton. She immediately wrote to William Buckland,  the famous English geologist and paleontologist, describing the strange specimen.

The unexpected proportions of the neck, raised the suspicions of Cuvier, who wrote to William Conybeare suggesting that the find was a fake produced by combining fossil bones from different animals. William Buckland and Conybeare sent a letter to Cuvier including anatomical details, an engraving of the specimen and a sketch made by Mary Morland (Buckland’s wife) based on Mary Anning’s own drawings and they convinced Cuvier that this specimen was a genuine ﬁnd. From that moment, Cuvier treated Mary Anning as a legitimate and respectable fossil collector and cited her name in his publications.

In May 1824, Cuvier sent geologist Constant Prévost to England for an ofﬁcial geological trip, supported by the administration of the Palaeontology Gallery of the Muséum National d’Histoire Naturelle. In June 1824 Prévost – accompanied by Charles Lyell-   went to Lyme Regis and met Mary Anning. He bought a plesiosaur for £10 and sent it to Paris. Cuvier included the  engraving of his plesiosaur in a third edition of his “Discours sur les révolutions de la surface du globe”.