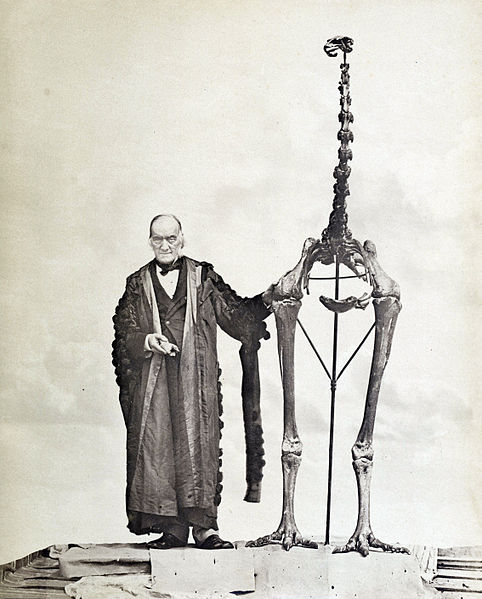 Over the past 50 years, the pace and magnitude of human-induced global changes has accelerated dramatically. The term defaunation was created to designate the declining of top predators and herbivores triggered by human activity, that results in a lack of agents that control the components of the ecosystems vegetation. Although anthropogenic climate change is playing a growing role, the primary drivers of modern extinctions seem to be habitat loss, human predation, and introduced species. The same drivers that contributed to ancient megafaunal and island extinctions.

The emerging discipline of conservation paleobiology is supplying necessary information to understand how ecosystems vary naturally through time and space and how they respond to major perturbations. The fossils that have provided such data include phytoplankton, zooplankton, fossil pollen, seeds, leaves, wood, invertebrate animals with hard parts, and vertebrate animals. They are particularly useful because they often show high fidelity to the living communities. Quaternary fossils have proven especially informative for addressing conservation questions, but useful information has also come from much older fossil deposits, reaching back millions of years. 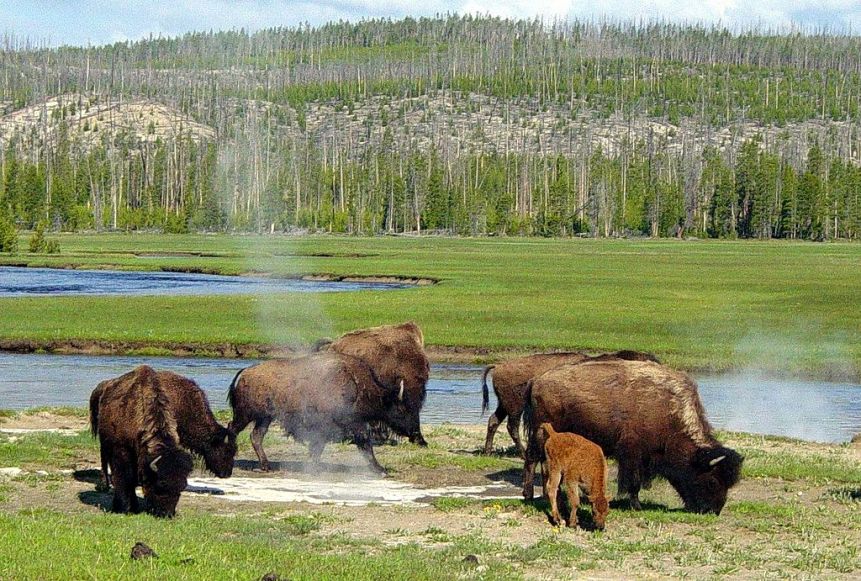 Bison near a hot spring in Yellowstone National Park (From Wikimedia Commons).

The analytical methods that allow comparing present with past fall into two main categories: taxon-based and taxon-free. Taxon-based methods rely on the presence, absence, or abundances of certain taxa and their underlying diversity. Taxon-free methods use metrics that reflect ecosystem function rather than structure. Depending on the availability of fossils and the type of conservation question being asked, one or the other approach may be more appropriate.

Taxon-based paleontological data are critical in deciding if a “natural” landscape represents a historical or a novel ecosystem. Historical ecosystems are those that still have at least 70% of the habitats that were present 500 years ago and that contain fewer than 5 people/km2. In the world’s first national park, Yellowstone National Park, USA, paleontological data influenced critical management decisions by demonstrating that Yellowstone preserves a historical ecosystem. Fossil deposits verified that almost all of the mammal species that had occupied the region for millennia are still present. Also, palynological records show that the current vegetation has persisted with only minor fluctuations in abundance of dominant taxa for at least 8000 years. 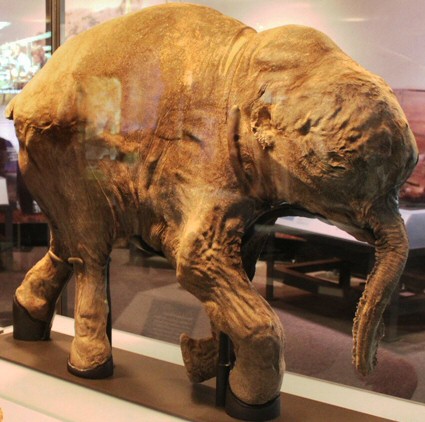 Lyuba, the best preserved mammoth mummy in the world, at the Field Museum of Natural History (From Wikimedia Commons).

Taxon-free paleontological can often be related to environmental parameters with statistical significance data, and are critical for understanding whether certain ecosystems are approaching “tipping points,” as demonstrated by analysis of diatoms, pollen, and sediments from lake cores.

Fossils have also figured prominently  with efforts to reconstruct copies of species that humans have driven to extinction either recently (passenger pigeons) or in the deeper past (mammoths). Unfortunately, the ecosystems that supported many extinct species no longer exist, so survival outside of captivity would be difficult. In addition, preventing the extinction of extant species and habitats numbering in the thousands already is challenging, so the prospects of sustaining “de-extincted” species are poor at best. Media reports are presenting de-extinction in an optimistic framework, and conveying the impression that we face a real possibility of bringing mammoth back from extinction in  the near future. Of course, this is far from truth. We will never be able to recreate most extinct species in their purest form. Ultimately,  genetic engineering to simulate extinct life also raises ethical and legal concerns.

Isaberrysaura mollensis gen. et sp. nov. is the first dinosaur recovered in the marine-deltaic deposits of the Los Molles Formation (Neuquén Province, Argentina), and the first neornithischian dinosaur known from the Jurassic of South America. So far, the South American record of Jurassic ornithischian dinosaurs was limited to a few specimens belonging to Heterodontosauriformes, a clade of small-sized forms that survived in Europe up to the Early Cretaceous. The name Isaberrysaura is derived from “Isa Berry” (Isabel Valdivia Berry, who reported the initial finding) and the Greek word “saura” (lizard).

The holotype of Isaberrysaura is an incomplete articulated skeleton with an almost complete skull, and a partial postcranium consisting of 6 cervical vertebrae, 15 dorsal vertebrae, a sacrum with a partial ilium and an apparently complete pubis, 9 caudal vertebrae, part of a scapula, ribs, and unidentifiable fragments. One of the most notable features of the discovery is the presence of permineralized seeds in the middle-posterior part of the thoracic cavity. The seeds were assigned to the Cycadales (Zamiineae) on the basis of a well-defined coronula in the micropylar region. The findings suggest the hypothesis of interactions (endozoochory) between cycads and dinosaurs, especially in the dispersion of seeds.

The cranium of Isaberrysaura is reminiscent of that of the thyreophorans. The skull is estimated to be 52 cm long and 20 cm wide across the orbits. The jugal is triradiate and the nasals are ~20 cm long. There are two supraorbital bones; one is elongated (~10 cm), as in stegosaurs, and the other element interpreted as a posterior supraorbital is located on the posterior margin of the orbit. It has at least six premaxillary teeth, and there is no diastema between the premaxillary and the maxillary tooth row. Despite the many similarities between Isaberrysaura and the thyreophorans, the phylogenetic analysis indicates that Isaberrysaura is a basal ornithopod, suggesting that both Thyreophora and neornithischians could have achieved significant convergent features. 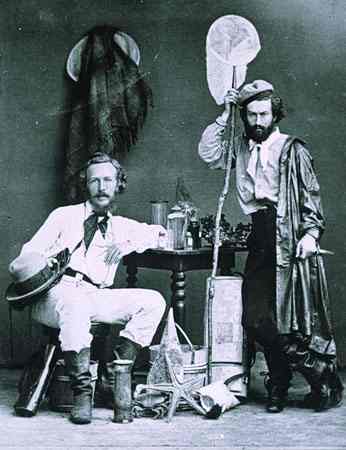 Ernst Haeckel and his assistant Nicholas Miklouho-Maclay, photographed in the Canary Islands in 1866. From Wikimedia Commons.

Ernst Heinrich Philipp August Haeckel  was born on February 16, 1834, in Potsdam, Prussia. He wanted to be a botanist and his hero was Alexander Humboldt, but his father, a lawyer and government official, thought the career prospects in botany were poor. Following his father’s advice, he studied medicine at the University of Berlin and graduated in 1857.

The explorations of Humboldt and Darwin permanently impressed him, and in 1859, E. Haeckel travelled to Italy and  spent some time in Napoli, exploring and discovering his talent as an artist. Then he went to Messina, where began to study radiolarians. In 1864, he sent to Darwin, two folio volumes on radiolarians. Goethe was also a strong influence in Haeckel, and lead him to think of Nature in anthropomorphic terms. 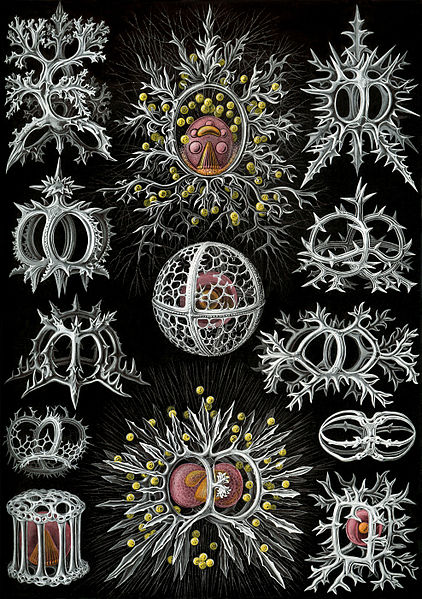 He became the most famous champion of Darwinism in Germany and he was so popular that, previous to the First World War, more people around the world learned about the evolutionary theory through his work “Natürliche Schöpfungsgeschichte” (The History of Creation: Or the Development of the Earth and its Inhabitants by the Action of Natural Causes) than from any other source. He also wrote more than twenty monographs about systematic biology and evolutionary history. He formulated the concept of  ”ecology” and coined the terms of “protist”,  “ontogeny”, “phylum”, “phylogeny”,  “heterochrony”, and “monera”.

Along with many other scientists, Haeckel was asked by the managers of the Challenger Expedition to examine and report on the expedition’s collections specifically for radiolarians, sponges and jellyfish. Haeckel’s Report on Radiolaria took him almost a decade. He reported a total of 739 genera and 4318 species of Radiolaria (polycystines, acantharians and phaeodarians). 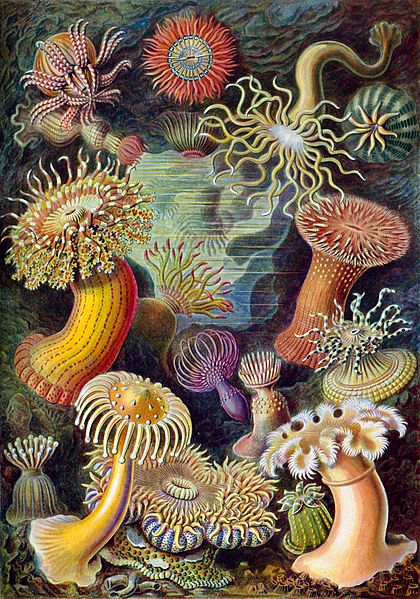 His master work “Kunstformen der Natur” (Art forms of Nature) influenced not only science, but in the art, design and architecture of the early 20th century. Initially published in ten fascicles of ten plates each – from 1899 to 1904 -, coincided with his most intensive effort to popularise his monistic philosophy in Die Welträthsel and Die Lebenswunder.

But Haeckel was a man of contradictions. His belief in Recapitulation Theory (“ontogeny recapitulates phylogeny”) was one of his biggest mistakes. His affinity for the German Romantic movement influenced his political beliefs and Stephen Jay Gould wrote that Haeckel’s biological theories, supported by an “irrational mysticism” and racial prejudices contributed to the rise of Nazism. Despite those faults, he made great contributions in the field of biology and his legacy as scientific illustrator is extraordinary. In 1908, he was awarded with the prestigious Darwin-Wallace Medal for his contributions in the field of science.

Robert J. Richards, The Tragic Sense of Life: Ernst Haeckel and the Struggle over Evolutionary Thought, (2008), University of Chicago Press.

Heie, N. Ernst Haeckel and the Redemption of Nature, 2008.

David Lazarus, The legacy of early radiolarian taxonomists, with a focus on the species published by early German workers, Journal of Micropalaeontology 2014, v.33; p3-19. 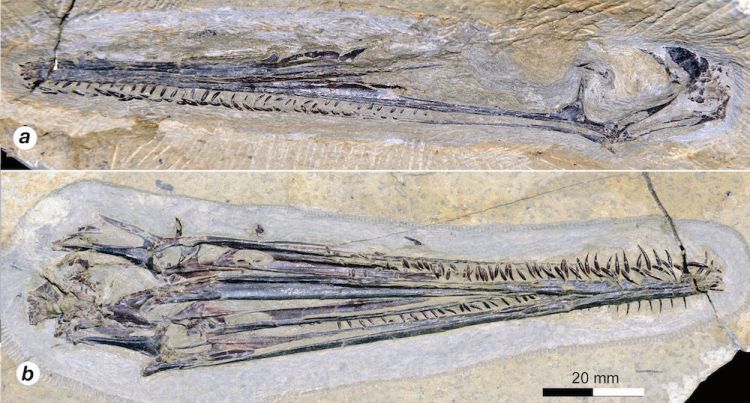 Pterosaurs are an extinct monophyletic clade of ornithodiran archosauromorph reptiles from the Late Triassic to Late Cretaceous. The group achieved high levels of morphologic and taxonomic diversity during the Mesozoic, with more than 150 species recognized so far. During their 149 million year history, the evolution of pterosaurs resulted in a variety of eco-morphological adaptations, as evidenced by differences in skull shape, dentition, neck length, tail length and wing span. Pterosaurs have traditionally been divided into two major groups, “rhamphorhynchoids” and “pterodactyloids”. Rhamphorhynchoids are characterized by a long tail, and short neck and metacarpus. Pterodactyloids have a much larger body size range, an elongated neck and metacarpus, and a relatively short tail. Darwinopterus from the early Late Jurassic of China appear to be a transitionary stage that partially fills the morphological gap between rhamphorhynchoids and pterodactyloids.

Pterodactyloidea, the most species-diverse group of pterosaurs, ruled the sky from Late Jurassic to the end of Cretaceous. Liaodactylus primus, a new specimen, discovered in northeast China’s Liaoning province, documents the only pre-Tithonian (145–152 Ma) pterodactyloid known with a complete skull, shedding new light on the origin of the Ctenochasmatidae, a group of exclusive filter feeders, and the timing of the critical transition from fish-catching to filter-feeding, a major ecological shift in the early history of the pterodactyloid clade. The holotype specimen is a nearly complete skull (133 mm long) and mandibles, with the first two cervical vertebrae preserved in articulation with the skull. The elongation of the rostrum, almost half the length of the skull, is accompanied by a significant increase in the number of marginal teeth, giving a total of 152 teeth in both sides of the upper and lower jaws. The teeth are closely spaced to form a ‘comb dentition’, a filter-feeding specialization. 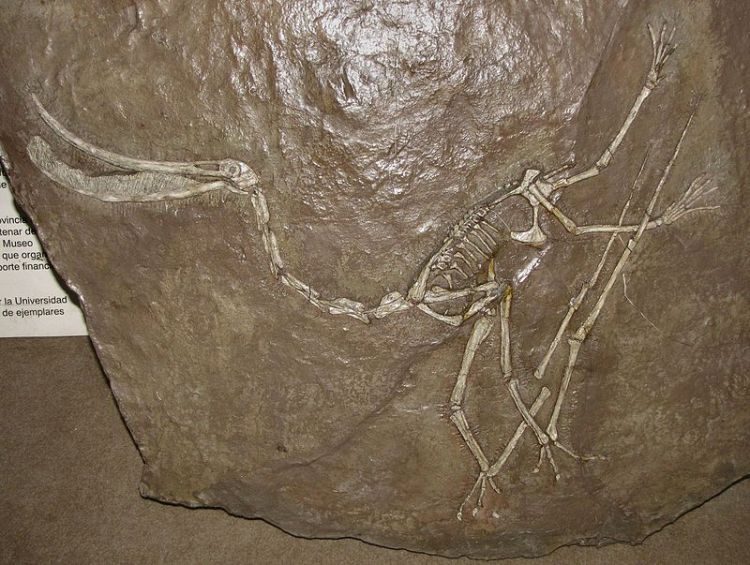 Liaodactylus is the oldest known ctenochasmatid, predating the previously Tithonian (152 Ma) record (Gnathosaurus and Ctenochasma from Germany) by at least 8–10 Myr . The Ctenochasmatidae, represents a long-ranged clade (160–100 Ma), and the only pterodactyloid clade that crossed the Jurassic-Cretaceous transition. The group includes the Early Cretaceous Pterodaustro from Argentina. Popularly called the ‘flamingo pterosaur’, Pterodaustro represents the most remarkable filter-feeding pterosaur known from the fossil record, with a huge number (more than 1000) of densely spaced ‘teeth’ (elastic bristles) in its lower jaws, for filtering small crustaceans, microscopic plankton or algae from open water along lake shores.

Pterosaurs display an extraordinary eco-morphological disparity in feeding adaptations, expressed in skull, jaws and dentition. The Late Triassic Eopterosauria, the basalmost pterosaur clade, were mainly insectivorous. Jurassic insectivores include the Dimorphodontia, Campylognathoididae and Darwinoptera, whereas the Anurognathidae were the only Jurassic insectivores that survived the Jurassic–Cretaceous transition, but became extinct in the Early Cretaceous. The rise of the ctenochasmatid clade was the first major ecological shift in pterosaur evolution from insectivorous-piscivorous to filter-feeding. During Cretaceous time,  the Eupterodactyloidea, a group of advanced pterodactyloids, engaged in a variety of feeding adaptations, including filter-feeding, fish-eating, carnivory and scavenging, herbivory including frugivory, durophagy and omnivory. The Early Cretaceous tapejarids may have been herbivorous, while the pteranodontids, with large skull but tapering and toothless jaws were suitable for seizing fish in open-water environments. Finally, the Late Cretaceous azhdarchids have been hypothesized as foragers feeding on small animals and carrion in diverse terrestrial environments. 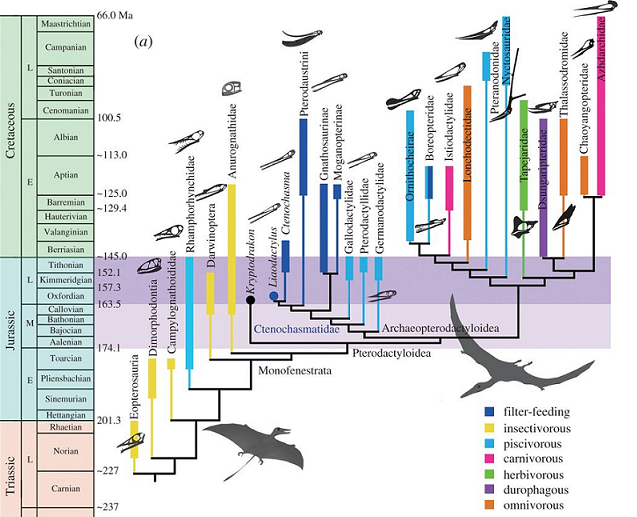