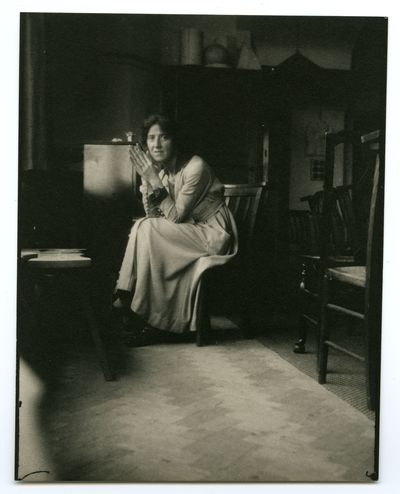 George Bernard Shaw once wrote: “All progress is initiated by challenging current conceptions”. Those words describe exactly what Marie Stopes did during her entire life. Her book,  Married Love (1918), is considered one of the most influential of the 20th century. A dedicated feminist, her views on birth control and contraception drew to her the hostile attentions of conservative forces in British Society, and Stope’s ideas were attacked through an assault of her own character. But in addition to her well-known work on birth control and women’s rights, she was a prolific poet, playwright and a paleobotanist.

Marie Charlotte Carmichael Stopes was born in Edinburgh, Scotland, on October 15, 1880. Her father, Henry Stopes, a brewer, architect and amateur paleontologist and archeologist, amassed the largest private collection of fossils and ancient stone tools in Britain. Her mother, Charlotte Carmichael, wrote British Freewomen: Their Historical Privilege. The book, published in 1894, was a great influence in the early twentieth century British women’s suffrage movement. They were both members of the British Association for the Advancement of Science.

Just before her twentieth birthday, Marie enrolled at University College London where she studied botany and geology. She graduated with honours after only two years and received the Gold Medal in Botany. At UCL she was employed by Francis Wall Oliver as a postgraduate research assistant on his pteridosperm project with Dukinfield Henry Scott. Shortly after, she went to study at the University of Munich, and received a Ph.D. in palaeobotany in 1904. She was the only female student among 5.000 men. During that time, she worked on the internal anatomy of cycad seed. In August 1904, Marie got her first academic job at the Victoria University of Manchester. She became more interested in Carboniferous coal balls. These concretions of calcite, dolomite, siderite, and pyrite, occur at many localities in northern England and preserved in beautiful anatomical detail the structure of the plants that formed the coal.

In 1907, she convinced the Royal Society to fund an excursion to Japan. During her work, she found what were then the earliest known flowers and fossil insects from the Cretaceous period. In 1910, she was commissioned by the Geological Survey of Canada to determine the age of the Fern Ledges, a geological structure at Saint John, New Brunswick. She proved that the rocks were Carboniferous and not Devonian or Silurian as others had earlier argued (Falcon-Lang, 2008).

FALCON-LANG, H.J. & MILLER, R.F. 2007. Marie Stopes and the Fern Ledges of Saint John, New Brunswick. In Burek, C.V. (ed.) The Role of Women in the History of Geology. Special

Dinosaurs likely originated in the Middle Triassic and the first unequivocal dinosaur fossils are known from the late Carnian, but much about the geological and temporal backdrop of early dinosaur history remains poorly understood. A key question is why early dinosaurs were rare and species-poor at low paleolatitudes throughout the Late Triassic Period, for at least 30 million years after their origin.

The oldest well-dated identified dinosaurs are from the late Carnian (approx. 230 Ma) of the lower Ischigualasto Formation in northwestern Argentina. Similarly, the Santa Maria and Caturrita formations in southern Brazil preserve basal dinosauromorphs, basal saurischians, and early sauropodomorphs. In North America, the oldest dated occurrences of vertebrate assemblages with dinosaurs are from the Chinle Formation, but are less abundant and species rich compared to those from South America. The fact that those assemblages were at moderately high paleolatitudes during the Late Triassic, and the North American assemblages were near the paleoequator supports the hypotheses for a diachronous rise of dinosaurs across paleolatitudes (Irmis et al., 2011).

The Late Triassic is marked by a return to the “hothouse” condition of the Early Triassic, with two greenhouse crisis that may also have played a role in mass extinctions and long-term evolutionary trends (Retallack, 2013). The paleoclimate was a very arid with intense evaporation rate. Although there was at least one time of significant increase in rainfall known as the “Carnian Pluvial Event”, possibly related to the rifting of Pangea. Now, a multiproxy study  suggests  that fluctuating aridity in tropical and subtropical Pangea could explain why Triassic dinosaur faunas at low latitudes are restricted to small, slower growing carnivorous forms, whereas large-bodied herbivores, including sauropodomorph dinosaurs, are absent at low paleolatitudes during the Late Triassic “hothouse.” The palynomorphs recovered from sediments of the Chinle Formation indicate a major change from a seed fern-dominated (Alisporites) assemblage with accessory gymnosperms to one dominated by conifers and seed ferns in the lower portion of the Petrified Forest Member. In addition, the extensive charcoal record in the Petrified Forest Member provides evidence of paleo-environmental variability and aridity.

The transition from Triassic to Early Jurassic is marked by a major biotic crisis in the marine and terrestrial realms. In the oceans, this event eliminated conodonts and nearly annihilated corals, ammonites, brachiopods and bivalves. In land, most mammal-like reptiles and large amphibians disappeared, as well as early dinosaur groups. During the Jurassic (201-145 mya) the breakup of the supercontinent Pangaea continued and accelerated with the opening of the North Atlantic by the rifting of Africa and North America, giving rise to the supercontinents of Laurasia and Gondwana. The sea level rise flooded continental areas around Pangaea, forming huge epicontinental seas, especially in northern Africa and eastern Laurasia (modern China). The world was predominantly warm with at least four times the present level of atmospheric CO2. The period is also characterized by the explosive adaptive radiation of dinosaurs and the diversification of the cycads.

The Early Jurassic climate was characterized by a global warming, with average summer temperatures that exceeded  35°C in low-latitude regions of western Pangaea where eolian sandstones testify to the presence of vast deserts (Holz, 2015). The early Toarcian Oceanic Anoxic Event  (T-OAE; ∼183 mya) is considered as one of the most severe of the Mesozoic era. It’s associated with a major negative carbon isotope excursion, mass extinction, marine transgression and global warming (Huang, 2014, Ullmann et al., 2014). The T-OAE has been extensively studied in the past three decades although there is no consensus about the causes or triggering mechanisms behind this event.

After the extinction of many carnivorous crurotarsan lineages (phytosaurs, ornithosuchids, rauisuchians) at the Triassic–Jurassic boundary, theropod dinosaurs increased their diversity and exhibit a greater range of morphological disparity. Sauropodomorphs also achieved a worldwide distribution and become more graviportal and increased their body size. The presence of early armored dinosaurs (thyreophorans) in North America, Asia, and Europe, but their absent from the southern African record, suggests some degree of provinciality in early ornithischian faunas (Brusatte et al., 2010).

By the Mid-Jurassic, Gondwana started to break up in different blocks: Antarctica, Madagascar, India, and Australia in the east, and Africa and South America in the west, with relatively warm sea-surface conditions (26–30◦C) from Mid-Jurassic (∼160Ma) to the Early Cretaceous (∼115Ma) in the Southern Ocean.  There was a drastic climatic decline during the Late Callovian. This decline in temperature lasted about 2.6My and is know as the “Callovian Ice Age”. It has been interpreted in terms of an inverse greenhouse effect, triggered by drawdown of CO2 consequent upon excess carbón burial (Dromart et al, 2003).  The Puchezh-Katunki impact crater in Russia is prior to the Callovian extinction event and is not considered as a factor for this biotic extinction event.

During the Late Jurassic, North America completed its separation from Gondwana, and Gondwana was split into a northern and southern continent by the rift system opening the proto-Indian Ocean. The geological and geochemical record suggest that low-latitude environments were arid and tropical ever-wet conditions were absent. Maximum plant diversity was concentrated at midlatitudes, whith forests dominated by a mixture of conifers, cycadophytes, pteridosperms, ferns, and sphenophytes.