The Cretaceous beds of Patagonia have yielded the most comprehensive record of Cretaceous theropods from Gondwana and includes at least five main theropod lineages: Abelisauroidea, Carcharodontosauridae, Megaraptora, Alvarezsauridae, and Unenlagiidae. The best represented theropod clades in the Late Cretaceous terrestrial strata of the Neuquén Basin are the Abelisauroidea and the Carcharodontosauridae. Most discoveries come from continental units of ages ranging from Barremian to Maastrichtian. The lowest levels of the Cretaceous are well exposed in the marine and terrestrial deposits of the Mulichinco and Bajada Colorada formations.
The Carcharodontosauridae includes the largest land predators in the early and middle Cretaceous of Gondwana, like the popular Giganotosaurus carolinii, and in some way, they were considered as ecological equivalents to the Laurasian tyrannosauroids. The group evolved large skulls surpassing the length of the largest skull of Tyrannosaurus rex; and some derivaded forms had heavily sculptured facial bones. Another common trait is the fusion of cranial bones. Lajasvenator ascheriae, a new specimen from the Valanginian Mulichinco Formation, represents the oldest Cretaceous carcharodontosaurid from South America. The name derived from the Lajas, the city near where the specimen was found; and venator, a Latin word for hunter. The specific name honors Susana Ascheri, owner of the land where the fossil was discovered. 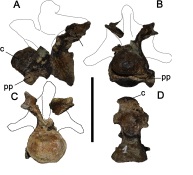 The holotype (MLL-PV-005) of this medium-sized theropod is an incomplete but partially articulated skeleton that includes a partial skull, partially articulated presacral vertebral series, four articulated caudal vertebra and fragments of the pelvic girdle. A second specimen (MLL-PV-Pv-007) includes the anterior ends of both dentaries, a quadratojugal, and fragments of cervical vertebrae, ribs and a possible tarsal bone. The holotype of Lajasvenator was collected in 2010 during fieldwork at Pilmatué. The second specimen was recovered in 2012.

Herrerasauridae is a basal clade of predatory, obligatorily bipedal dinosaurs recorded from the Upper Triassic of Argentina and Brazil (although are putative records of herrerasaurids from the mid-late Norian strata of Europe and North America). The clade unequivocally comprises three species: Herrerasaurus ischigualastensis, Sanjuansaurus gordilloi, both from the Ischigualasto Formation of Argentina, and Staurikosaurus pricei, from the lower portion of the Santa Maria Formation of southern Brazil. Now, a new specimen from the Santa Maria Formation shed light into poorly understood aspects of the Herrerasauridae anatomy.

Named Gnathovorax cabreirai, the new dinosaur was found in 2014 at the Marchezan site, municipality of São João do Polêsine, Rio Grande do Sul, Brazil. The generic name means “jaws inclined to devour”. The specific name honors Dr. Sérgio Furtado Cabreira, the palaeontologist that found the specimen. The Santa Maria Formation in southern Brazil, comprises a succession of Middle to Late Triassic sedimentary rocks that have been long renowned for their rich tetrapod fossils including one of the oldest (and the best preserved) associations of dinosaur and dinosaur precursor.

Photographs and reconstruction of the braincase and endocast of Gnathovorax cabreirai. From Pacheco et al., 2019.

Gnathovorax lived around 230 million years ago and measured about three meters in length. The holotype (CAPPA/UFSM 0009) is an almost complete and partially articulated skeleton. The skull is almost entirely preserved. Among other characters, Gnathovorax presents three premaxillary teeth; an additonal fenestra between the maxilla and premaxilla contact; two well defined laminae in the antorbital fossa of the maxilla, with a depression between them. The proximal portion of the femur lacks a caudomedial tuber. The tibia equals 90% of the femoral length and there are three phalanges in pedal digit V.

The study of the internal anatomy of the skull through CT-scanning reveals several aspects of the neuroanatomy of this group. The presence of a well-developed floccular fossa lobes of the cerebellum is related to motor control of the eye and head, which in turn may be related to the predatory habit of the group.

Preserved elements of the holotype of Ferrisaurus sustutensis. From Arbour and Evans, 2019.

In 1971, during uranium and thorium exploration in the Sustut Basin of northern British Columbia, Canada, Kenny F. Larsen registered above-background levels of radiation from a talus slope near the confluence of Birdflat Creek and the Sustut River. The source of this radiation were the fossil remains of an unknow dinosaur. Larsen, an economic geologist, donated the bones to the Dalhousie University (Halifax, NS) in 2004. Later, the specimen was accessioned into the collection of the Royal British Columbia Museum in Victoria, BC.

Initially described as a pachycephalosaur or a basal ornithopod similar to Thescelosaurus, a new study determined that the remains belongs to a new genus and species: Ferrisaurus sustutensis. The holotype (RBCM P900) includes portions of the pectoral girdles, left forelimb, left hindlimb, and right pes. The name derived from Latin ferrum (=iron) and Greek sauros (=lizard), referencing to the specimen’s discovery along a railway line. The specific name honors its provenance near the Sustut River and within the Sustut Basin. 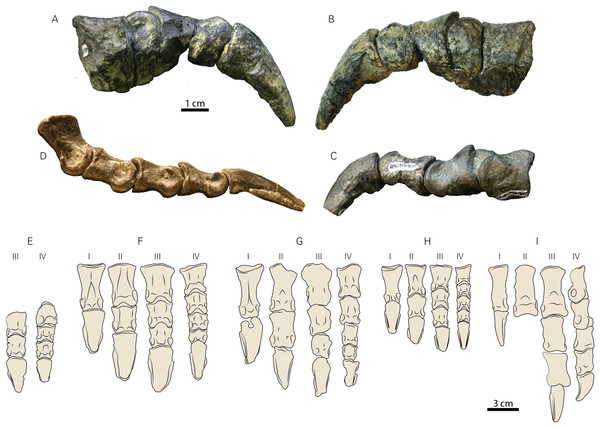 Pedal elements of Ferrisaurus sustutensis compared to other Laramidian small-bodied ornithischians. From Arbour and Evans, 2019.

Despite the lack of cranial material Ferrisaurus can be placed within leptoceratopsids based on several aspects of the preserved phalanges. Leptoceratopsids were short-frilled, hornless ceratopsians that lived in Campanian–Maastrictian aged dinosaur assemblages from Asia and North America. Ferrisaurus measured about 1.75 metres in length and 150 kilograms in weight and is similar in size to large specimens of Leptoceratops and Cerasinops.