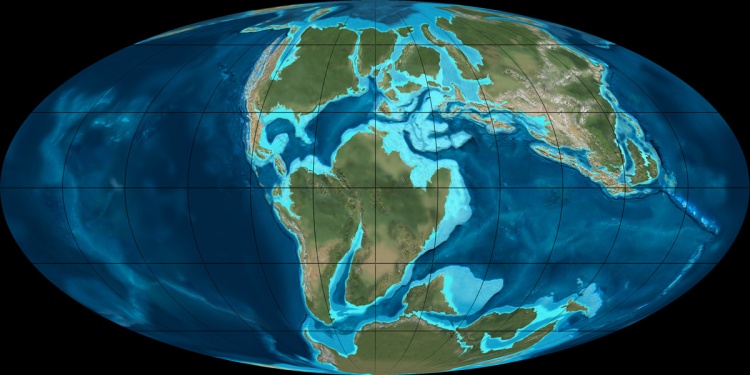 The geological records show that large and rapid global warming events occurred repeatedly during the course of Earth history. The growing concern about modern climate change has accentuated interest in understanding the causes and consequences of these ancient abrupt warming events. The early Aptian Oceanic Anoxic Event (OAE1a, 120 Ma) represents a geologically brief time interval characterized by rapid global warming, dramatic changes in ocean circulation including widespread oxygen deficiency, and profound changes in marine biotas. During the event, black shales were deposited in all the main ocean basins. It was also associated with the calcification crisis of the nannoconids, the most ubiquitous planktic calcifiers during the Early Cretaceous. Their near disappearance is one of the most significant events in the nannoplankton fossil record.

Calcareous nannoplankton represent a major component of oceanic phytoplankton. Their calcareous skeletons can be found in fine-grained pelagic sediments in high concentrations and the biomineralization of coccoliths is a globally significant rock-forming process. The ‘nannoconid decline’ is related to the emplacement of the Ontong Java Plateau (OJP). The  CO2 released by the flood basalts was the main player in the climatic events. However, records from the Pacific and Tethys realms demonstrate that during OAE 1a the  major shift in global oceanic osmium composition occurs well after the onset of the nannoconid crisis. Previous studies argued that the nannoconid crisis was caused by ocean acidification due to numerous pulses of CO2 and methane. The Ontong Java Plateau is a massive, submerged seafloor.  It covers an area of about 1,900,000 square kilometers. It  was emplaced ca. 120 Ma, with a much smaller magmatic pulse of ca. 90 Ma. The CO2 release was too late, and too gradual, to have caused the calcification crisis in the nannoconids by ocean acidification 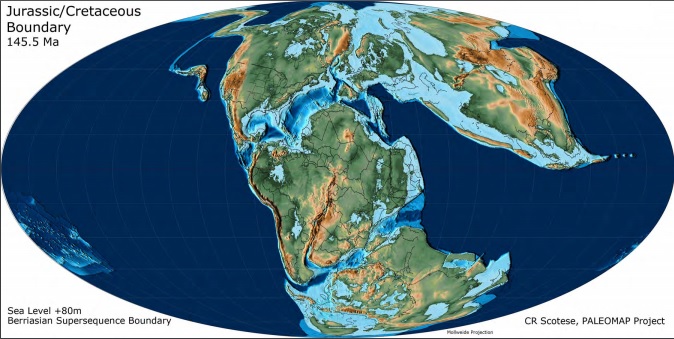 Map of the Jurassic/Cretaceous Boundary by C. Scotese.

The Jurassic/Cretaceous (J/K) boundary, 145 Myr ago, remains as the less understood of major Mesozoic stratigraphic boundaries. Sedimentological, palynological and geochemical studies, indicate a climatic shift from predominantly arid to semi arid conditions in the latest Jurassic to more amicable humid conditions in the earliest Cretaceous. The continued fragmentation of Pangaea across the Late Jurassic and Early Cretaceous led to large-scale tectonic processes, on both regional and global scale, accompanied by some of the largest volcanic episodes in the history of the Earth; eustatic oscillations of the sea level; potentially heightened levels of anoxia, oceanic stagnation, and sulphur toxicity; along with two purported oceanic anoxic events in the Valanginian and Hauterivian. There’s also evidence of three large bolide impacts in the latest Jurassic, one of which might have been bigger than the end-Cretaceous Chicxulub impact. 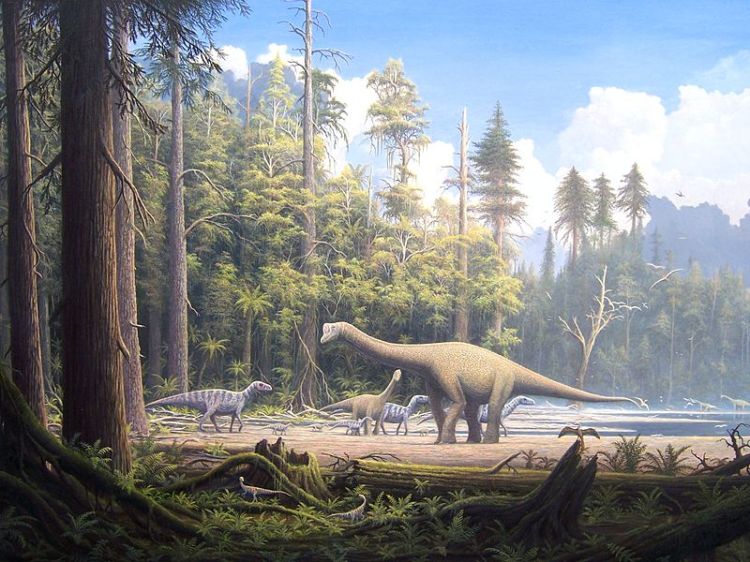 The J/K interval represents a period of elevated extinction, and involves the persistent loss of diverse lineages, and the origins of many major groups that survived until the present day (e.g. birds). The magnitude of this drop in diversity ranges from around 33% for ornithischians to 75–80% loss for theropods and pterosaurs. Mammals suffered an overall loss of  diversity of 69%. Crocodyliforms suffered a major  decline across the Jurassic/Cretaceous boundary in both the marine and terrestrial realms; while non-marine turtles declined by 33% of diversity through the J/K boundary. In contrast, lepidosauromorphs greatly increased in diversity (48%) across the J/K boundary, reflecting the diversification of major extant squamate clades, including Lacertoidea, Scincoidea and Iguania.

In the marine realm, sauropterygians and ichthyosaurs show evidence for a notable decline in diversity across the J/K boundary, which continued into the Hauterivian for both groups. 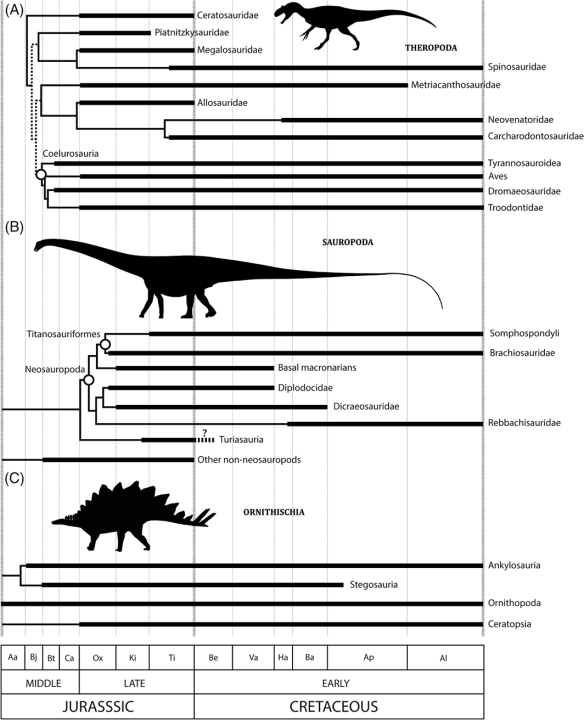 Stratigraphic ranges of major Jurassic–Cretaceous theropod (A), sauropod (B), and ornithischian (C) dinosaur clades through the Middle Jurassic to Early Cretaceous (From Tennant et al,. 2016)

Eustatic sea level is the principal mechanism controlling the Jurassic–Cretaceous diversity of tetrapods. Rising sea levels leads to greater division of landmasses through creation of marine barriers, modifying the spatial distribution of near-shore habitats and affecting the species–area relationship, which can lead to elevated extinctions. This fragmentation can also be a potential driver of biological and reproductive isolation and allopatric speciation, the combination of which we would expect to see manifest in the diversity signal. Additionally, the diversity of fully marine taxa was more probably affected by the opening and closure of marine dispersal corridors, whereas that of terrestrial and coastal taxa was more probably dependent on the availability of habitable ecosystems, including the extent of continental shelf area (Tennant, et al., 2016).