At the beginning of the nineteenth century George Cuvier, the great French anatomist and paleontologist,  suggested that periodic “revolutions”, or catastrophes had befallen the Earth and wiped out a number of species, but under the influence of Lyell’s uniformitarianism, Cuvier’s ideas were rejected as “poor science”. One century after Cuvier definition of catastrophism, Chamberlain proposed that faunal major changes through time were under the control of epeirogenic movement of the continents and ocean basins. Despite Chamberlain’s article, the modern study of mass extinction did not begin until the middle of the twentieth century with a series of papers focused on the Permian extinction. One of the most popular of that time was “Revolutions in the history of life” written by Norman Newell in 1967.

Mass extinctions had shaped the global diversity of our planet several times during the geological ages. They are major patterns in macroevolution. Andrew Knoll defines them as perturbations of the biosphere which seem instantaneous when it is observed through the geological record. 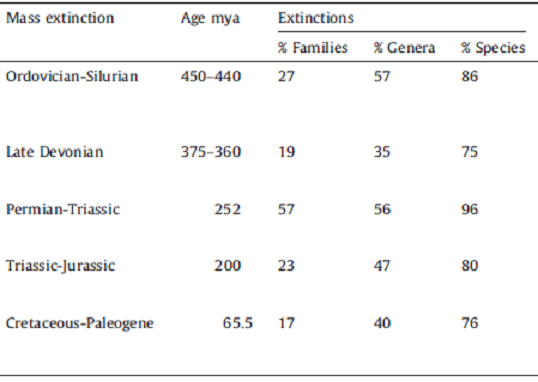 In 1982, Jack Sepkoski and David M. Raup identified five mass extinctions. The first took place at the end of the Ordovician period, about 450 million years ago.  Now, according to the current rates of extinction, we are in the midst of  the so called “Sixth Mass Extinction”.

Mass extinctions are probably due to a set of different possible causes like basaltic super-eruptions, impacts of asteroids, global climate changes, or continental drift. But now, a group of scientists like Edward O. Wilson and Niles Eldredge identified post-industrial humans as the driving force behind the current and on-going mass extinction (Braje, 2013).

The human arrival was a “key component” in the extinction of the megafauna during the late Quaternary. In North America, approximately 34 genera (72%) of large mammals went extinct between 13,000 and 10,500 years ago, including mammoths, mastodons, giant ground sloths, horses, tapirs, camels, bears, saber-tooth cats, and a variety of other animals. South America lost an even larger number and percentage, with 50 megafauna genera (83%) becoming extinct at about the same time.

Other extinctions on island ecosystems around the world are result from direct human hunting, anthropogenic burning and landscape clearing, and the translocation of new plants and animals. One of the most famous and well-documented of these extinctions come from Madagascar. Pygmy hippos, giant tortoises, and large lemurs went extinct due to human hunting or habitat disturbance. A very interesting study by Burney et al. (2003) tracked the decline of coprophilous Sporormiella fungus spores in sediments due to reduced megafaunal densities after the human arrival on the island.  Another well documented case is the Moa extinction in New Zealand. Recent radiocarbon dating and population modeling suggests that their disappearance occurred within 100 years of first human arrival. A large number of  landbirds across Oceania suffered a similar fate beginning about 3500 years ago.

The anthropogenic effects increasingly took precedence over natural climate change as the driving forces behind plant and animal extinctions with the advent of agriculture and the domestication of animals.

Amphibians offer an important signal to the health of biodiversity; when they are stressed and struggling, biodiversity may be under pressure.   Today, they are the world’s most endangered class of animal, while corals have had a dramatic increase in risk of extinction in recent years. Some biologist predict that the sixth extinction  may result in a 50% loss of the plants and animals on our planet by AD 2100, which would cause not only the collapse of ecosystems but also the loss of food economies, and medicinal resources.

The acceleration of extinctions over the past 50,000 years, in which humans have played an increasingly important role, has left a number of hard questions about how the Anthropocene should be defined and whether or not extinctions should contribute to this definition (Erlandson, 2013)

Mayhew, Peter J.; Gareth B. Jenkins, Timothy G. Benton (January 7, 2008). “A long-term association between global temperature and biodiversity, origination and extinction in the fossil record”. Proceedings of the Royal Society B: Biological Sciences 275 (1630): 47–53. 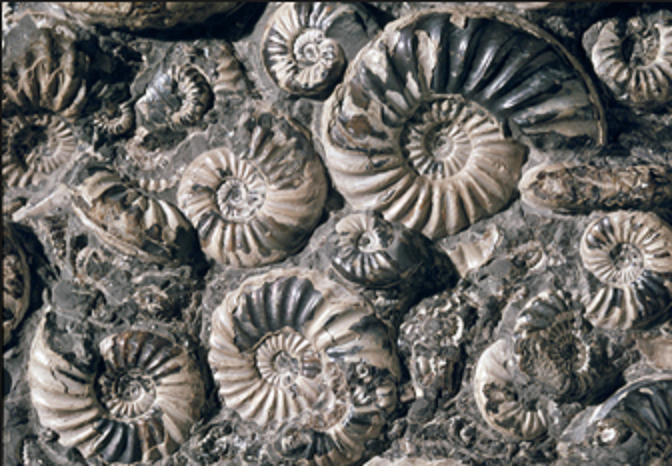 Ammonites are the common name given to the subclass Ammonoidea, an extinct order of cephalopod. The first occurrence of ammonites is from the Devonian around 400 million years ago. The last surviving lineages disappeared, along with the dinosaurs, 65 million years ago in the Cretaceous–Paleogene extinction event.

Since antiquity, ammonites has been associated with myths, legends, religion and even necromancy. They were known as “Cormu Ammonis”, “Corni de Ammone” or “Cornamone” because their shapes resemble the tightly coiled rams horns used to represent the Egyptian god Ammon. Pliny the Elder (AD 23 – August 25, AD 79) referred them in his monumental work Naturalis Historia. He wrote: “The Hammonis cornu is among the holiest gems of Ethiopia, it is golden in colour and shows the shape of a rams horn; one assures that it causes fortune-telling dreams”. This could be explained because pyritised ammonites have a sparkling, golden appearance.

The salagramas are ammonites worshipped as divine symbols of Vishnu—the four-armed God, Sustainer of the Universe who holds a disc or wheel (chakra) in one of his hands.  In China, were described as horn stones ( jiao-shih) and they being used as an ancient remedy. Japanese referred them as chrysanthemum stones (kiku-ishi) and Buddhists interpreted them as a symbol of enlightenment.

Jeletzkytes spedeni, a fossil ammonite from USA. From Wikimedia Commons.

They have been interpreted as petrified venomous snake (“ophites”) often called “serpentstones”. In medieval England, they were considered evidence for the actions of saints such Saint Patrick or St. Hilda of Whitby. According to tradition, these fossil Ammonites were  serpents that infested the region of Whitby,  before the coming of St. Hilda. This is cited in Sir Walter Scott’s Marmion:

“… Of thousand snakes, each one

Was changed into a coil of stone,

Themselves, within their holy bound,

Their stony folds had often found.” 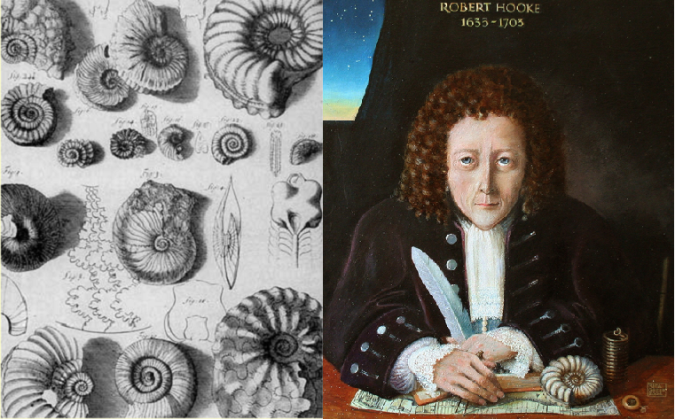 Georgius Agricola, often named as “the father of mineralogy” and author of De Re Metallica, a work based on Pliny’s work Historia Naturalis, also referred them as Ammonis Cornu.  Conrad Gessner include some ammonite’s illustration is his work De rerum fossilium (1565). But even toward the end of 17th century the ammonite organic nature was still under debate. Robert Hooke was fascinated by the logarithmic coil of ammonite shells and their regularly arranged septa. He reached the conclusion that ammonites are not only of organic origin but also widely resemble Nautilus. A landmark in ammonite research was the classification scheme given by Johann Jacob Scheuchzer in 1716.

The modern form of the word ammonite was coined by the French zoologist Jean Guillaume Bruguière (c.1750-1798) in 1790, but only in 1884 the subclass Ammonoidea was formalized in zoological taxonomy.

About thirty years ago, the discovery of anomalously high abundance of iridium and other platinum group elements in the Cretaceous/Palaeogene (K-Pg) boundary led to the hypothesis that a 10 km asteroid collided with the Earth and caused one of the most devastating events in the history of life. The impact created the 180-kilometre wide Chicxulub crater causing widespread tsunamis along the coastal zones of the surrounding oceans and released an estimated energy equivalent of 100 teratons of TNT and produced high concentrations of dust, soot, and sulfate aerosols in the atmosphere. The vapour produced by the impact  could have led to global acid rain and a dramatic acidification of marine surface waters. Calcareous nanoplankton (primarily the coccolithophores) and planktonic foraminifera had the highest extinction rates among the marine plankton.

But the exact mechanism that lead to the demise of the 75%  of all life on Earth including the non-avian dinosaurs still remain debated. To test the hypothesis that acid rain could have caused the extinction patterns observed, Sohsuke Ohno and colleagues at the Chiba Institute of Technology in Japan mounted natural anhydrite – the bedrock of the Chicxulub crater is largely anhydrite –   in a vacuum chamber with a chemically inert, high density tantalum metal plate backed with a plastic ablator a short distance from it.  The team used lasers to fire impactors into anhydrite test samples at velocities of 13 to 25 kilometres per second, very similar to the speeds expected in an asteroid impact.

The mass spectrometer analysis, showed  there was more sulphur trioxide molecules than sulphur dioxide. Sulphur trioxide reacts quickly with atmospheric water vapour and form sulphuric acid aerosols. These sprays adhere to particles heavier silicates ejected into the atmosphere by the impact, returning to the surface much faster than previously thought. These results could also explain the so called fern spike right after the impact event, because ferns are one of the most tolerant plants for dealing with those conditions. 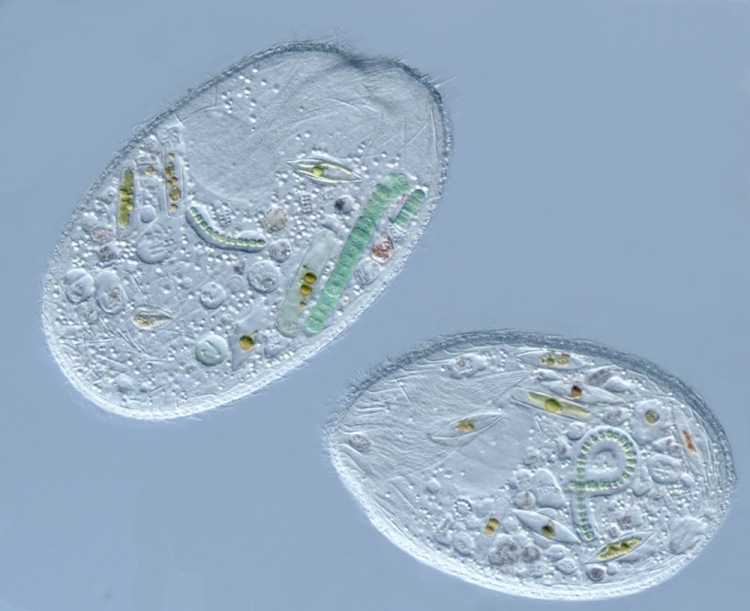 In 1883, the first person to suggested the endosymbiotic nature of eukaryotic cells was the German botanist Andreas Schimper, and in 1926 Russian botanist Konstantin Mereschkowsky and American biologist Ivan Wallin, postulated the idea that symbiosis is the main driving force of evolution in their book “Symbiogenesis and the Origin of Species”. In 1981, American Biologist Lynn Margulis published ”Symbiosis in Cell Evolution” and proposed that the complexity of the eukaryotic cell was assembled over a long time period by symbiotic associations between different kinds of prokaryotes and an amitochondriate protozoa host.

The mosaicism of the eukaryotic genome is challenging. Bacteria, Archaea, and Eukarya share common ancestry but they have very distinctive features. Eukarya are similar to Archaea for some systems like the replication, transcription,and translation apparatuses and to Bacteria for others like metabolism and membrane chemistry (Rochette, 2014), so the different hypotheses are associated with different phylogenomic prediction.

All these hypotheses can be classified into three main classes: hypotheses involving endosymbiosis, which argue that components of the eukaryotic cell arose by engulfment of prokaryotic organisms,  hypotheses for autogenous (‘self-birth’) pathways for eukaryotic cell components, and a “ternary” hypotheses suggest that the organism that engulfed the ancestor of mitochondria was itself a chimera of two prokaryotes.
The “hydrogen hypothesis” (Martin and Müller 1998) involves endosymbiosis and implies that ancestral eukaryotic genes are derived from the alphaproteobacterial ancestor of mitochondria and from the methanogenic euryarchaeon that hosted it. The Neomura hypothesis (Cavalier-Smith 2010b) is among the autogenous hypotheses and assumes that Eukarya are the sister group of all Archaea. Finally, a popular ternary hypothesis is the “endokaryotic” hypotheses in which the nucleus derives from an archaeon while the cytoplasm derives from a bacterium (Lake and Rivera 1994).
A recent analysis establishes that there is no phylogenomic support in favor of ternary hypotheses and support that Eukarya branch close to Archaea or basally within them and that some early-mitochondria hypotheses are compatible with current genomic data under certain assumptions (Rochette, 2014). 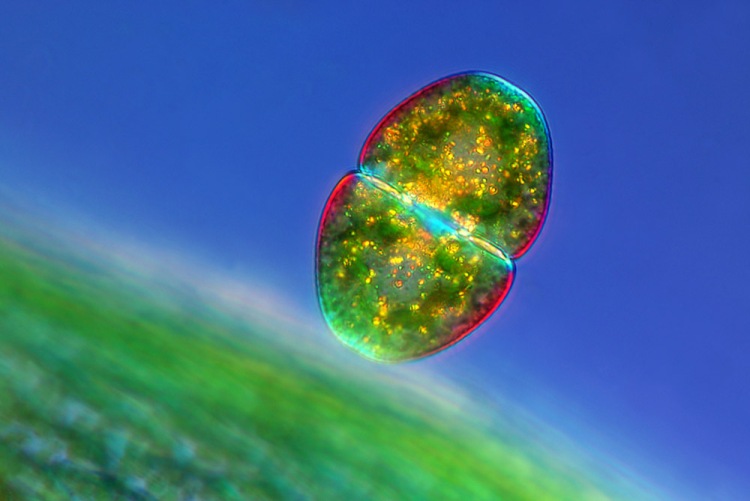