Silicoflagellates belong to a small group of marine planktonic organisms with siliceous skeletons composed of opaline rods. The cell size  ranges from 20 to 80 μm (1). They could be both autotrophic and heterotrophic, and live associate with blue-green algae. They have two flagella and  thin pseudopodia, but based on their pigmentation, mitochondria, chloroplasts and siliceous skeleton, silicoflagellates are considered golden algae or chrysophytes.

The basic structure for the skeleton   consist of a basal ring, with or without radial spines and accessory basal spines and an apical ring slightly curved or dome-shaped. The joints of the various types of bars generate hollows known as portals or windows (2)

One exception to this body plan is the extinct genus Lyramula, which has no basal ring and exhibits two curving arms.

Silicoflagellates comprise only between 1 and 2% of the siliceous components of marine sediments and are more abundant in waters of the equatorial upwelling zone. They often find in diatomaceous earth deposits and are very sensitive indicators of temperature.

Silicoflagellates first appeared in Early Cretaceous sediments and extend to the present, but were more abundant during the Late Cretaceous. They are used in biostratigraphy, especially in high latitudes and deep waters, where calcareous microfossils are scarce or are dissolved. Their morphologies can be influenced by environmental factors a condition that allows them to develop  potential as environmental indicators,especially with respect to paleotemperatures.

It was the best of times. In the nineteenth century England, the Industrial Revolution started a time of important social and political change. London became the financial capital of the world. Several scientific societies were forming, such as the Geological Society of London and fascinating discoveries revealed part of the history of our planet. But it was also the worst of time. England was ruled by an elite, meanwhile most of the people were poor. Churches provided schools for poor children and infant mortality was high. During these difficult times, and despite her low social station, Mary Anning made some of the most significant geological finds of all time. She has been called “the Princess of Palaeontology”  by the German explorer Ludwig Leichhardt and scientists like William Buckland or Henry de la Beche owe their achievements to Mary’s work.

The shore of Lyme Bay where Mary Anning did most of her collecting.

Mary Anning was born on Lyme Regis on May 21, 1799. Her father was a carpenter and an amateur fossil collector who died when Mary was eleven. He trained Mary and her brother Joseph in how to look and clean fossils. After the death of her father, Mary and Joseph used those skills to search fossils on the local cliffs,  that sold as “curiosities”. The source of the fossils was the coastal cliffs around Lyme Regis, one of the richest fossil locations in England and part of a geological formation known as the Blue Lias. The age of the formation corresponds to the Jurassic period. 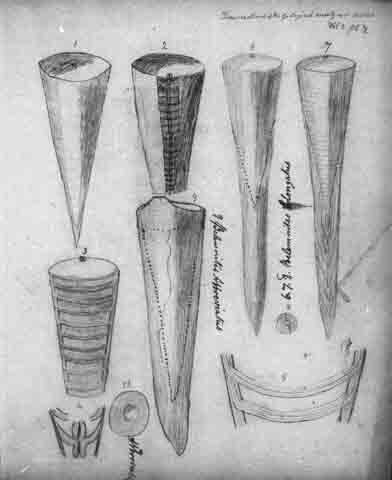 Invertebrate fossils, like ammonoids or belemnites, were the most common findings. But when Mary was 12, her brother Joseph found a skull protruding from a cliff and few month later, Mary  found the rest of the skeleton.  They sold it for £23. Later, in 1819, the skeleton was purchased by Charles Koenig of the British Museum of London who suggested the name “Ichthyosaur” for the fossil.

In 1823, Mary made another amazing discovery. She found the first complete Plesiosaurus. Mary immediately wrote to William Buckland,  the famous English geologist and paleontologist,  describing the strange skeleton. By the age of 27, Mary was the owner of a little shop: Anning’s Fossil Depot. Many scientist and fossil collectors from around the globe went to Mary´s shop. But she was considered an outsider for the  scientific community that often forgot to mention Mary’s name in the description of the specimens she found.

Nevertheless she was friend of Henry De la Beche, the first director of the Geological Survey of Great Britain, who knew Mary since they were both children and lived in Lyme Regis. De la Beche was a great supporter of Mary’s work. She also corresponded with Charles Lyell and Adam Sedgwick. On December, 1828, Mary found the first pterosaur skeleton outside Germany. William Buckland made the announcement in the Geological Society of London. Working with Buckland, Mary suggested that the “Bezoar stones”  were fossilized feces. Buckland published that conclusion in 1829 and named them coprolites. In 1834, Mary assisted the Swiss naturalist Louis Agassiz during his visits to Lyme Regis. In her later years, Mary suffered some serious financial problems. De la Beche helped her during those hard times. Also William Buckland persuaded the British Association for the Advancement of Science and the British government to award her an annuity of £25, in return for her many contributions to the science of geology. Mary Anning died of breast cancer on 9 March, 1847, at the age of 47. She was buried in the cemetery of St. Michaels. In 1865, Charles Dickens wrote an article about her life in his literary magazine “All the Year Round”. He ended the article with these phrase: “The carpenter’s daughter has won a name for herself, and has deserved to win it.”

Inge Lehmann was born on Copenhagen, Denmark on May 13, 1888. She attended at Copenhagen University where studied maths, physics, chemistry and astronomy. After pass her exams, Lehmann spent a year at Cambridge University.

In 1911, she returned to Copenhagen and worked for  an insurance company. Eight years later, Lehmann returned to the University and in 1920 earned a degree in Mathematics.

Her interest in seismology began in 1925 while she was working at the Royal Danish Geodetic Institute. She became head of the Institute in 1928, and held that place until 1953.

When a large earthquake affected New Zealand, on 16 June 1929, Lehmann studied the shock waves and made an amazing discovering:  some  P-waves, which should have been deflected by the core, were in fact recorded at seismic stations. Lehmann interpreted that the waves was bounced off for some kind of boundary. In 1936, using this information, Lehmann published her paper entitled just “P’”. In this paper, Lehmann suggested that the center of the Earth is composed of two distinct parts: a solid inner core and a liquid outer core surrounding it, both separated by a discontinuity. It was not until 1970, that Lehmann’s hypothesis was confirmed, and the discontinuity was named after her.

Lehmann, who once referred to herself as the “the only Danish seismologist,” made a vast contribution to the understanding of the internal structure of Earth.  In 1971, she was awarded AGU’s William Bowie Medal, the highest honor of the American Geophysical Union.

She  died on February 21,  at the age of 104. In 1997 the American Geophysical Union established the Inge Lehmann Medal to recognize “outstanding contributions to the understanding of the structure, composition, and dynamics of the Earth’s mantle and core”.

In 1838, Christian Gottfried Ehrenberg, the famous  German naturalist and microscopist, described for first time fossil dinoflagellates from thin sections of Cretaceous flint (1). He observed tabulate dinoflagellates and some spinose bodies that he interpreted  as desmids placing them within the genus Xanthidium. Now we know  that ”Xanthidia” are in fact dinoflagellate cysts.

It was Evitt in 1961 the first to recognized that many of these tiny spinose specimens exhibited structures that appeared to link them to cysts produced by dinoflagellate algae during a non-motile stage in their life cycle. He was able to recognize patterns common to living dinoflagellates as well as features that are unique to the fossil forms (2). 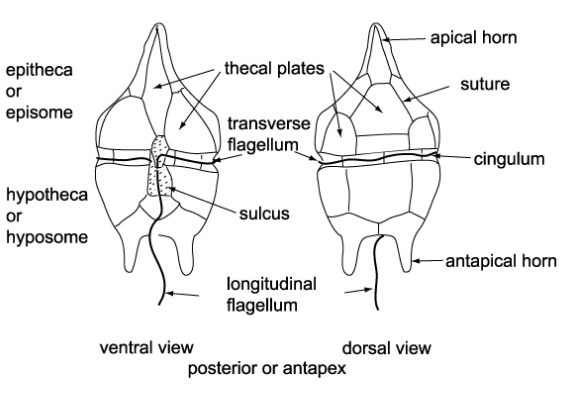 Features of a thecate dinoflagellate. Redrawn from Fensome et al. 1996. Image from UCL.

Dinoflagellates are unicellular protists that possess a nucleus lacking of histones, known as dinocarion, and at least one life-cycle stage involving cells with two characteristic flagella. Their populations are distributed based on the temperature, oxygenation, salinity and depth, therefore the dinoflagellate cysts are a tool to paleoenvironmental reconstruction  as they are sensitive indicators of such parameters.

Like many other protist, Dinoflagellates have a layer of vesicles near the margin of the cell. These vesicles contain cellulosic plates arranged in a certain pattern, which provides the primary basis for determining evolutionary relationships within the group (2). In 1907, Kofoid created a standardised decription of the tabulation pattern in dinoflagellates that is still use today and this tabulation pattern is the key to recognize dinocysts in the fossil record.

A phylogenetic analysis gives them a Precambrian origin, but despite that some resembles acritarcs the most accurate fossils belong to the Late Triassic. The Mesozoic radiation of the dinoflagellates is paralleled with the increase of sea level and the expansion of flooded continental shelf area (3). During the Jurassic they became more abundant and very fast-evolving, making them ideal subjects for palynostratigraphy.