At the beginning of the sixteenth century and throughout the seventeenth century a great debate about the true nature of fossils started in Italy and extended to Europe. There was two hypothesis in dispute: the first one postulated an inorganic origin for the fossils (directly formed within rocks) and the second, which contemplated an organic origin. The court doctor to the Grand Duke of Tuscany, Nicola Steno argued that the stones called Glossopetrae or “tongue stones” looked like shark teeth because they were shark teeth deposited a long time ago. In 1667, Henry Oldenburg, the secretary of the Royal Society included an abstract of ‘The head of a shark dissected’ (Canis Carchariae Dissectum Caput) by Nicolas Steno in one of the early issues of the Philosophical Transactions. Robert Hooke (1635-1703), Curator of Experiments of the Royal Society, expressed similar ideas two years before Steno. In ‘Micrographia’ (1665) he  argued that the micro-structure of petrified wood were identical to those seen in normal wood. He also described the ‘serpentine stones’ and concluded that these stones were not formed due any ‘plastic virtue’, but were due to shells of shellfish that became filled with mud or clay or petrifying water and had over time rotted away, leaving their impressions ‘both on the containing and contained substances’ (Kusukawa, 2013).

Between 1667 and 1700, Hooke delivered a series of at least 27 lectures or ‘Discourses’ to the Royal Society on the generic subject of ‘Earthquakes’, or earth-forming processes, published in his Posthumous works (1705), and accompanied by some of Hooke’s drawings that survived among the papers of Sir Hans Sloane. 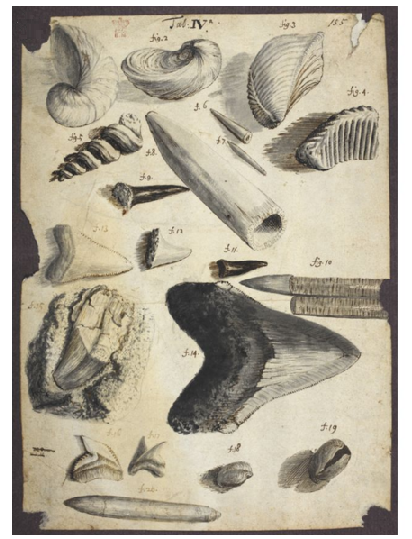 Hooke’s ‘wandering poles’ theory was the first dynamic explanation of continent formation in the history of science. ‘The Earth’s rotation, he proposed, caused a bulge and thus greater altitude at the equator versus a flattening at the poles. He maintained that over time, a change in the positions of the poles on the Earth surface due to a change in the moment of inertia would cause different areas of bulging and flattening with the creation of new land or sea areas’ (Drake, 2007).

By the time that he delivered his third series of ‘Discourses’ in 1687, Hooke had arrived to three remarkable conclusions. First, that fossils were the petrified remains of once living creatures (he called ‘medals of Nature’ and part of ‘Nature’s Grammar’, to be collected like coins and read like texts) and not just twists in the rock. Second, that there had been radical changes of sea level. Third, that hill-tops in England had once formed the beds of tropical oceans as indicated by the discovered of gigantic sea shells.

Hooke’s writings were intimately connected to his birthplace: the town of Freshwater near the western edge of the Isle of Wight. Throughout his Discourses he mentioned the cliffs around Freshwater Bay from which he collected fossils. Unfortunately, many of the fossils that he collected for the Royal Society, along with his portrait as Secretary of the Society, many papers and several scientific instruments and models designed by Hooke are lost, but Hooke’s ideas were transmitted by later writers, demonstrating the continuity of the development of geological thought. Arthur Percival Rossiter even nominated him in 1935 as ‘The First English Geologist’.

M. J. S. Rudwick, The meaning of fossils: episodes in the history of palaeontology(University of Chicago Press, 1985) 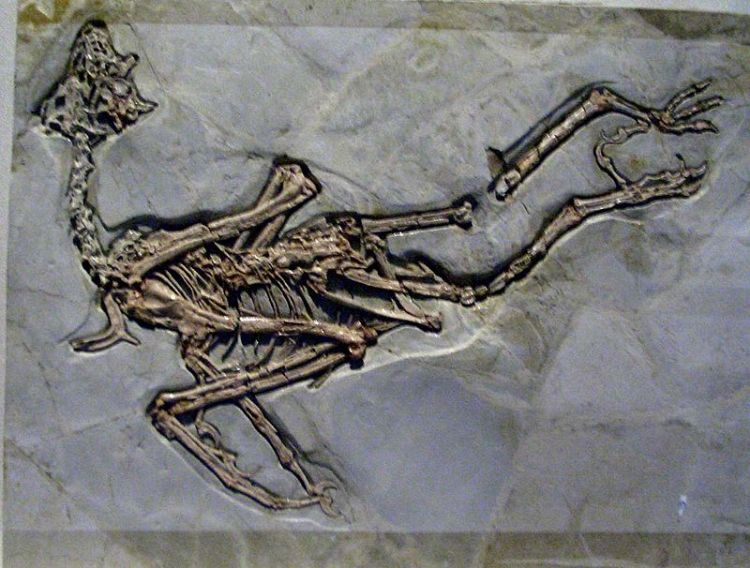 Birds originated from a theropod lineage more than 150 million years ago. By the Early Cretaceous, they diversified, evolving into a number of groups of varying anatomy and ecology. In recent years, several discovered fossils of theropods and early birds have filled the morphological, functional, and temporal gaps along the line to modern birds. Most of these fossils are from the Jehol Biota of northeastern China, dated between approximately 130.7 and 120 million years ago. The Jehol Biota is formed from two formations: the Yixian Formation, and the Jiufotang Formation, and contain the most diversified avifauna known to date. Among them was the long bony-tailed Jeholornis, only slightly more derived than Archaeopteryx, that lived with Sapeornis, Confuciusornis, and the earliest members of Enantiornithes and Ornithuromorpha. The last two groups, form the clade Ornithothoraces, characterized by a keeled sternum, elongate coracoid, narrow furcula, and reduced hand.

Ornithuromorphs, include Gansus, Patagopteryx, Yixianornis, and Apsaravis, which form a grade on the line to Ornithurae, a derived subgroup that includes modern birds and their closest fossil relatives (Brusatte et al., 2015).

The single best record of a Cretaceous neornithine is the partial skeleton of Vegavis from the latest Cretaceous (around 68–66 million years ago) of Antarctica.

Zhenyuanlong suni (photo by Junchang Lu) from the Jehol Biota.

Anatomical features like aspects of egg shape, ornamentation, microstructure, and porosity of living birds trace their origin to the maniraptoran theropods, such as oviraptorosaurs and troodontids. In addition, some preserving brooding postures, are known for four oviraptorosaurs, two troodontids, a dromaeosaur, and one basal bird providing clear evidence for parental care of eggs.

In birds, particularly their forebrains, are expanded relative to body size. Birds also exhibit the most advanced vertebrate visual system, with a highly developed ability to distinguish colors over a wide range of wavelengths.

Feathers were once considered to be unique avialan structures. The megalosaurus Sciurumimus, the compsognathus Sinosauropteryx, and a few other dinosaurs, document the appearance of primitive feathers. Zhenyuanlong suni, from the Yixian Formation, provides the first evidence of well-developed pennaceous feathers in a large, non-flying dromaeosaur. Evidence indicates that the earliest feathers evolved in non-flying dinosaurs, likely for display and/or thermoregulation, and later were co-opted into flight structures in the earliest birds (Brusatte et al., 2015). 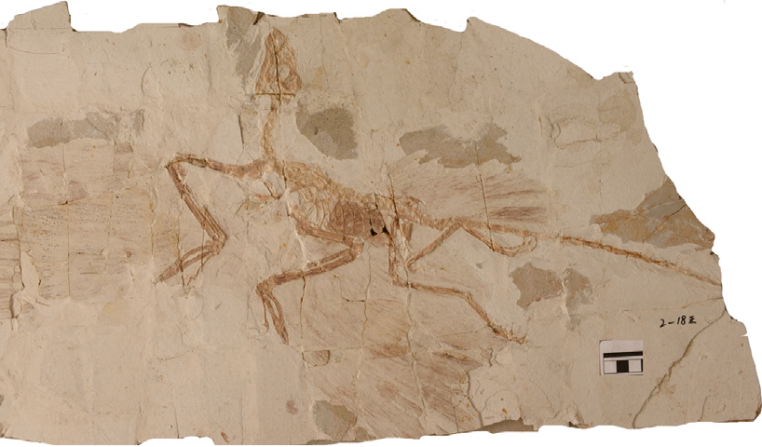 The evolution of flight involved a series of adaptive changes at the morphological and molecular levels, like the fusion and elimination of some bones and the pneumatization of the remaining ones. Archaeopteryx lacked a bony sternum and a compensatory specialized gastral basket for anchoring large flight muscles (O’Connor et al., 2015), while Jelohornis had several derived flight-related features of modern birds like fused sacral vertebrae, an elongated coracoid with a procoracoid process, a complex sternum, a narrow furcula, and curved scapula. In Enantiornithines, their robust pygostyle appears to have been unable to support the muscles that control the flight feathers on the tail in modern birds. The increased metabolism associated with homeothermy and powered flight requires an efficient gas exchange process during pulmonary ventilation. Recent anatomical and physiological studies show that alligators, and monitor lizards exhibit respiratory systems and unidirectional breathing akin to those of birds, which indicate that unidirectional breathing is a primitive characteristic of archosaurs or an even more inclusive group with the complex air-sac system evolving later within Archosauria.

The earliest diversification of extant birds (Neornithes) occurred during the Cretaceous period and after the mass extinction event at the Cretaceous-Paleogene (K-Pg) boundary, the Neoaves, the most diverse avian clade, suffered a rapid global expansion and radiation. A genome-scale molecular phylogeny indicates that nearly all modern ordinal lineages were formed within 15 million years after the extinction, suggesting a particularly rapid period of both genetic evolution and the formation of new species. Today, with more than 10500 living species, birds are the most species-rich class of tetrapod vertebrates.