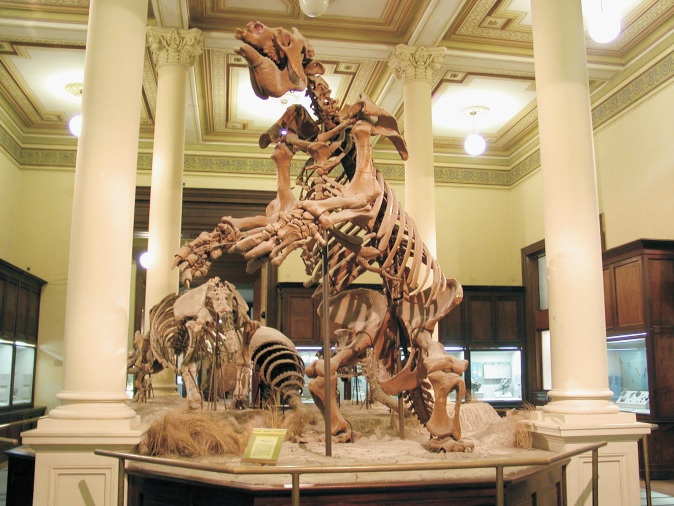 Before the Great American Biotic Interchange, about 3 million years ago, the largest mammals in South America were mainly endemic notoungulates, litopterns and xenarthrans. But, during the interchange, many other megamammals and large mammals arrived to South America. The late Pleistocene in this region is first characterized by a rapid cooling. During the Pleistocene-Holocene transition pollen sequences suggest a change to sub-humid climatic conditions. In addition to rapid climate change, the extinctions are seen as the result of habitat loss, reduced carrying capacity for herbivores, resource fragmentation or disturbances in the co-evolutionary equilibrium between plants, herbivores, and carnivores. The death event of the gomphothere population in Águas de Araxá (Brazil)  about 55,000 years ago, is probably an example of individuals that were suffering with the climate changes during the Late Pleistocene.

Paleontological and archaeological data indicate that extinctions seem more common after the human arrival and during the rapid climate change between 11.200 and 13.500 years. This pattern suggests that a synergy of human impacts and rapid climate change—analogous to what is happening today — may enhance extinction probability (Prado et al., 2015).

Mary Anning, ‘the greatest fossilist the world ever knew’, died of breast cancer on 9 March, 1847, at the age of 47. She was buried in the cemetery of St. Michaels. In the last decade of her life, Mary received  three accolades. The first was an annuity of £25, in return for her many contributions to the science of geology. The second was in 1846, when the geologists of the Geological Society of London organized a further subscription for her. The third accolade was her election, in July 1846, as the first Honorary Member of the new Dorset County Museum in Dorchester (Torrens, 1995). After her death, Henry de la Beche, Director of the Geological Survey and President of the Geological Society of London, wrote a very affectionate obituary published in the Quarterly Journal of the Geological Society on February 14, 1848, the only case of a non Fellow who received that honour. In his presidential address, de la Beche summarized Mary’s work: “I cannot close this notice of our losses by death without adverting to that of one, who though not placed among even the easier classes of society, but who had to earn her daily bread by her labour, yet contributed by her talents and untiring researches in no small degree to our knowledge of the great Enalio-saurians, and other forms of organic life entombed in the vicinity of Lyme Regis. MARY ANNING was the daughter of Richard Anning, a cabinet-maker of that town, and was born in May, 1799. … From her father, who appears to have been the first to collect and sell fossils in that neighbourhood, she learnt to search for and obtain them. Her future life was dedicated to this pursuit, by which she gained her livelihood; and there are those among us in this room who know well how to appreciate the skill she employed (from her knowledge of the various works as they appeared on the subject), in developing the remains of the many fine skeletons of Ichthyosauri and Plesiosauri, which without her care would never have presented to comparative anatomists in the uninjured form so desirable for their examinations…”

In February 1850 Mary was honoured by the unveiling of a new window in the parish church at Lyme, funded through another subscription among the Fellows of the Geological Society of London, with the following inscription: “This window is sacred to the memory of Mary Anning of this parish, who died 9 March AD 1847 and is erected by the vicar and some members of the Geological Society of London in commemoration of her usefulness in furthering the science of geology, as also of her benevolence of heart and integrity of life.”

In 1865, Charles Dickens wrote an article about Mary Anning’s life in his literary magazine “All the Year Round”, where emphasised the difficulties she had overcome: “Her history shows what humble people may do, if they have just purpose and courage enough, toward promoting the cause of science. The inscription under her memorial window commemorates “her usefulness in furthering the science of geology” (it was not a science when she began to discover, and so helped to make it one), “and also her benevolence of heart and integrity of life.” The carpenter’s daughter has won a name for herself, and has deserved to win it.”

Biotic change during and after the PETM. (From Speijer et al., 2012)

The Paleocene-Eocene Thermal Maximum (PETM; 55.8 million years ago), was a short-lived (~ 200,000 years) global warming event attributed to a rapid rise in the concentration of greenhouse gases in the atmosphere. It was suggested that this warming was initiated by the melting of methane hydrates on the seafloor and permafrost at high latitudes. During the PETM, around 5 billion tons of CO2 was released into the atmosphere per year, and temperatures increased by 5 – 9°C. This event was accompanied by other large-scale changes in the climate system, for example, the patterns of atmospheric circulation, vapor transport, precipitation, intermediate and deep-sea circulation and a rise in global sea level.

The rapid warming at the beginning of the Eocene has been inferred from the widespread distribution of dinoflagellate cysts. One taxon in particularly, Apectodinium, spans the entire carbon isotope excursion (CIE) of the PETM. The distribution of Apectodinium is linked to high temperatures and increased food availability.

The most disruptive impact during the PETM was likely the exceptional ocean acidification and the rise of the calcite dissolution depth, affecting marine organisms with calcareous shells (Zachos et al., 2005). When CO2 dissolves in seawater, it produce carbonic acid. The carbonic acid dissociates in the water releasing hydrogen ions and bicarbonate. The formation of bicarbonate then removes carbonate ions from the water, making them less available for use by organisms.

Nannofossil abundance changes during the PETM. (From Kump, 2009.)

The PETM onset is also marked by the largest deep-sea mass extinction among calcareous benthic foraminifera (including calcareous agglutinated taxa) in the last 93 million years. Similarly, planktonic foraminifera communities at low and high latitudes show reductions in diversity, while larger foraminifera are the most common constituents of late Paleocene–early Eocene carbonate platforms.

The response of most marine invertebrates (mollusks, echinoderms, brachiopods) to paleoclimatic change during the PETM is poorly documented.

The PETM is also associated with dramatic changes among the calcareous plankton,characterized by the appearance of transient nanoplankton taxa of heavily calcified forms of Rhomboaster spp., Discoaster araneus, and D. anartios as well as Coccolithus bownii, a more delicate form.

The combination of global warming and the release of large amounts of carbon to the ocean-atmosphere system during the PETM has encouraged analogies to be drawn with modern anthropogenic climate change. The current rate of the anthropogenic carbon input  is probably greater than during the PETM, causing a more severe decline in ocean pH and saturation state. Also the biotic consequences of the PETM were fairly minor, while the current rate of species extinction is already 100–1000 times higher than would be considered natural. This underlines the urgency for immediate action on global carbon emission reductions.

Comparison of the effects of anthropogenic emissions (total of 5000 Pg C over 500 years) and PETM carbon release (3000 Pg C over 6 kyr) on the surface ocean saturation state of calcite. From Zeebe, 2013

Raffi, I. and de Bernardi, B.: Response of calcareous nannofossils to the Paleocene-Eocene Thermal Maximum: observations on composition, preservation and calcification in sediments from ODP Site 1263 (Walvis Ridge – SW Atlantic), Mar. Micropaleontol., 69, 119–138, 2008.