In the last decades, the study of Gondwanan non-avian theropods has been highly prolific, showing that the group reached a great taxonomic and morphological diversity comparable to that of Laurasia. The Mesozoic Gondwanan neotheropod record includes: coelophysoids, basal averostrans, ceratosaurids, abelisauroids, megalosauroids, carcharodontosaurids, megaraptorans, basal coelurosaurs, compsognathids, alvarezsauroids, unenlagiids, and basal avialans, as well as putative tyrannosauroids, ornithomimosaur-like forms, and troodontid. Therefore, the Gondwanan fossil record has been crucial to understand the evolution and global biogeography of dinosaurs during the Mesozoic.

The first probable theropod remains from Gondwana were discovered in Colombia by Carl Degenhard, a German engineer, in 1839. At that time the word “dinosaur” did not even exist yet. Although Degenhard identified them as bird footprints, his brief description suggests that they were tracks of bipedal dinosaurs. But it was not until 1896 that the first Gondwanan theropod was named by the French palaeontologist Charles Depéret as “Megalosaurus” crenatissimus from the Upper Cretaceous of Madagascar. Several theropod remains were described from India, Africa, and South America during the 19th century. These early fragmentary discoveries lead the authors of the late XIX and early XX centuries to interpret them as belonging the same lineages present in Europe and North America.

In 1901, A. Smith Woodward described Genyodectes, based on fragmentary skull bones, including portions of both maxillas, premaxillae,  parts of the supradentaries, and some teeth, discovered by Santiago Roth in Chubut, at the end of the 1880s. Genyodectes remained as the most completely known  theropod from South American until the 1970s. In 2004, O. Rauhut concluded that Genyodectes is more closely related to Ceratosaurus than the more derived abelisaurs.

Between 1915 and 1933, the most relevant Gondwanan theropod discoveries were produced by the work of the German palaeontologists Frederich von Huene, Ernst Stromer, and Werner Janensch, including for the first time the publication of very informative partial skeletons, such as those of Spinosaurus aegyptiacus and Elaphrosaurus bambergi (Stromer, 1915; Janensch, 1920). Despite its low fossil record, Spinosaurus is one of the most famous dinosaur of all time. This gigantic theropod possessed highly derived cranial and vertebral features sufficiently distinct for it to be designated as the nominal genus of the clade Spinosauridae. But during and after the Second World War the influence of the German palaeontology in the research of Gondwanan theropods abruptly declined.

Skull and neck of Carnotaurus sastrei

By the 1960s, the Argentine biologist Osvaldo Reig, together with Rodolfo Casamiquela and José Bonaparte, began to explore the Mesozoic rocks of Argentina looking for fossil tetrapods. In 1985, Bonaparte published a note presenting Carnotaurus sastrei as a new genus and species and briefly describing the skull and lower jaw. It was collected in the lower section of La Colonia Formation, Chubut Province. The discoveries of Bonaparte and his collaborators resulted in the recognition of the Patagonian theropod record as the most relevant and informative among Gondwanan continents. Some of the theropod species discovered in Patagonia are known on the basis of skulls and fairly complete skeletons offering insights into the anatomy and phylogeny of abelisaurids, carcharodontosaurids, and maniraptorans.

In the 19th century, the famous Victorian anatomist Richard Owen diagnosed Dinosauria using three taxa: Megalosaurus, Iguanodon and Hylaeosaurus, on the basis of three main features: large size and terrestrial habits, upright posture and sacrum with five vertebrae (because the specimens were from all Late Jurassic and Cretaceous, he didn’t know that the first dinosaurs had three or fewer sacrals). These characteristics were more mammalian than reptilian. But new fossil findings from Europe and particularly North America forced to a new interpretation about those gigantic animals.

In 1887, Harry Govier Seeley summarised the works of Cope, Huxley and Marsh who already subdivided the group Dinosauria into various orders and suborders. However, he was the first to subdivide dinosaurs into Saurischians and the Ornithischians, based on the nature of their pelvic bones and joints. He wrote: “The characters on which these animals should be classified are, I submit, those which pervade the several parts of the skeleton, and exhibit some diversity among the associated animal types. The pelvis is perhaps more typical of these animals than any other part of the skeleton and should be a prime element in classification. The presence or absence of the pneumatic condition of the vertebrae is an important structural difference…” Based on these features, Seeley denied the monophyly of dinosaurs. 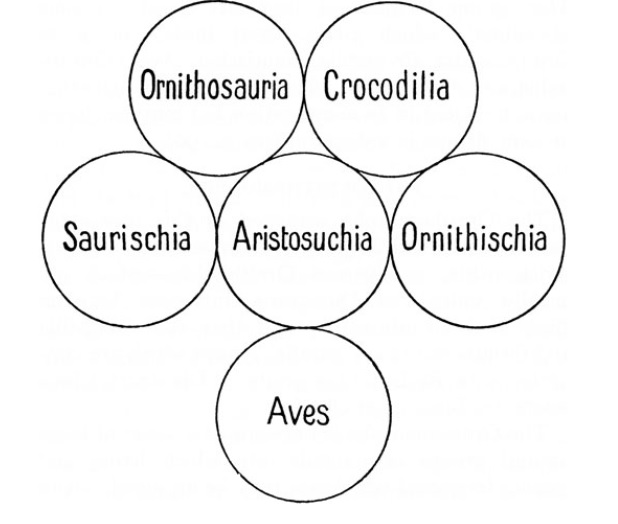 Seeley’s (1901) diagram of the relationships of Archosauria. From Padian 2013

At the mid 20th century, the consensual views about Dinosauria were: first, the group was not monophyletic; second almost no Triassic ornithischians were recognised, so they were considered derived morphologically, which leads to the third point, the problem of the ‘‘origin of dinosaurs’’ usually was reduced to the problem of the ‘‘origin of Saurischia,’’ because theropods were regarded as the most primitive saurischians. A great influence on the views about the dinosaur origins was Alan Charig. He was Curator of Amphibians, Reptiles and Birds at the British Museum (Natural History), now the Natural History Museum, in London for almost thirty years. Charig thought that the first dinosaurs were quadrupedal, not bipedal. He based this on the kinds of animals that he and his colleagues found in the early Triassic localities of eastern and South Africa. He thought that forms such as ‘‘Mandasuchus’’ were related to dinosaurs, but that they had a posture intermediate between a sprawling and upright gait that he called ‘‘semi-improved” or ‘‘semi-erect’’. 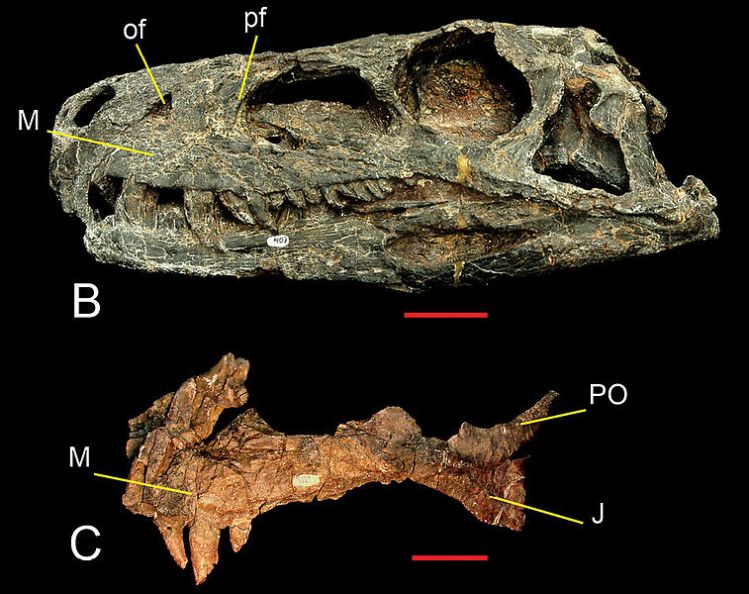 The discovery of Lagosuchus and Lagerpeton from the Middle Triassic of Argentina induced a change in the views of dinosaurs origins. Also from South America came Herrerasaurus from the Ischigualasto Formation, the basal sauropodomorphs Saturnalia, Panphagia, Chromogisaurus, and the theropods Guibasaurus and Zupaysaurus, but no ornithischians except a possible heterodontosaurid jaw fragment from Patagonia. The 70s marked the beginning of a profound shift in thinking on nearly all aspects of dinosaur evolution, biology and ecology. Robert Bakker and Peter Galton, based on John Ostrom’s vision about Dinosauria, proposed, for perhaps the first time since 1842, that Dinosauria was indeed a monophyletic group and that it should be separated (along with birds) from other reptiles as a distinct ‘‘Class”. In 1986, the palaeontologist Jacques Gauthier showed that dinosaurs form a single group, which collectively has specific diagnostic traits that set them apart from all other animals.

Phylogenetic analyses of early dinosaurs have  supported the traditional scheme. But back in March of this year, a paper, authored by Matthew Baron, David Norman and Paul Barrett, challenged this paradigm with a new phylogenetic analysis that places theropods and ornithischians together in a group called Ornithoscelida. The team analysed a wide range of dinosaurs and dinosauromorphs (74 taxa were scored for 457 characters), and they arrived at a dinosaur evolutionary tree containing one main branch that subdivides into the groupings of Ornithischia and Theropoda, and a second main branch that contains the Sauropoda and Herrerasauridae (usually positioned as either basal theropods or basal Saurischia, or outside Dinosauria but close to it). The term Ornithoscelida was coined in 1870 by Thomas Huxley for a group containing the historically recognized groupings of Compsognatha, Iguanodontidae, Megalosauridae and Scelidosauridae. The synapomorphies that support the formation of the clade Ornithoscelida includes: an anterior premaxillary foramen located on the inside of the narial fossa; a sharp longitudinal ridge on the lateral surface of the maxilla; short and deep paroccipital processes; a post-temporal foramen enclosed within the paroccipital process; a straight femur, without a sigmoidal profile; absence of a medioventral acetabular flange; a straight femur, without a sigmoidal profile; and fusion of the distal tarsals to the proximal ends of the metatarsals.

Of course, those results have great implications for the very origin of dinosaurs. Ornithischia don’t begin to diversify substantially until the Early Jurassic. By contrast, the other dinosaurian groups already existed by at least the early Late Triassic. If the impoverished Triassic record of ornithischians reflects a true absence, ornithischians might have evolved from theropods in the Late Triassic (Padian, 2017). The study also suggest that dinosaurs might have originated in the Northern Hemisphere, because most of their basal members, as well as their close relatives, are found there. Furthermore, their analyses places the origin of dinosaurs at the boundary of the Olenekian and Anisian stages (around 247 Ma), slightly earlier than has been suggested previously.

More recently, an international team of early dinosaur evolution specialists, led by Max Langer, highlighted that the lack of some important taxa (for example, the early thyreophoran Scutellosaurus, the possible theropod Daemonosaurus, and the newly described Ixalerpeton and Buriolestes) may have a substantial effect on character optimizations near the base of the dinosaur tree, and thus on the interrelationships of early dinosaurs. The study did not find strong evidence to discard the traditional Ornithischia–Saurischia division. But they reintroduced a third possibility that was articulated in the 1980s but rarely discussed since: that sauropodomorphs and ornithischians may form their own herbivorous group, separate from the ancestrally meat-eating theropods. The Phytodinosauria hypothesis was coined by Robert T. Bakker in his book The Dinosaur Heresies: “Therefore all the plant-eating dinosaurs of every sort really constitute one, single natural group branching out from one ancestor, a primitive anchisaurlike dinosaur. And a new name is required for this grand family of vegetarians. So I hereby christen them the Phytodinosauria, the “plant dinosaurs”‘

Padian K. The problem of dinosaur origins: integrating three approaches to the rise of Dinosauria. Earth and Environmental Science Transactions of the Royal Society of Edinburgh, Available on CJO 2013 doi:10.1017/S1755691013000431 (2013).

Huxley, T. H. On the classification of the Dinosauria, with observations on the Dinosauria of the Trias. Quarterly Journal of the Geological Society, London 26, 32-51. (1870).

Almost thirty years ago, the discovery of anomalously high abundance of iridium and other platinum group elements in the Cretaceous/Palaeogene (K-Pg) boundary led to the hypothesis that an asteroid collided with the Earth and caused one of the most devastating events in the history of life. The impact created the 180-kilometre wide Chicxulub crater causing widespread tsunamis along the coastal zones of the surrounding oceans and released an estimated energy equivalent of 100 teratons of TNT and produced high concentrations of dust, soot, and sulfate aerosols in the atmosphere.

Three-quarters of the plant and animal species on Earth disappeared, including non-avian dinosaurs, other vertebrates, marine reptiles and invertebrates, planktonic foraminifera and ammonites. Marine ecosystems lost about half of their species while freshwater environments shows low extinction rates, about 10% to 22% of genera.

A time-lapse animation showing severe cooling due to sulfate aerosols from the Chicxulub asteroid impact 66 million years ago (Credit: PKI)

The decrease of sunlight caused a drastic short-term global reduction in temperature (15 °C on a global average, 11 °C over the ocean, and 28 °C over land). While the surface and lower atmosphere cooled, the tropopause became much warmer, eliminate the tropical cold trap and allow water vapor mixing ratios to increase to well over 1,000 ppmv in the stratosphere. Those events accelerated the destruction of the ozone layer. During this period, UV light was able to reach the surface at highly elevated and harmful levels. This phenomenon is called “impact winter”.

Recent drilling of the peak ring of the Chicxulub impact crater has been used to create 3-D numerical simulations of the crater formation. It was estimate that the angle of impact at Chicxulub was ~60° with a downrange direction to the southwest. The new study indicates that the impact may have released around three times as much sulfur and much less carbon dioxide compared with previous calculations, suggesting that surface temperatures were likely to have been signiﬁcantly reduced for several years and ocean temperatures affected for hundreds of years after the Chicxulub impact.