From Siberia to Alaska, mammoths were widespread in the northern hemisphere during the Last Ice Age and their remains inspired all types of legends. Their lineage arose in Africa during the late Miocene, and ﬁrst appeared in Europe almost three million years ago. Eventually they dispersed to North America via Beringia, during the Middle Pliocene to Early Pleistocene. Their evolution during the Pleistocene is usually presented as a succession of chronologically overlapping species. M. meridionalis (southern mammoths) arose about 2–1.7 million years ago and was replaced by M. trogontherii (steppe mammoths), which evolved in eastern Asia around 2–1.5 million years ago. Although the relationship among these taxa are uncertain, the prevailing view is that M. columbi (Columbian mammoths) must have arisen from M. trogontheri, which must also be the ancestor of the earliest known examples of M. primigenius (woolly mammoths). A new study by an international team of paleontologists and geneticists offers a glimpse into the origin and evolution of woolly and Columbian mammoth. They used genomic data more than one million years old. So far, the oldest genomic data recovered were from a horse specimen dated to 780–560 thousand years ago.

The researchers recovered genome data from three Early-Middle Pleistocene mammoth molars preserved in Siberian permafrost. The samples were recovered by the late Andrei Sher (Russian Academy of Sciences, Moscow) from the well-documented Olyorian Suite of northeastern Siberia in the 1970s. The first specimen (referred to as ‘Krestovka‘) is morphologically similar to the steppe mammoth (originally defined from the Middle Pleistocene of Europe). It was discovered in 1973 in a cliff exposure along the right side of the Krestovka River. The second specimen (referred to as ‘Adycha’) was recovered in 1976 from a gravel bar in the Adycha River and shows M. trogontherii-like morphology. The third specimen (referred to as ‘Chukochya’) was found in 1971 in a riverbank on the right side of the Bolshaya Chukochya River, and has a morphology consistent with an early form of woolly mammot.

Analysis of the DNA suggested that two evolutionary lineages of mammoths inhabited eastern Siberia during the later stages of the Early Pleistocene. One of these lineages is represented by the Krestovka specimen (dated 1.65 Ma), and the second lineage comprises the Adycha specimen (dated 1.3 Ma) along with all Middle and Late Pleistocene woolly mammoths. The results also indicate that the Columbian mammoth is a product of admixture between woolly mammoths and a previously unrecognized ancient mammoth lineage, represented by the Krestovka specimen. This hybridization event took place around 420,000 years ago. The new findings indicate that before the hybridization event North American mammoths belonged to the Krestovka lineage. Previously, a DNA study of the complete mitochondrial genome of Columbian mammoths suggested that interbreeding between late Pleistocene taxa could serve as an indicator of major ecological events, including those surrounding the megafaunal extinctions.

The iconic woolly mammoth evolved into a cold-tolerant, open-habitat specialist through a series of adaptive changes like hair growth, and white and brown fat deposits. The study found that the genes related to these features were present in both the Adycha (87%) and Chukochya (89%) genomes. The findings are suported by the tooth shape of all these northern species that is adapted to grazing   in a cold, open environment. 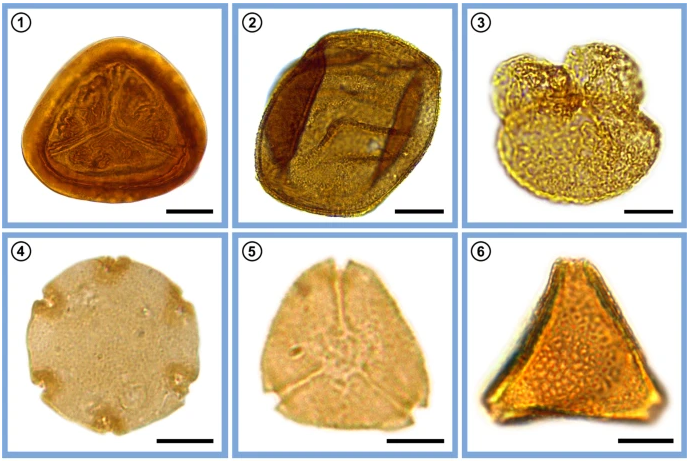 Spore-pollen species from the Eocene of southern South America. From Fernandez et al., 2021

The geological records show that large and rapid global warming events occurred repeatedly during the course of Earth history. Ecological models can predict how biodiversity is affected by those events, but only the fossil record provides empirical evidence about the impact of rising temperatures and atmospheric CO2 on species diversity.

The Middle Eocene Climatic Optimum (MECO, ~40 Ma) was a transient period of global warming that interrupted the general cooling trend initiated at the end of the early Eocene climate optimum (EECO, ~49 Ma). The MECO is related to major oceanographic and climatic changes in the Neo-Tethys and also in other oceanic basins, and lasted about 500–600 Kyr. The MECO altered the pelagic ecosystem with repercussions on the food web structure. The lack of nutrients in the surface waters led to a significant decrease in planktonic foraminiferal accumulation rates, while autotroph nannoplankton accumulation rates remained stable.

Relative frequency of the most common plant groups across the MECO and Late Eocene. From Fernández et al., 2021

The MECO also influenced terrestrial biotas. A new study quantify the response of the floras of southern Patagonia to this warming event. The samples were collected from the Río Turbio Formation in southern Patagonia. The terrestrial palynological assemblage revealed a clear inverse relationship between the abundance of ferns and angiosperms. At the beginning of the MECO, ferns highly increase in abundance (with Cyatheaceae, Dicksoniaceae, and Osmundaceae as the most frequent families), while the abundance of angiosperms decreases dramatically. Podocarpaceae also increases from ~5 % to ~20%. At the core of MECO, ferns drop to a minimum, and angiosperms become dominant. Finally, at the end of the MECO ferns rise again to maximum values and angiosperms decrease.

Palynological analysis also revealed that floras in southern Patagonia were in average ~40% more diverse during the MECO than pre-MECO and post-MECO intervals. The penetration of neotropical migrant species to the highest latitudes along with the persistence of southern Gondwanan natives may have triggered the gradual increasing diversity that can be observed across the MECO.