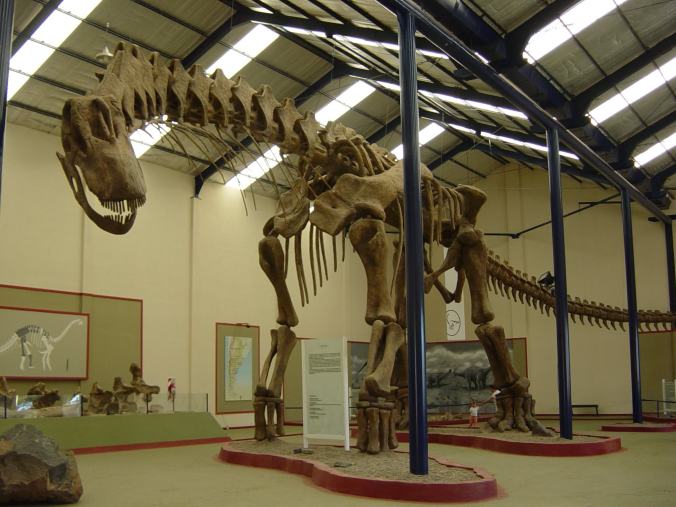 Titanosaurus were a diverse group of sauropod dinosaurs represented by more than 30 genera, which included all descendants of the more recent common ancestor of Andesaurus  and Saltasaurus (Wilson and Upchurch, 2003). They were important terrestrial herbivores during the Jurassic and the Cretaceous periods. The group exhibits a worldwide distribution and  some of them, were the largest animals to ever walk the Earth: Argentinosaurus, Futalognkosaurus, and Puertasaurus surpassed lengths of 30m and masses of 70 tons.

The discoveries in Patagonia of embryos, eggs (Chiappe et al., 1998, 2001; Salgado et al., 2005; García et al., 2010) and exceptionally articulated specimens show the importance of the South American record for understanding the phylogeny and paleobiology of titanosaurs. 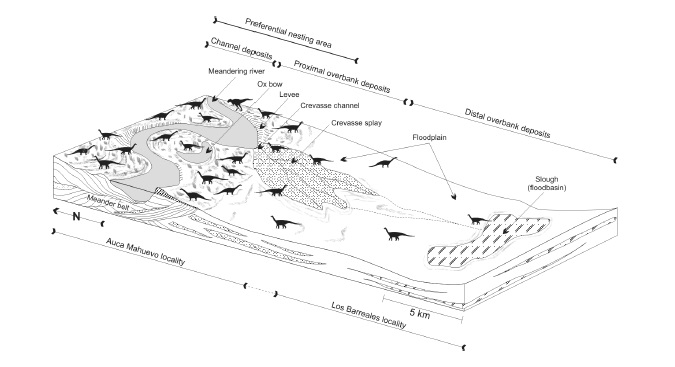 Paleoenvironmental reconstruction of the egg-bearing lower section of the Anacleto Formation at Auca Mahuevo and Los Barreales localities. From Garrido 2010

The hundreds of eggs containing embryos found in the outcrops of the Anacleto Formation at Auca Mahuevo and Los Barreales corroborated the hypothesis that sauropods were oviparous. The eggs were relatively small (10–25 cm of diameter) and were found  in excavated nests. The embryos from Auca Mahuevo present an ‘egg-tooth’-like structure which is more frequent in altricial birds (García, 2007a, 2008). If we assume that titanosaurs followed a sequence of ontogenetic stages similar to modern birds, these embryos would correspond with the stage 36-37, within the 42 prenatal stages established for birds.

The titanosaur embryos discovered in Auca Mahuevo are exclusively represented by cranial material. Comparing the skull of adults titanosaurs with the embryos from Auca Mahuevo, it seem evident that the Patagonian dinosaurs experienced a deep ontogenetic modification in this part of the skeleton.

The rostral portion of the embryonic skull never surpasses 50% of the total skull length while adult sauropods possess a relatively elongated skull. The premaxillae of  the embryos have extremely short nasal processes contrary to those of adult titanosaurs. It’s possible that the remodeling of the premaxillae in the ontogeny has implicated the elongation of the nasal process as well, which in turn would be related to the ontogenetic retraction of the external nares (García et al, 2014). The type of teeth is basically similar in the embryos and those of the few known adult titanosaur skulls, which may be indicative of the same basic diet.

The brain morphology shows a tendency to the reduction of the midbrain and the olfactory tract and bulbs. Titanosaurs also exhibit a reduction of the anterior semicircular canal of the inner ear and a robustness of the labyrinth in comparison with other sauropods.

Shoulder and pelvic girdle architecture of titanosaurs suggests a broader posture than that other sauropods, which is related to a shift in the specific muscular attachments that would counteract the wide posture of the limbs (García et al, 2014).

The ichnological record offers valuable information about different strategies of titanosaur locomotion and behavior. Most of the trackways are parallel and show the same direction of travel which is indication that titanosaurs moved in social groups. 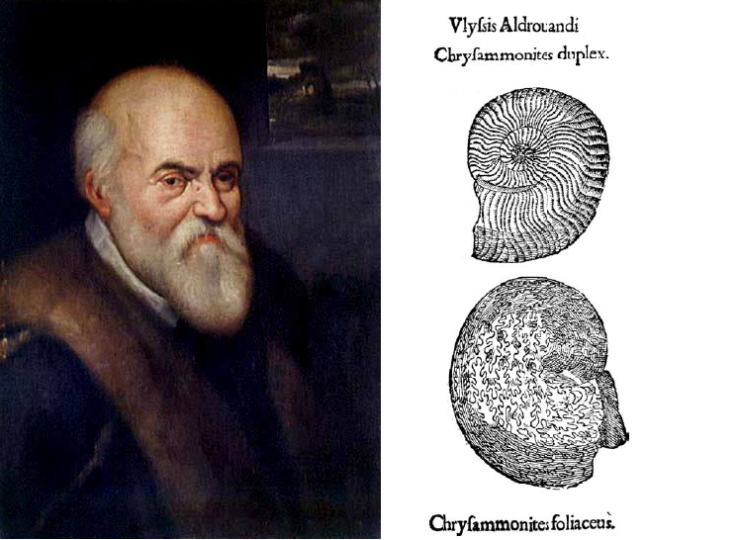 Ammonites figured by Aldrovandi on his Musaeum Metallicum.

Since antiquity, ammonites has been associated with myths, legends, religion and even necromancy. You can find reference to these fossils in the works of Emilio Salgari, Sir Walter Scott, Friedrich Schiller and Johann Wolfgang von Goethe.

From the sixteenth to the late eighteenth centuries, the study of ammonites in Italy was crucial in the debate about the real nature of fossil remains. Leonardo describes the ammonites of the Veronese mountains in the code Hammer (formerly Codex Leicester), folio 9, where he identified these fossils as lithified remains of organisms.

Ulisse Aldrovandi describes several specimens of ammonites in his Musaeum Metallicum.  Aldrovandi supported the idea of the inorganic origin of fossils, although he often compared them with existing animals. He recognized some resemblance between ammonites and snakes so he used the term ‘Ophiomorphites’ (or snake-shaped stone). 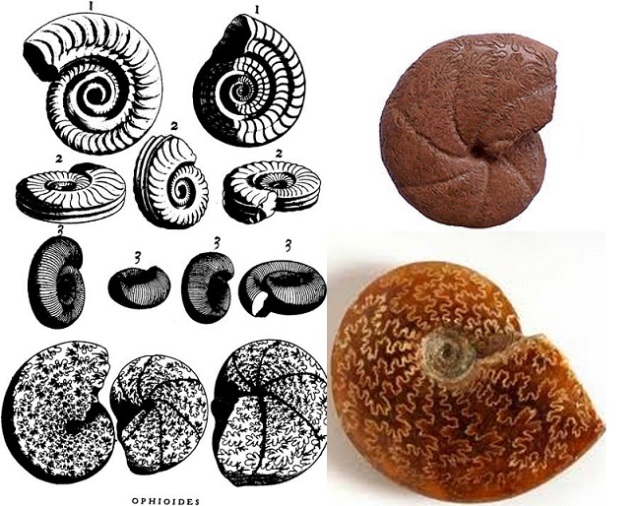 Ammonites illustration of the Metallotheca Vaticana of Michele Mercati. Two examples of the ammonites described: Calliphylloceras and Phylloceras

In 1574, Michele Mercati organises the famous Metallotheca Vaticana, where describes several ammonites. But he fully embraces the inorganic interpretation of fossils, a real setback with respect to the pioneering hypothesis previously formulated by Leonardo da Vinci. Mercati treats the fossils with he generic term ‘Lapides idiomorphoi’ (stones equipped with proper shape).

In the seventeenth century, the Italian painter Agostino Scilla  compiled an enormous body of evidence, well reasoned and convincing, in favour of the organic nature of fossils found on hills and mountains (Romano, 2014). . However, there is no mention of ammonites is his work. Paolo Silvio Boccone (1633–1704) a Sicilian naturalist and botanist, also supported of the organic nature of fossils. In ‘Recherches et Observations Naturelles’ (1674), he wrote that ammonites – at that time called ‘Corne d’Ammone’ or ‘Corne de Belier’–  represent models (internal) while the original shells of organisms must have  been ‘calcined’ or ‘pulverised’. 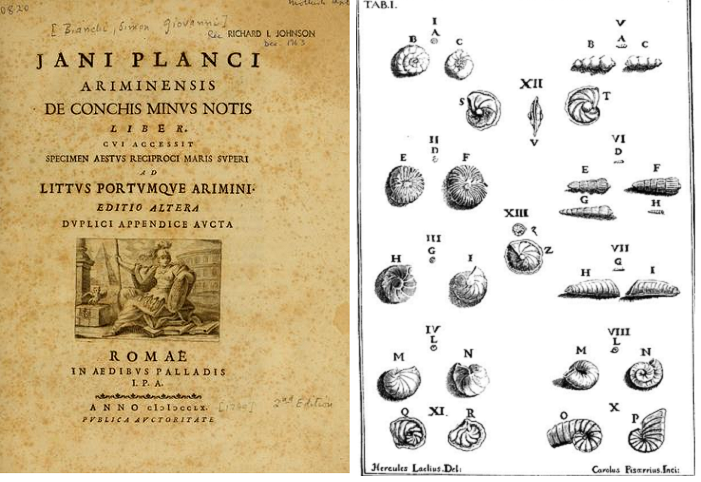 Cover of De conchis minus notis and foraminifera of Rimini’s seaside figured by Bianchi (1739, Table I) and attributed by the author to microscopic specimens of ‘Cornu Ammonis’.

In the first half of the eighteenth century, Bartolomeo Beccari began to study tiny shells that could only be observed under the microscope and classified these organisms as microscopic ‘Corni di Ammone’, continuing with the enduring confusion between cephalopods and foraminifera that started in 1565 when Conrad Gesner described the nummulites collected in the surroundings of Paris. Also Giovanni Bianchi (known by the pseudonym Jaco Planco) in his work De conchis minus notis (1739) describes numerous microforaminifera that are found in abundance on the shoreline of Rimini and assigns them the name ‘Corni di Ammone’. This confusion between cephalopods and foraminifera persisted until the French naturalist Alcide d’Orbigny, after 6 years of analysis, arrived to the correct conclusion that these microscopic organisms are a distinct order to which he gave the name of Foraminifera.