Dinosaurs likely originated in the Early to Middle Triassic. The Manda beds of Tanzania yielded the remains of the possible oldest dinosaur, Nyasasaurus parringtoni, and Asilisaurus, a silesaurid (the immediate sister-group to Dinosauria). However the oldest well-dated identified dinosaurs are from the late Carnian of the lower Ischigualasto Formation in northwestern Argentina, dated from 231.4 Ma to 225.9 Ma. The presence of dinosaurs, such as Panphagia, Eoraptor, and Herrerasaurus support the argument that Dinosauria originated during the Ladinian or earlier and that they were already well diversified in the early Carnian. Similarly, the Santa Maria and Caturrita formations in southern Brazil preserve basal dinosauromorphs, basal saurischians, and early sauropodomorphs. In North America, the oldest dated occurrences of vertebrate assemblages with dinosaurs are from the Chinle Formation. Two further early dinosaur-bearing formations, are the lower (and upper) Maleri Formation of India and the Pebbly Arkose Formation of Zimbabwe. These skeletal records of early dinosaurs document a time when they were not numerically abundant, and they were still of modest body size (Eoraptor had a slender body with an estimated weight of about 10 kilograms).

Trace fossil evidence suggests that the first dinosaur dispersal in the eastern Pangaea is synchronous with an important climate-change event named the “Carnian Pluvial Episode” (CPE) or “Wet Intermezzo”, dated to 234–232 Ma.

The Late Triassic is marked by a return to the hothouse condition of the Early Triassic, with two greenhouse crisis that may also have played a role in mass extinctions. Isotopic  records suggest  a global carbon cycle perturbation during the Carnian that was coincident with complex environmental changes and biotic turnover.

The CPE is often described as a shift from arid to more humid conditions (global warming, ocean acidification, mega-monsoonal conditions, and a generalised increase in rainfall). In the marine sedimentary basins of the Tethys realm, an abrupt change of carbonate factories and the establishment of anoxic conditions mark the beginning of the climate change. The CPE also marks the first massive appearance of calcareous nannoplankton, while groups, like bryozoans and crinoids, show a sharp decline during this event.

Palynological association from the Heiligkreuz Formation provide information on palynostratigraphy and palaeoclimate during the last part of the Carnian Pluvial Event (CPE). From Roghi et al., 2014

On land, palaeobotanical evidence shows a shift of floral associations of towards elements more adapted to humid conditions (the palynological record across the CPE suggest at least 3–4 discrete humid pulses). Several families and orders make their first appearance during the Carnian: bennettitaleans, modern ferns, and conifer families (Pinaceae, Araucariaceae, Cheirolepidaceae). The oldest biological inclusions found preserved in amber also come from the Carnian; and key herbivorous groups such as dicynodonts and rhynchosaurs, which had represented 50% or more of faunas, disappeared, and their places were taken by dinosaurs.

Despite the global significance of the CPE,  the trigger of the environmental change  is still disputed. Volcanic emissions from the Wrangellia igneous province and the dissociation of methane clathrates could be linked to the CPE. It seems that the combination of that events  would be the most likely explanation for the substantial shift of the C isotope excursion observed at the CPE. 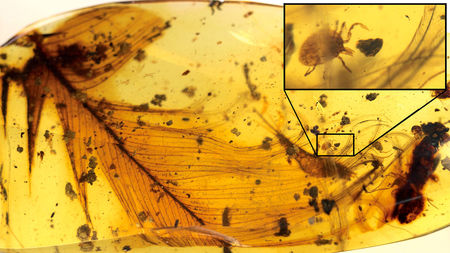 A tick entangled in a dinosaur feather (From Peñalver et al., 2017)

We all know the story. In the early 80’s, John Hammond, a shady entrepreneur, created the ultimate thematic park by cloning dinosaurs from preserved DNA in mosquitoes entombed in amber. The idea, as Michael Crichton acknowledged, was not new.

In 1982, entomologist George Poinar and electron microscopist Roberta Hess at University of California,  found exceptional evidence for the organic preservation of a 40-million-year-old fly in Baltic amber. They saw intact cell organelles, such as nuclei, and mitochondria, and wondered whether these results were replicable. After a letter from Poinar to a colleague, they received, a week later,  a 70–80 million-year-old wasp in Canadian amber. The wasp also revealed evidence of cellular structure. The realization that amber was a special source of cellular preservation caused them to wonder if it could be a source of molecular preservation, too.

Quagga mare at London Zoo, 1870, the only specimen photographed alive

Poinar and Hess joined forces with Allan Wilson, Professor of Biochemistry at Berkeley, and Russell Higuchi, a molecular biologist and postdoctoral researcher in Wilson’s lab. A year later, they embarked on the first experiment to test ideas about the preservation and extraction of DNA from insects in ancient amber. Poinar selected eight specimens that would potentially offer optimal preservation of DNA. In two of the eight insects were signs of DNA, but no hybridization experiments were done to determine whether the results were due to human contamination.

Soon, Wilson and Higuchi turned their attention to the quagga, a subspecies of plains zebra that went extinct in 1883. The study, lead by Russell Higuchi, used two short mitochondrial DNA sequences from the muscle and connective tissue from a 140 year-old quagga from the Natural History Museum in Mainz, Germany, and confirmed that the quagga was more closely related to zebras than to horses.
The survival of DNA in quagga tissue and in an Egyptian mummy created waves among the scientific community, and in the autumn of 1984, Wilson and his lab submitted to the National Science Foundation (NSF), the first official research proposal to search for DNA in ancient and extinct organisms. They wrote: “This is the first proposal to study the possible utility of DNA to paleontology. If clonable DNA is present in many fossil bones and teeth and in insects included in amber, a new field, molecular paleontology, can arise.”

Patagonia has yielded the most comprehensive fossil record of Cretaceous theropods from Gondwana, including Megaraptora, a clade of medium-sized and highly pneumatized theropods represented by Fukuiraptor, Aerosteon, Australovenator, Megaraptor, Murusraptor, and Orkoraptor, and characterized by the formidable development of their manual claws on digits I and II and the transversely compressed and ventrally sharp ungual of the first manual digit. The enigmatic nature of this group has been a matter of discussion since the description of the first megaraptoran, Megaraptor namunhaiquii in 1990s .

The phylogenetic position of Megaraptora is still controversial. But despite the lack of consensus, megaraptorans themselves remain a well-supported, monophyletic clade. Now, a new megaraptoran theropod dinosaur from the Upper Cretaceous of the Neuquén Group, sheds light on on these enigmatic predators.

Tratayenia rosalesi is the first megaraptoran theropod described from the Santonian Bajo de la Carpa Formation of the Neuquén Group. The genus name is for Tratayén, the locality where the holotype was collected. The specific name honors Diego Rosales, who discovered the specimen in 2006.
The holotypic specimen (MUCPv 1162) consists of a well-preserved, mostly articulated series of dorsal and sacral vertebrae, two partial dorsal ribs, the right ilium, pubis and ischium fragments. Tratayenia is the first megaraptoran that unequivocally preserves the complete sequence of sacral vertebrae. The dorsal and sacral centra and neural arches of Tratayenia are unfused, suggesting that the specimen was a subadult at the time of death.

The elevated pneumaticity and morphological resemblance of the axial and pelvic elements of Tratayenia with Aerosteon riocoloradensis and Murusraptor barrosaensis suggests a particularly close relationships between these three taxa. Tratayenia is also the largest carnivorous taxon known from Bajo de la Carpa Formation, reinforcing the hypothesis that megaraptorids were apex predators in South America from the Turonian through the Santonian or early Campanian, following the extinction of carcharodontosaurids.