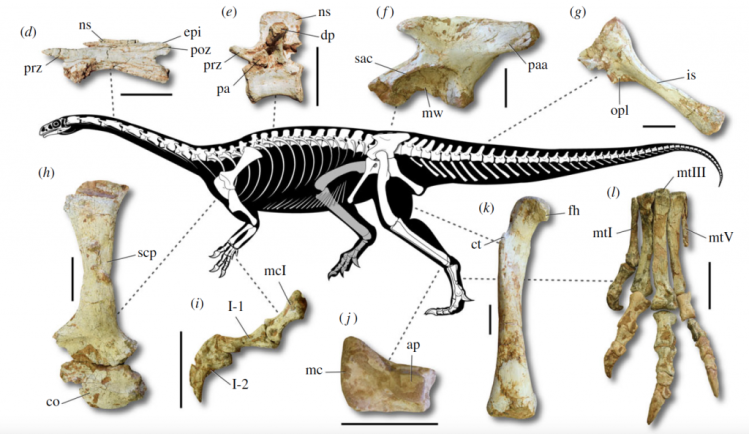 Sauropodomorphs were the largest land animals ever recorded in the history of life. Additionally to their colossal size, the sauropodomorph bauplan is also characterised by a small head, long neck, barrel-shaped body and columnar limbs. The group was successful and diverse, achieving a worldwide geographical distribution. Nevertheless, the rise of sauropodomorphs is still poorly understood due to the scarcity of well-preserved fossils in early Norian rocks. The Wachholz site (Caturrita Formation), in southern Brazil, is an important window to early Norian land ecosystems. This unit has yielded several sauropodomorphs, including Unaysaurus tolentinoi and the recently described Macrocollum itaquii, the oldest long-necked dinosaur known, that shed light on the rise of the group.

Discovered in 2012, from rocks belonging to the upper part of the Candelaria Sequence constrained as about 225 Ma, the three individuals described as M. itaquii are relatively well preserved. The holotype specimen (CAPPA/UFSM 0001a) consists of an almost complete and articulated skeleton. The two paratype specimens (CAPPA/UFSM 0001b and CAPPA/UFSM 0001c) are both articulated skeletons with one missing a skull and its cervical series. The clustered preservation of the three skeletons also represents the oldest evidence of gregarious behaviour in sauropodomorphs, a pattern seen in other Triassic associations, such as the ‘Plateosaurus bonebed’ from Central Europe, and the Mussaurus remains from the Laguna Colorada Formation, Argentina. 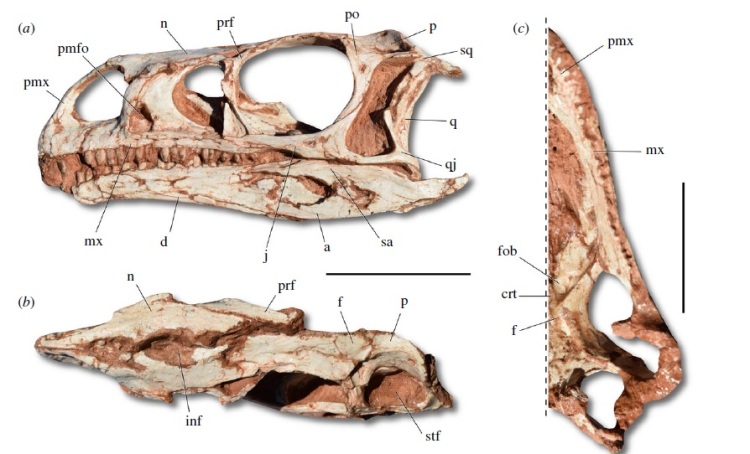 M. itaquii was only 3.5 meters long and weighed about 101.6 kilograms, and differs from all other known sauropodomorphs in possessing the following characters: antorbital fossa perforated by a promaxillary fenestra; medial margin of the supratemporal fossa with a simple smooth curve at the frontal/parietal suture; proximal articular surface of metacarpal I transversely narrow; acetabulum not fully open; ischiadic longitudinal groove not reaching the caudal half of the ischium; absence of trochanteric shelf on the femur; medial condyle of distal femoral articulation subrectangular in distal view; proximal end of metatarsal II with a straight medial margin. 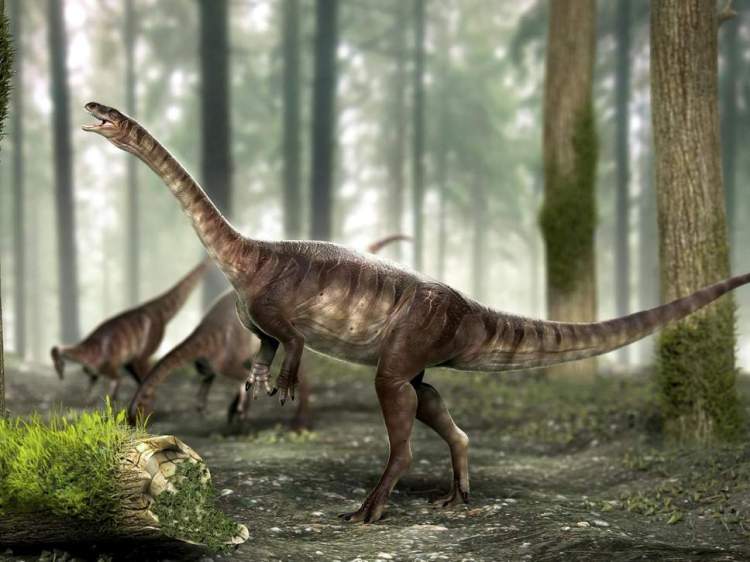 An artist’s impression of M. itaquii.

In contrast to most Carnian members of the group, the teeth of M. itaquii and other Norian taxa are fully adapted to an omnivore/herbivore diet. The neck elongation may also have provided a competitive advantage for gathering food resources, allowing members of the group to reach higher vegetation. The modifications of the hindlimb of M. itaquii could be related to the progressive loss of cursorial habits. 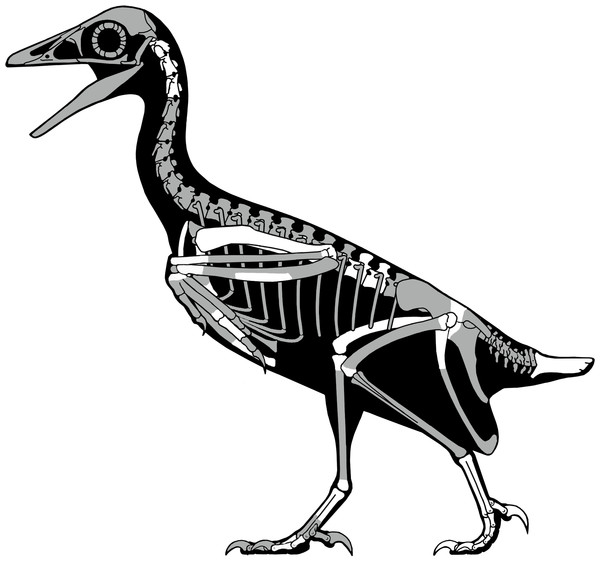 Birds originated from a theropod lineage more than 150 million years ago. By the Early Cretaceous, they diversified, evolving into a number of groups of varying anatomy and ecology. In recent years, several discovered fossils of theropods and early birds have filled the morphological, functional, and temporal gaps along the line to modern birds. Most of these fossils are from the Jehol Biota of northeastern China, dated between approximately 130.7 and 120 million years ago. Among them was the long bony-tailed Jeholornis, only slightly more derived than Archaeopteryx, that lived with Sapeornis, Confuciusornis, and the earliest members of Enantiornithes.

Enantiornithes are the most diverse group of Mesozoic birds. Their remains have been collected on every continent except Antarctica, although their fossil record is particularly poor in North America and limited to the Late Cretaceous. The first probable enantiornithines from North America were collected in the 19th Century, and may be referable to Avisaurus archibaldi. Originally, A. archibaldi was described as a member of a new clade of non-avian theropod dinosaurs, the Avisauridae, the first recognized clade of enantiornithines, defined as “the common ancestor of Neuquenornis volans and Avisaurus archibaldi plus all its descendants”. 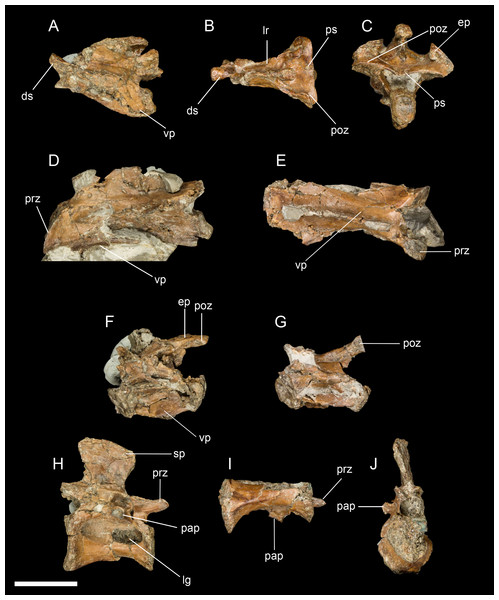 Best-preserved cervical and thoracic vertebrae, including the axis of Mirarce (From Atterholt et al., 2018)

The most complete known North American enantiornithine, the so-called “Kaiparowits avisaurid”, was collected in 1992. The specimen was recognized as a new taxon, Mirarce eatoni. Named for its spectacular preservation and level of morphological detail, the holotype (UCMP 139500) of this large, turkey-sized avisaurid enantiornithine is a three-dimensional partial skeleton consisting of several cervical and thoracic vertebrae (including the axis), the pygostyle, almost all phalanges from the left pes and several from the right, a complete humerus, femur, and tarsometatarsus, a partial scapula, coracoid, furcula, and tibiotarsus, as well as fragments of the sternum, radius, ulna, carpometacarpus, and manual phalanges.

The preserved sternal fragment of Mirarce indicates the presence of a well-developed ventral keel, very similar to that observed in Neuquenornis. In modern birds, the narrow furcula and the remige papillae, transfer aerodynamic forces from the feathers to the wing skeleton. These features were also present in Mirarce, and support the hypothesis that at least some lineages of enantiornithines convergently achieved more advanced aerial capabilities by the Late Cretaceous. 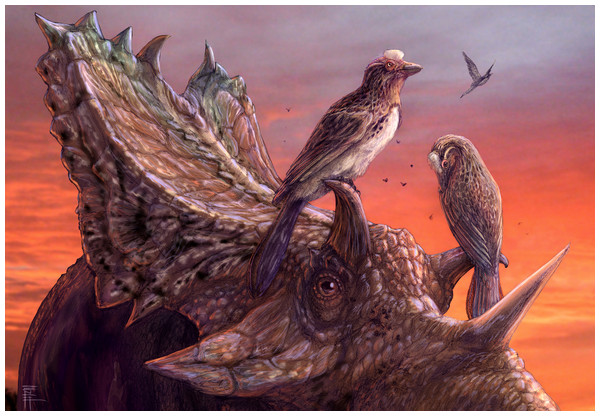 The Enantiornithes have a long evolutionary history, and surviving up to the K–Pg boundary. Several trends have been suggested for the group, including: a general increase in range of body sizes; a greater degree of fusion of compound elements, and the appearance of advanced flight-related features evolved in parallel to the neornithine lineage (like manual reduction, loss of teeth, increase in size of sternal keel). It has been proposed that they were primarily forest dwellers, so they disappeared after the Chicxulub impact triggered widespread destruction of forests.

Atterholt J, Hutchison JH, O’Connor JK. (2018) The most complete enantiornithine from North America and a phylogenetic analysis of the Avisauridae. PeerJ 6:e5910 https://doi.org/10.7717/peerj.5910