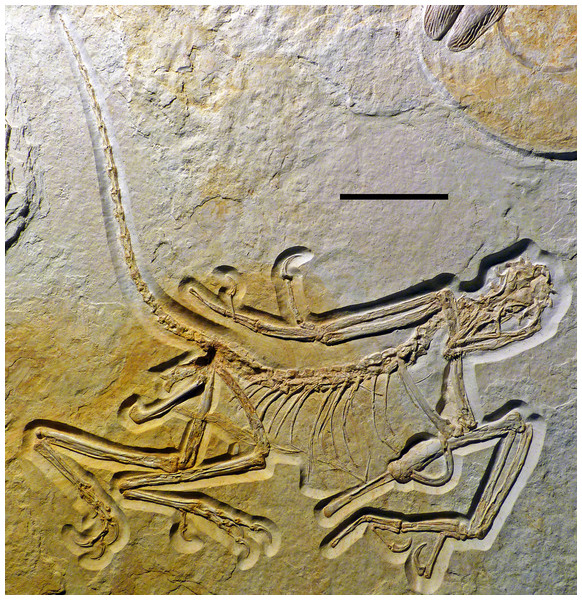 Overview of the skeleton of the new Archaeopteryx specimen (From Rauhut et al., 2018)

The Archaeopteryx story began in  the summer of 1861, two years after the publication of the first edition of Darwin’s Origin of Species, when workers in a limestone quarry in Germany discovered the impression of a single 145-million-year-old feather. On August 15, 1861, German paleontologist Hermann von Meyer wrote a letter to the editor of the journal Neues Jahrbuch für Mineralogie, Geologie und Palaeontologie, where he made the first description of the fossil. On on September 30, 1861, he wrote a new letter:  “I have inspected the feather from Solenhofen closely from all directions, and that I have come to the conclusion that this is a veritable fossilisation in the lithographic stone that fully corresponds with a birds’ feather. I heard from Mr. Obergerichtsrath Witte, that the almost complete skeleton of a feather-clad animals had been found in the lithographic stone. It is reported to show many differences with living birds. I will publish a report of the feather I inspected, along with a detailed illustration. As a denomination for the animal I consider Archaeopteryx lithographica to be a fitting name”.

The near complete fossil skeleton found in a Langenaltheim quarry near Solnhofen – with clear impressions of wing and tail feathers –  was examined by Andreas Wagner, director of the Paleontology Collection of the State of Bavaria in Germany. He reached the conclusion that the fossil was a reptile, and gave it the name Griphosaurus. He wrote: “Darwin and his adherents will probably employ the new discovery as an exceedingly welcome occurrence for the justification of their strange views upon the transformations of animals.” In later editions of The Origin of Species, Darwin indeed mention the Archaeopteryx: “That strange bird, Archaeopteryx, with a long lizardlike tail, bearing a pair of feathers on each joint, and with its wings furnished with two free claws . . . Hardly any recent discovery shows more forcibly than this, how little we as yet know of the former inhabitants of the world.” 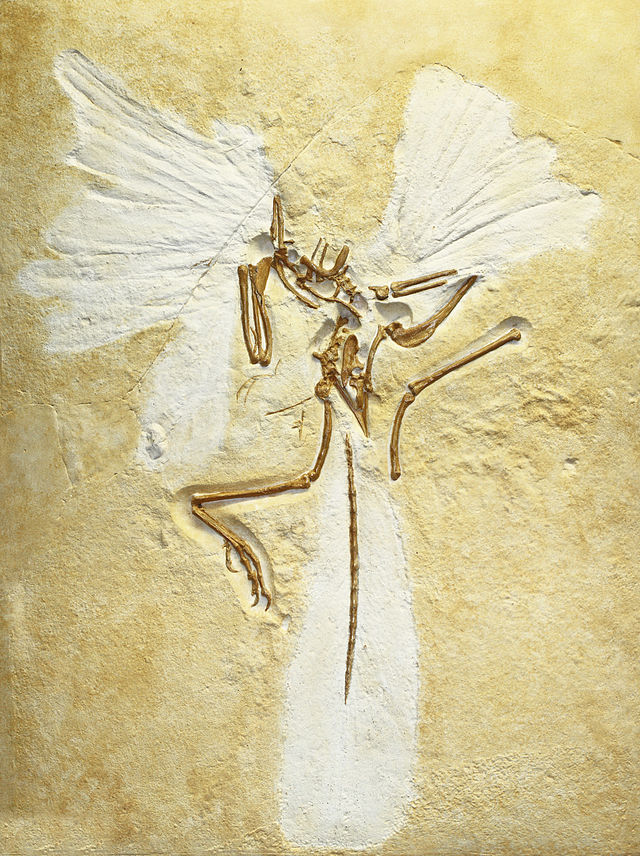 Over the years, eleven Archaeopteryx specimens has being recovered. The new specimen from the village of Schamhaupten, east-central Bavaria is the oldest representative of the genus (earliest Tithonian). The new specimen was discovered by a private collector. Although it was registered as German national cultural heritage, which guarantees its permanent availability, the specimen remains in private hands (Datenbank National Wertvollen Kulturgutes number DNWK 02924).

The new specimen is preserved as a largely articulated skeleton. However, the shoulder girdles and arms, as well as the skull have been slightly dislocated from their original positions, but the forelimbs remain in articulation. The skull is triangular in lateral outline and has approximately 56 mm long. The orbit is the largest cranial opening (approximately 16 mm long), and the lateral temporal fenestra is collapsed. There are probably four tooth positions in the premaxilla, nine in the maxilla and 13 in the dentary. 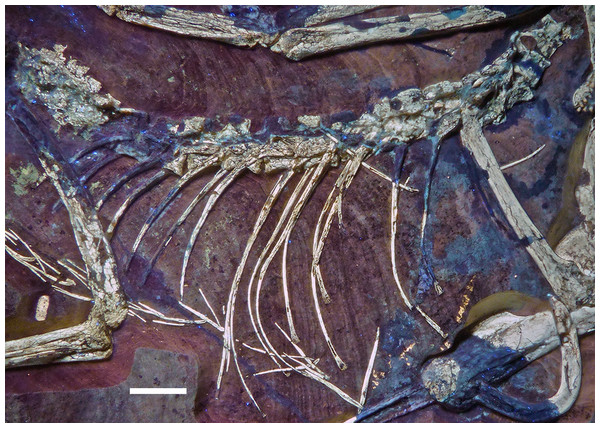 The postcranial skeleton was affected by breakage and loss of elements prior to or at the time of discovery. The sacral region, and the caudal vertebrae are very poorly preserved. Several dorsal ribs are preserved, and gastralia ribs are present in the thoracic region and the abdominal region. The shoulder girdle comprises the scapula, coracoid and furcula. Both humeri are poorly preserved. Parts of the phalanges are, largely poorly, preserved, and they do not show much detail. The pubic shafts are slender and very slightly flexed posteroventrally, an as in all specimens of Archaeopteryx, the distal end of the ischium is bifurcated. The femora are also poorly preserved and largely collapsed. Both tibiae are preserved in articulation with the fibulae and the proximal tarsals. The digits of the feet are complete on both sides, but partially overlapping. 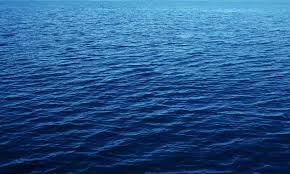 Earth is the only planet in our Solar System with high concentrations of gaseous diatomic oxygen. Simultaneously, this unique feature of Earth’s atmosphere has allowed the presence of an ozone layer that absorbed UV radiations. The progressive oxygenation of the atmosphere and oceans was sustained by an event of high organic carbon burial, called the Paleoproterozoic Lomagundi Event (ca. 2.3-2.1 billion years ago), which lasted well over 100 million years.

Oxygen is fundamental to life, and influences biogeochemical processes at their most fundamental level. But the oxygen content of Earth has varied greatly through time. In Earth history there have been relatively brief intervals when a very significant expansion of low-oxygen regions occurred throughout the world’s oceans. The discovery of black shales at many drill sites from the Atlantic, Indian, and the Pacific Ocean led to the recognition of widespread anoxic conditions in the global ocean spanning limited stratigraphic horizons. In 1976, S. O. Schlanger and H. C. Jenkyns termed these widespread depositional black shale intervals as “Oceanic Anoxic Events”. This was one of the greatest achievement of the DSDP (Deep Sea Drilling Project). 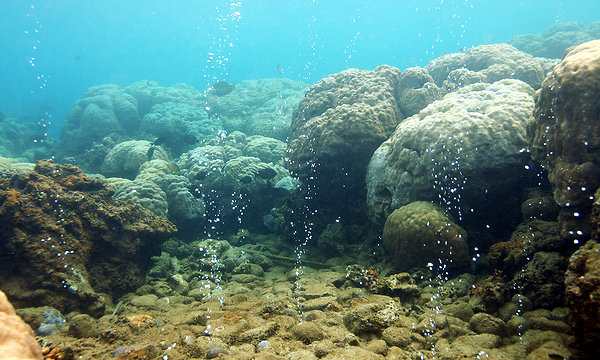 Corals one of the most vulnerable creatures in the ocean. Photo Credit: Katharina Fabricius/Australian Institute of Marine Science

Human activity is a major driver of the dynamics of Earth system. After the World War II, the impact of human activity on the global environment dramatically increased. Over the past 50 years, open ocean lost an estimated 2%, or 4.8 ±2.1 petamoles (77 billion metric tons), of its oxygen, and ocean oxygen minimum zones (OMZs) have expanded by an area about the size of the European Union. Deoxygenation is linked to other ocean stressors, including warming and acidification.

Ocean warming reduces the solubility of oxygen, and raises metabolic rates accelerating the rate of oxygen consumption. Warming also influence on thermal stratification and indirectly enhances salinity driven stratification through its effects on ice melt and precipitation. The increased stratification alters the mainly wind-driven circulation in the upper few hundred meters of the ocean and slows the deep overturning circulation. Intensified stratification may account for the remaining 85% of global ocean oxygen loss by reducing ventilation nd by affecting the supply of nutrients controlling production of organic matter and its subsequent sinking out of the surface ocean. Warming is predicted to exacerbate oxygen depletion in coastal systems through mechanisms similar to those of the open ocean. 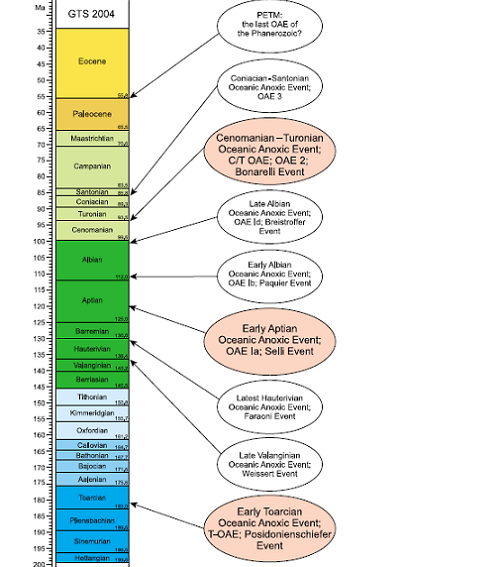 The geological records show that large and rapid global warming events occurred repeatedly during the course of Earth history. The growing concern about modern climate change has accentuated interest in understanding the causes and consequences of these ancient abrupt warming events. The early Toarcian Oceanic Anoxic Event  (T-OAE; ∼183 mya) in the Jurassic Period is associated with a major negative carbon isotope excursion, mass extinction, marine transgression and global warming. Besides, the marked expansion of the oxygen minimum zone over the last decades, is quite similar to the model originally invoked for the genesis of Cretaceous OAEs. The better understanding of the Mesozoic ocean-climate system and the formation of OAEs would help us to predict environmental and biotic changes in a future greenhouse world. 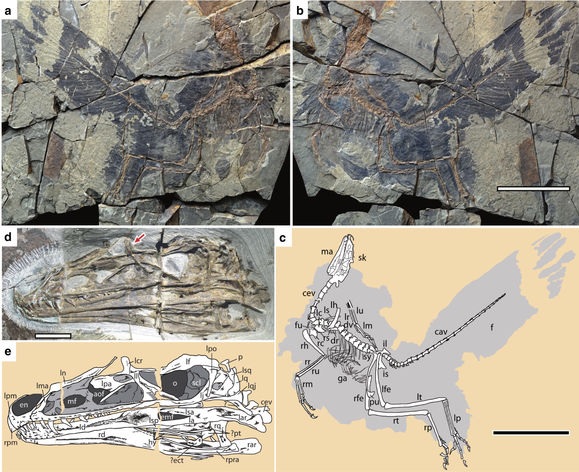 Over the last 10 years, theropod dinosaurs from the Middle-Late Jurassic Yanliao Biota have offered rare glimpses of the early paravian evolution and particularly the origin of birds. The first discovered Yanliao non-scansoriopterygid theropod was Anchiornis huxleyi, and since then several other extremely similar species have also been reported. Caihong juji, a newly discovered Yanliao specimen, exhibits an array of osteological features, plumage characteristics, and putative melanosome morphologies not previously seen in other Paraves. The name Caihong is from the Mandarin ‘Caihong’ (rainbow). The specific name, juji is from the Mandarin ‘ju’ (big) and ‘ji’ (crest), referring to the animal’s prominent lacrimal crests.

The holotype (PMoL-B00175) is a small, articulated skeleton with fossilized soft tissues, preserved in slab and counter slab, collected by a local farmer from Qinglong County, Hebei Province, China, and acquired by the Paleontological Museum of Liaoning in February, 2014. The specimen (estimated to be ~400 mm in total skeletal body length with a body mass of ~475 g) exhibits the following autapomorphies within Paraves: accessory fenestra posteroventral to promaxillary fenestra, lacrimal with prominent dorsolaterally oriented crests, robust dentary with anterior tip dorsoventrally deeper than its midsection and short ilium.

Caihong juji differs from Anchiornis huxleyi in having a shallow skull with a long snout, forelimb proportionally short, and forearm proportionally long. Caihong also resembles basal troodontids and to a lesser degree basal dromaeosaurids in dental features (anterior teeth are slender and closely packed, but middle and posterior teeth are more stout and sparsely spaced; and serrations are absent in the premaxilla and anterior maxilla). 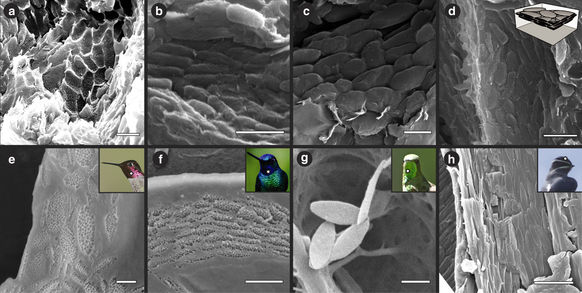 Feathers are well preserved over the body, but in some cases, they are too densely preserved to display both gross and fine morphological features. The contour feathers are proportionally longer than those of other known non-avialan theropods. The tail feathers resemble those of Archaeopteryx, and the troodontid Jinfengopteryx in having large rectrices attaching to either side of the caudal series forming a frond-shaped tail, a feature that has been suggested to represent a synapomorphy for the Avialae.

But, the most remarkable feature observed in Caihong, is the presence of some nanostructures preserved in the head, chest, and parts of its tail, that have been identified as melanosomes. They are long, flat, and organized into sheets, with a pattern similar of those of the iridescent throat feathers of hummingbirds.

Recovered as a basal deinonychosaur, Caihong shows the earliest asymmetrical feathers and proportionally long forearms in the theropod fossil record wich indicates locomotor differences among closely related Jurassic paravians and has implications for understanding the evolution of flight-related features. 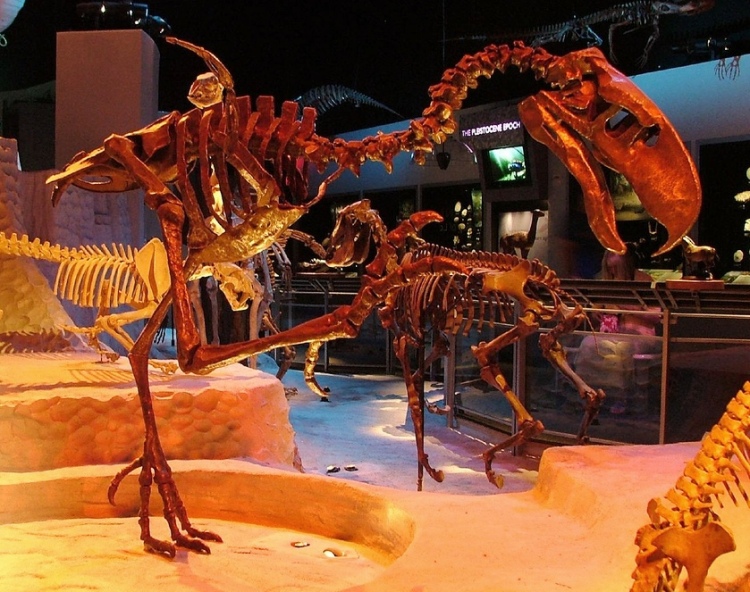 Skeleton of the terror bird Titanis walleri at the Florida Museum of Natural History.

In 1887, Florentino Ameghino, the “father of Argentinian Palaeontology”, described a large, toothless jaw from the Miocene of the Province of Santa Cruz, naming it Phorusrhacos longissimus and assigning it to a new family of edentulous mammal. He used this finding as a critical evidence for his contention that modern mammalian lineages originated in Argentina and later spread across the globe. Four years later, Moreno and Mercerat recognized for the first time that the mandible described by Ameghino was really that of a bird.

The Phorusrhacidae, the so-called “terror birds”, were a group of medium-to large sized extinct ground-dwelling birds, which lived during the Cenozoic, and became the dominant carnivores of South America while it was an isolated continent. They are characterized by their elongated hindlimbs, narrow pelvis, reduced forelimbs, and their huge skull with their tall, long, narrow, and hollow beaks ended in a hook. Kelenken guillermoi, is the largest known phorusrhacid and lived in the Miocene of Argentina. The skull reaches a length of 71.6 cm and the whole animal would reach 3 m high. Kelenken is also represented by a tarsometatarsus and a broken phalanx and proceeds from the locality of Comallo (Río Negro Province, Argentina). Titanis walleri, lived during the Pliocene and Pleistocene of North America. It was 2.5 metres tall and weighed approximately 150 kilograms. This giant bird is interpreted as an early immigrant during the Great American Interchange. 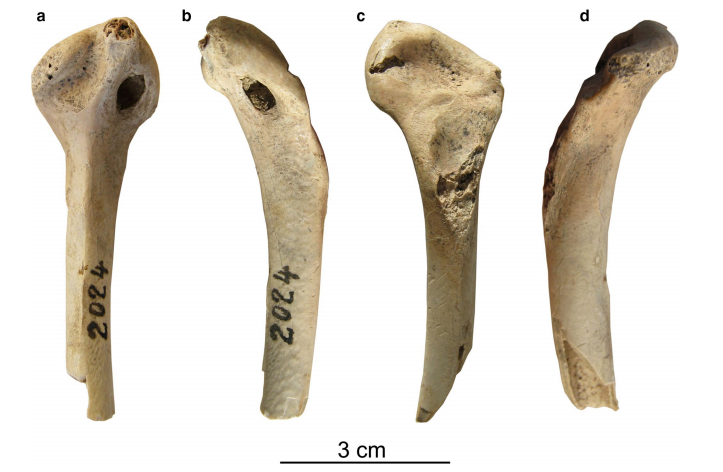 At the end of the Pliocene, Phorusrhacids decline in diversity. Two new specimens support the hypothesis that the latest geologic occurrence of the Phorusrhacidae comes from late Pleistocene sediments of Uruguay. The remains comprise the distal portion of right tarsometatarsus and a left humerus; the latter is assigned to the genus Psilopterus. The first material (MPAB-520) comes from Soriano, Uruguay, and the sediments belong to the Dolores Formation (Lujanian Stage-Age, late Pleistocene/early Holocene). The following features identify the specimen as a phorusrhacid bird. (1) a large and distally expanded trochlea metatarsi III; (2) a very narrow trochlea metatarsi II with the articular surface transversally convex and without any longitudinal sulcus (in dorsal and distal views); (3) in dorsal view the trochlea metatarsi II is almost parallel and much shorter than the middle trochlea, and forming a narrow notch between trochleae II and III. The second material consists of a left humerus without distal epiphysis belonged to Museo Paleontológico Alejandro Berro (MPAB-2024).

There are two explanatory hypotheses proposed for the decline of the terror birds: environmental reasons or direct competition (at least for the larger specimens) with placental carnivore’s immigrants to South America after the setting of the Panamanian bridge.