The nineteen century was the “golden age” of Geology. The Industrial Revolution ushered a period of canal digging and major quarrying operations for building stone. These activities exposed sedimentary strata and fossils. So, the concept of an ancient Earth became part of the public understanding and Literature influenced the pervasiveness of geological thinking. The most popular aspect of geology was  the collecting of fossils and minerals and the nineteenth-century geology, often perceived as the sport of gentlemen, was in fact, “reliant on all classes” (Buckland, 2013). Women were free to take part in collecting fossils and mineral specimens, and they were allowed to attend lectures but they were barred from membership in scientific societies.

By 1828, Mary Anning (21 May 1799–9 March 1847) had been collecting fossils from Lyme Regis for at least 17 years. Her father was a carpenter and an amateur fossil collector who died when Mary was eleven. He trained Mary and her brother Joseph in how to look and clean fossils. After the death of her father, Mary and Joseph used those skills to search fossils on the local cliffs, that sold as “curiosities”. The source of the fossils was the coastal cliffs around Lyme Regis, one of the richest fossil locations in England and part of a geological formation known as the Blue Lias.

On December of 1828, Mary found the first pterosaur skeleton outside Germany. The first pterosaur described by Collini in 1784, was named Pterodactylus antiquus. The second holotype was discovered in 1812 and was named Ornithocephalus brevirostris. William Buckland made the announcement of Mary’s discovery in the Geological Society of London and named Pterodactylus macronyx in allusion to its large claws. The animal had a wingspan of around 1.4 m with an elongate tail. The specimen was twice the size of Pterodactylus antiquus.

The skull of Anning’s specimen had not been discovered, but Buckland thought that the fragment of jaw in the collection of the Philpot sisters of Lyme belonged to a pterosaur. In the 1850s, another specimen was found, this time with a skull at Lyme and another skull was found later. The skulls of the Lyme Regis pterosaurs bore no resemblance to those of the Solnhofen Limestone in Germany, so Richard Owen erected the new generic name Dimorphodon (Martill, 2013).

Water colour by the Reverend G. E. Howman (From Martill 2013)

In 1829 the Reverend George Howman painted the earliest restoration of a pterosaur. The watercolour also incorporates a ruined castle and a ship, but amazingly predicts aspects of the anatomy of pterosaurs not brought to light by fossils discovered until a few decades later. For instance, the first pterosaur with a preserved head crest was not described until 1876. The animal painted by Howman had an elongate head with small, widely spaced teeth in a long rostrum – exactly like those of the Pterodactylus antiquus described by Collini. However, Howman’s depiction of the wings is seriously flawed except for the presence of a membranous flight surface.

There’s little doubt that the watercolour by Howman was intended to represent the Pterodactylus discovered by Mary Anning. A label on the back of the work reads: ‘By the Revd G. Howman from Dr [Burckhardt’s] account of a flying dragon found at Lyme Regis supposed to be noctivagous’ .

In her later years, Mary Anning suffered some serious financial problems. Henry De la Beche helped her during those hard times. Also William Buckland persuaded the British Association for the Advancement of Science and the British government to award her an annuity of £25, in return for her many contributions to the science of geology. 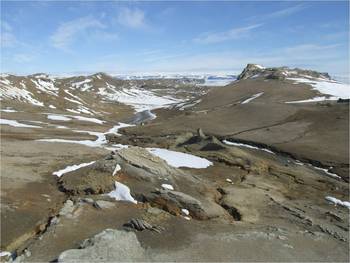 During the last 540 million years, Earth’s climate has oscillated between three basic states: Icehouse, Greenhouse (subdivided into Cool and Warm states), and Hothouse (Kidder & Worsley, 2010). The “Hothouse” condition is relatively short-lived and is consequence from the release of anomalously large inputs of CO2 into the atmosphere during the formation of Large Igneous Provinces (LIPs), when atmospheric CO2 concentrations may rise above 16 times (4,800 ppmv), while the “Icehouse” is characterized by polar ice, with alternating glacial–interglacial episodes in response to orbital forcing. The ‘Cool Greenhouse” displays  some polar ice and alpine glaciers,  with global average temperatures between 21° and 24°C. Finally, the ‘Warm Greenhouse’ lacked of any polar ice, and global average temperatures might have ranged from 24° to 30°C.

Reconstructions of Earth’s history have considerably improved our knowledge of episodes of rapid emissions of greenhouse gases and abrupt warming. Consequently, the development of different proxy measures of paleoenvironmental parameters has received growing attention in recent years.

The early Eocene was characterized by a series of short-lived episode  of global warming, superimposed on a long-term early Cenozoic warming trend. Atmospheric CO2 was the major driver of the overall warmth of the Eocene. For  the  Paleocene-Eocene  Thermal  Maximum (PETM; 55.8 million years ago), and the Early Eocene Climate Optimum (EECO; 51 to 53 million years ago) the transient rise of global temperatures has been estimated to be 4 to 8° (Hoffman et al., 2012).

Reconstructions using multiple climate proxy records, identified the EECO as the warmest interval of the past 65 million years. One such proxy measure is the stomatal frequency of land plants, which has been shown in some species to vary inversely with atmospheric pCO2 and has been used to estimate paleo-pCO2 for multiple geological time periods. Stomata are the controlled pores through which plants exchange gases with their environments, and play a key role in regulating the balance between photosynthetic productivity and water loss through transpiration. (Smith et al., 2010).

Foraminiferal assemblage of the EECO (From KHANOLKAR and SARASWATI, 2015)

Pollen and other palynomorphs proved to be an extraordinary tool to palaeoenvironmental reconstruction. Terrestrial  microflora from the EECO indicates a  time  period  with  warm  and  humid  climatic  conditions and displays a higher  degree  of tropicality  than the microflora of  the PETM.

A new high-fidelity record of CO2 can be obtained by using the boron isotope of well preserved planktonic foraminifera. The boron isotopic composition of seawater is also recquiered to estimate the pH. The global mean surface temperature change for the EECO is thought to be ~14 ± 3 °C warmer than the pre-industrial period, and ~5 °C warmer than the late Eocene.

Evolution of atmospheric CO2 levels and global climate over
the past 65 million years (From Zachos et al., 2008)

Since the start of the Industrial Revolution the anthropogenic release of CO2 into the Earth’s atmosphere has increased a 40%. Glaciers  from the Greenland and Antarctic Ice Sheets are fading away, dumping 260 billion metric tons of water into the ocean every year. The ocean acidification is occurring at a rate faster than at any time in the last 300 million years, and  the patterns of rainfall and drought are changing and undermining food security which have major implications for human health, welfare and social infrastructure. These atmospheric changes follow an upward trend in anthropogenically induced CO2 and CH4. If  fossil-fuel emissions continue unstoppable, in less than 300 years pCO2 will reach a level not present on Earth for roughly 50 million years.