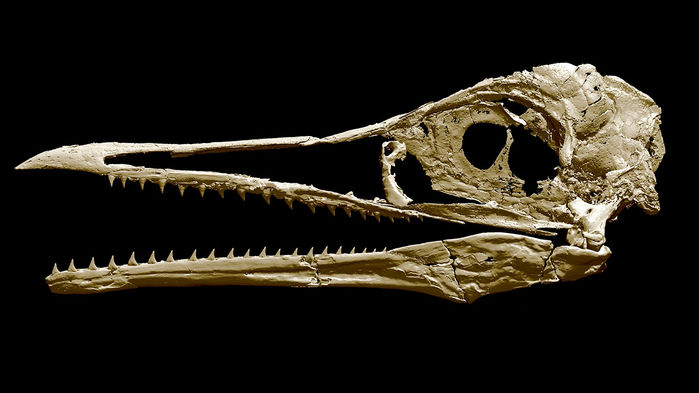 Birds originated from a theropod lineage more than 150 million years ago. By the Early Cretaceous, they diversified, evolving into a number of groups of varying anatomy and ecology. Much of birds anatomical variety is related to their skulls and in particulary with their beaks.

Discovered in 1870 by Benjamin Franklin Mudge, a professor from Kansas State Agricultural College and good friend of Othniel Charles Marsh, Ichthyornis, which means‭ ‘‬fish bird‭’‭, was a small early ornithuromorph from the Late Cretaceous of North America. Ornithuromorphs, include Gansus, Patagopteryx, Yixianornis, and Apsaravis, which form a grade on the line to Ornithurae, a derived subgroup that includes modern birds and their closest fossil relatives. 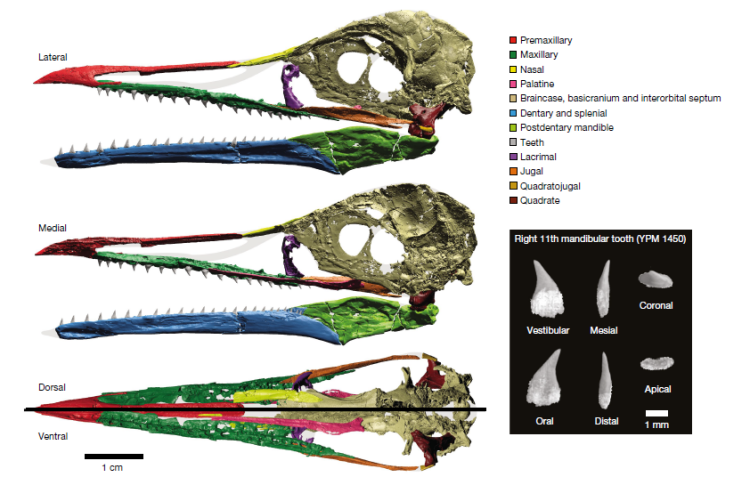 The skull of I. dispar shows a transitional point in the evolutionary history of birds. The upper margin of the beak is concave in profile, a derived condition shared with living birds. The fused, toothless premaxillae have a terminal hook, and occupy the anterior quarter of the rostrum. Neurovascular foramina indicate the presence of a highly keratinized region of rhamphotheca called the premaxillary nail. The maxilla is plesiomorphically long. The dentition is extensive in both upper and lower jaws. A sulcus on the rostral half of the maxilla suggests a broad naso-maxillary contact and a correspondingly broad postnarial bar. The palatine is narrow and elongate, unlike that of Archaeopteryx and more stemward theropods. The quadrate exhibits two rounded capitular condyles that fit into cotyles on the prootic and squamosal bones to form a mobile joint with the cranium. The arrangement of the rostrum, jugal, and quadratojugal, the mobile suspensorium and the narrow, linear palatine all indicate that I. dispar possessed a fully functional avian cranial kinetic system.

The endocranial cavity appears essentially modern in sagittal section. The forebrain was enlarged and posteroventrally rotated while the optic lobes were inflated and laterally shifted, as in living birds. The squamosal exhibits an archaic, deinonychosaur-like morphology. The zygomatic process is deep and triangular in lateral view. The nuchal crest extends from the midline of the skull onto the zygomatic process, forming the upper edge of the squamosal bone, as in non-avialan theropods.

Since its discovery, Ichthyornis has been viewed as a classical example of evolution, due to the combination of an advanced postcranial morphology and retention of toothed jaws. In a letter, dated August 31, 1880, Charles Darwin thanks Marsh for a copy of his monograph Odontornithes, which reported two contrasting bird genera: Hesperornis, which was about 1.8 metres tall, and Ichthyornis, which had an average wingspan of about 60 centimetres. In his letter, Darwin wrote: “I received some time ago your very kind note of July 28th, & yesterday the magnificent volume. I have looked with renewed admiration at the plates, & will soon read the text. Your work on these old birds & on the many fossil animals of N. America has afforded the best support to the theory of evolution, which has appeared within the last 20 years.”

One thought on “Ichthyornis and the evolution of the avian skull.”