Herrerasauridae is a basal clade of predatory, obligatorily bipedal dinosaurs recorded from the Upper Triassic of Argentina and Brazil (although are putative records of herrerasaurids from the mid-late Norian strata of Europe and North America). The clade unequivocally comprises three species: Herrerasaurus ischigualastensis, Sanjuansaurus gordilloi, both from the Ischigualasto Formation of Argentina, and Staurikosaurus pricei, from the lower portion of the Santa Maria Formation of southern Brazil. Now, a new specimen from the Santa Maria Formation shed light into poorly understood aspects of the Herrerasauridae anatomy.

Named Gnathovorax cabreirai, the new dinosaur was found in 2014 at the Marchezan site, municipality of São João do Polêsine, Rio Grande do Sul, Brazil. The generic name means “jaws inclined to devour”. The specific name honors Dr. Sérgio Furtado Cabreira, the palaeontologist that found the specimen. The Santa Maria Formation in southern Brazil, comprises a succession of Middle to Late Triassic sedimentary rocks that have been long renowned for their rich tetrapod fossils including one of the oldest (and the best preserved) associations of dinosaur and dinosaur precursor. 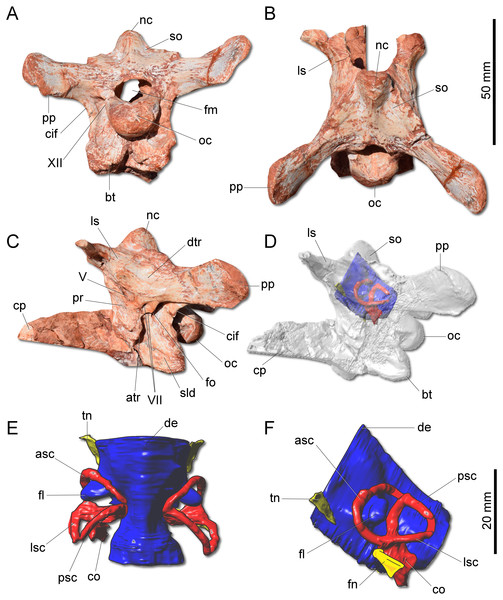 Photographs and reconstruction of the braincase and endocast of Gnathovorax cabreirai. From Pacheco et al., 2019.

Gnathovorax lived around 230 million years ago and measured about three meters in length. The holotype (CAPPA/UFSM 0009) is an almost complete and partially articulated skeleton. The skull is almost entirely preserved. Among other characters, Gnathovorax presents three premaxillary teeth; an additonal fenestra between the maxilla and premaxilla contact; two well defined laminae in the antorbital fossa of the maxilla, with a depression between them. The proximal portion of the femur lacks a caudomedial tuber. The tibia equals 90% of the femoral length and there are three phalanges in pedal digit V.

The study of the internal anatomy of the skull through CT-scanning reveals several aspects of the neuroanatomy of this group. The presence of a well-developed floccular fossa lobes of the cerebellum is related to motor control of the eye and head, which in turn may be related to the predatory habit of the group.