Ischigualasto is an arid, sculpted valley, in northwest Argentina (San Juan Province), limiting to the north with the Talampaya National Park, in La Rioja Province. Both areas belong to the same geological formation: the Ischigualasto-Villa Unión Basin, which is centered on a rift zone that accumulated thick terrestrial deposits during the Triassic.

During Mesozoic time, the southwestern margin of Pangea produced a region of extensional deformation cratonward of the proto-Andean magmatic arc, and the Ischigualasto basin is one of a series of continental-rifts that developed in the region as a result of this extension.

The Ischigualasto Formation has 300–700 m of mudstone, sandstone, conglomerate, and basalt, and consists of four lithostratigraphic members which in ascending order include the La Peña Member, the Cancha de Bochas Member, the Valle de la Luna Member, and the Quebrada de la Sal Member.

Several thin volcanic ash horizons, indicates that the deposition of the Ischigualasto Formation began at the Carnian Stage (approximately 228 mya). 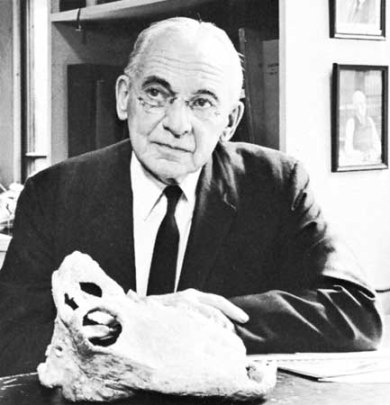 Adolf Stelzner in 1889 published the first data on the geology of Ischigualasto, but it was not until 1911 that Guillermo Bodenbender briefly refers to the fossils of the site. In the early 40′s, Joaquin Frenguelli, initiates a geological survey in the western margen of the basin. Later, in 1943, Angel Cabrera described fragmentary therapsid fossils.

On April, 1958, after an expedition of 6 month in Mendoza Province (south of San Juan Province) with negative results, Alfred Romer arrived to Ischigualasto for first time. He found a rhynchosaur skull the following day, and other fossil finds were reported by every crew member. On May 14, Romer wrote in his field notebook: “more and more fossils coming in daily, in blocks and packages.”

In the same year, but a few months after Romer’s expedition, the University of Tucumán sent a team led by Osvaldo Reig and Jose Bonaparte.

Skull of Herrerasaurus ischigualastensis discovered in 1958 by the Harvard Paleontological Expedition (Sereno, 2013)

The first skull and skeleton of Herrerasaurus were discovered by Romer in 1958 (five years before  Osvaldo Reig described it), but the fossils from Romer’s expedition, were impounded for two years at the port in Buenos Aires, and when finally arrived at Harvard they were set aside.

In 1961, the Argentinian team arrived to Valle Pintado, in the Cancha de Bochas Member of the Ischigualasto Formation, with the help of the local rancher Victorino Herrera, where they found the posterior one-half of a skeleton. That specimen was later designated as Herrerasaurus ischigualastensis.

Jose Bonaparte continued to work in the Ischigualasto Formation periodically in the late 1960s and early 1970′s.

In 1988, a joint expedition between the Universidad Nacional de San Juan, the Museo Argentino de Ciencias Naturales “Bernardino Rivadavia” in Buenos Aires and the University of Chigaco, lead by Paul Sereno and Fernando Novas discovered the first complete skeletons of Herrerasaurus ischigualastensis.

4 thoughts on “Ischigualasto, and the discovery of Herrerasaurus.”