2020 started with massive wildfires, locusts devouring crops across East Africa and the coronavirus outbreak. By early March, the World Health Organization (WHO) declared the coronavirus, SARS-CoV-2, to be a pandemic and recommend “surveillance to find, isolate, test and treat every case, to break the chains of transmission.”

The climate crisis escalated. Mega-fires were exacerbated by drought, and anthropogenic climate change. In September, the Arctic sea ice shrank to its second-lowest extent in more than 40 years. Meanwhile fossil explorations were put on hiatus because of the pandemic. We also lost two great paleontologists: Jose Bonaparte and Jenny Clack. But 2020 hasn’t been all bad. Cool new papers about fossil biosignatures, mass extinctions, the tetrapod transition to land (co-authored by Jenny Clack), the evolution of the avian brain, the first well-documented case of bone cancer in a non-avian dinosaur, the nature of the first dinosaur eggs, and perfectly preserved remains of an Ice Age cave bear, shapped a remarkable year in paleontology. Among the most striking fossil discoveries are:

This small, feathered dromaeosaurid theropod lived in the Early Cretaceous (Aptian) of China, and was discovered by a farmer more than a decade ago. The holotype (D2933) is a complete articulated skeleton (only some ribs are missing) and exhibits special preservation of keratinous structures. Wulong is distinguished by the following autapomorphic features: long jugal process of quadratojugal, cranially inclined pneumatic foramina on the cranial half of dorsal centra, transverse processes of proximal caudals significantly longer than width of centrum, presence of 30 caudal vertebrae producing a proportionally long tail, distally located and large posterior process of the ischium, and large size of supracoracoid fenestra (>15% of total area). The holotype has several gross osteological markers of immaturity like the unfused dorsal and sacral vertebrae, but mature feathers are present across the entire body of Wulong.

Tralkasaurus is a medium-sized abelisaurid, much smaller than large abelisaurids as Abelisaurus and Carnotaurus. The name derived from Tralka, thunder in Mapudungun language, and saurus, lizard in Ancient Greek. The specific name “cuyi” derived from the El Cuy, the geographical area at Rio Negro province, Argentina, where the fossil was found. The holotype MPCA-Pv 815 is represented by an incomplete specimen including a right maxilla, distorted and incomplete dorsal, sacral and caudal vertebrae, cervical ribs, and pubis. This four-meter-long (13-foot-long) theropod exhibits a unique combination of traits, including deeply incised and curved neurovascular grooves at the lateral maxillary body that originate at the ventral margin of the antorbital fossa, and shows an extensive antorbital fossa over the maxillary body that is ventrally delimited by a well-marked longitudinal ridge that runs from the promaxillary fenestra level towards the rear of the maxilla.

Asteriornis maastrichtensis is a small member of the clade Pangalloanserae, the group that includes Galliformes and Anseriformes, with an estimated body weight of about 400 grams. The holotype (NHMM, 2013 008) includes a nearly complete, articulated skull with mandibles, and associated postcranial remains preserved in four blocks. It was collected in 2000 by Maarten van Dinther. The new specimen, dated between 66.8 and 66.7 million years ago, reveals a previously undocumented combination of ‘galliform’ and ‘anseriform’ features that emphasizes the modular nature of the skull and bill of crown birds. The narrow and elongate hindlimbs and provenance from nearshore marine sediments suggest that Asteriornis might have had a shorebird-like ecology. The generic name is derived from the name of the Asteria, the Greek goddess of falling stars, and the Greek word ornis for bird. The specific name maastrichtensis honors the provenance of the holotype, the Maastricht Formation (the type locality of the Late Cretaceous Maastrichtian stage).

Overoraptor was a gracile theropod that reached about 1.3 m in total length. The name derived from the Spanish word “overo”, meaning piebald, in reference to the coloration of the fossil bones (a pattern of light and dark spots), and the word “raptor” from the Latin for thief. The species name honors Dr. Roberto Nicolás Chimento, who discovered the specimen. The holotype (MPCA-Pv 805) and paratype (MPCA-Pv 818) specimens of O. chimentoi were found in a quarry in association with disarticulated crocodilian and turtle bones. The new taxon comes from the Huincul Formation. The new taxon comes from the Huincul Formation. The unusual combination of a plesiomorphic hindlimb with features that are correlated with cursorial habits, and the more derived forelimb with features that show some adaptations related to active flight, placed Overoraptor, together with Rahonavis in a clade that is sister to Avialae.

Spinosaurus aegyptiacus is one of the most famous dinosaur of all time. It was discovered by German paleontologist and aristocrat Ernst Freiherr Stromer von Reichenbach in 1911. Almost a century later, a partial skeleton of a subadult individual of S. aegyptiacus was discovered in the Cretaceous Kem Kem beds of south-eastern Morocco. At the time of deposition, this part of Morocco was located on the southern margin of the Tethys Ocean and it was characterized by an extensive fluvial plain dominated by northward flowing rivers and terminating in broad deltaic systems on Tethys’ southern shores. The neotype of S. aegyptiacus preserves portions of the skull, axial column, pelvic girdle, and limbs. An international team led by Nizar Ibrahim published the first description of the fossil in 2014 and suggested that Spinosaurus may have been specialised to spend a considerable portion of their lives in water.

Kongonaphon kely, from the Middle to Late Triassic of Madagascar, is close to the ancestry of dinosaurs and pterosaurs. Discovered in 1998, the holotype (UA 10618) is a partial skeleton composed of a right maxilla, distal portion of the humerus, right femur, proximal portions of the right and left tibia, and indeterminate skeletal fragments. The most striking feature of Kongonaphon is its extraordinarily small size (estimated height,∼10 cm).

Digital reconstruction of the braincase of Niebla antiqua in right lateral (A), dorsal (B), and posterior (C) views. From Aranciaga et al., 2020

Niebla antiqua, a new specimen from the Late Cretaceous of Río Negro province, is an important addition to the knowledge of abelisaurid diversity. This new taxon is much smaller than other abelisaurids like Carnotaurus and Abelisaurus, with only 4–4.5 metres (13–15 ft) long. It was found near Matadero Hill, located within the Arriagada Farm, at 70 km south from General Roca city, Río Negro province, Argentina. The braincase of Niebla is exquisitely preserved, allowing the recognition of most cranial nerves and vascular foramina.

The skull of Oksoko avarsan in lateral view. From Funston et al., 2020.

Oksoko avarsan is a small oviraptorosaur, with a large, toothless beak and only two fingers on each forearm. The generic name is derived from the word Oksoko, one of the names of the triple-headed eagle in Altaic mythology. The specific name is derived from the Mongolian word avarsan, meaning rescued, because the holotype was rescued from poachers and smugglers in 2006. Preserved in an assemblage of four individuals, the holotype, MPC-D 102/110.a, is a nearly complete juvenile skeleton missing only the distal half of the tail. The excellent preservation of this assemblage provides strong evidence of gregarious behaviour.

Bagualia alba, recovered from the base of the Cañadón Asfalto Formation, lived 179 million years ago and is the oldest known eusauropod. Discovered in 2007 by an international team of researchers led by Argentinean paleontologist Diego Pol, the holotype of Bagualia alba (MPEF PV 3301) consists of a posterior half of a skull found in articulation with seven cervical vertebrae. It was found in close association with multiple cranial and postcranial remains belonging to at least three individuals. Body mass estimated suggests that Bagualia weighted 10 tons, approximately the size of two African elephants. The teeth have a D-shaped cross section, apical denticles, and buccal and lingual grooves. But the most striking feature of Bagualia is the enamel layer which is extremely thick, seven times that of other pre-volcanic herbivores, and is heavily wrinkled on its outer surface. 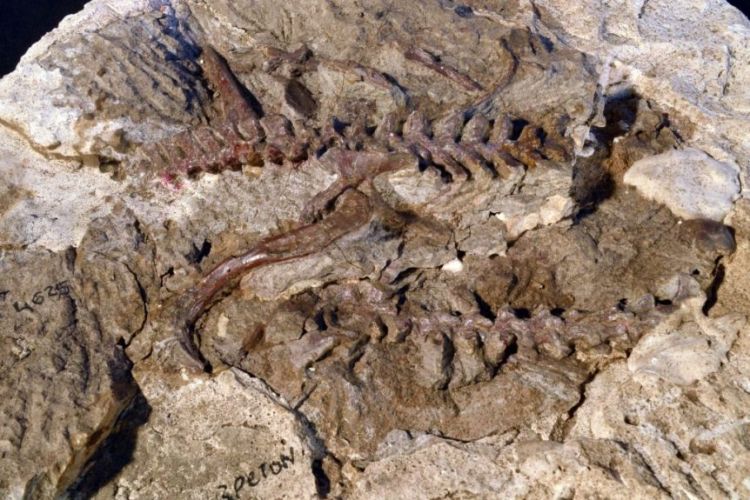 Lagerpetids are small to medium-sized (less than 1 m long), cursorial, non-volant reptiles from Middle–Upper Triassic of Argentina, Brazil, Madagascar, and North America. Based on the anatomical information from Lagerpeton chanarensis (from the Chañares formation, Argentina), Ixalerpeton polesinensis (from the Santa Maria Formation, Brazil), Kongonaphon kely (from Morondava Basin, Madagascar), and Dromomeron spp. (from North America), an international team lead by Martin Ezcurra from the Museo Argentino de Ciencias Naturales in Buenos Aires, Argentina, elucidated their relationship to pterosaurs. The recognition of this group as the sister taxon to pterosaurs provides clues to study the origin of Pterosauria, its specialized body plan and flying abilities.