Tyrannosaurus rex is the most iconic dinosaur of all time. It was discovered in the Hell Creek Formation by Barnum Brown in 1902, and later described  by Henry Fairfield Osborn in 1905. Osborn actually named two large Hell Creek tyrannosaurids, T. rex and Dynamosaurus imperiosus. He later realized that Dynamosaurus imperiosus and Tyrannosaurus rex were synonymous, but Tyrannosaurus has priority, as it preceded Dynamosaurus in the description (Osborn, 1906). Over he past 20 years, morphological, histological and functional studies expanded our knowledge of the T. rex and its closest relatives.

Much attention has focused on how T. rex achieved such massive size and how their skeletons changed during the transition from embryo to adult. Previous studies estimate that during its growth cycle, T. rex grew at almost 2.5 kilograms per day for about 14 years. This extraordinary rapid growth rate sets T. rex apart from other tyrannosaur species like Albertosaurus and Gorgosaurus. 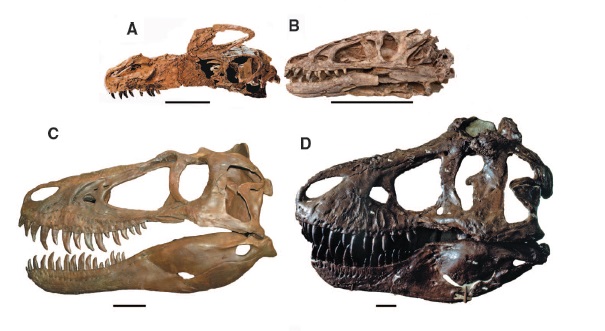 Skulls of the basal tyrannosauroids Guanlong (A), Dilong (B); Skulls of juvenile (C) and adult (D)Tyrannosaurus. All scale bars equal 10 cm. (Adapted from Brusatte et. al., 2010)

A new study by Thomas Carr reconstructs the growth series of T. rex. using an ontogram, the ontogenetic equivalent of cladogram, that shows the distinctives growth stages. The ontogram is composed of 21 growth stages. The growth series of T. rex was recovered using cladistic analysis based on an expanded dataset that includes chronological age, size, and size-independent cranial and postcranial characters. Five growth categories (juvenile, subadult, young adult, adult, senescent adult) were diagnosed based on histology, synontomorphies (the equivalent of a synapomorphy), and, in part, size and mass.

Tyrannosaurids are united by a conservative pattern of growth in which the skulls of juveniles were entirely reshaped during ontogeny. The sequence has been reconstructed by cladistic analysis. During the growth of an individual species, the skull and the jaws deepened, pneumatic bones inflated, the ornamented structures enlarged and coarsened, the sutural surfaces deepened and became more rugose, and the teeth became larger and thicker. In the post-cranial skeleton the most notably change is the shortned of the forearm. The new study shows that the number of growth changes generally decreases during adulthood. Additionally, changes to the pectoral girdle and pes are dominant early in ontogeny. Similarily, the transition from a long and low skull to a stout and deep skull occurred rapidly within a 2-year time span.