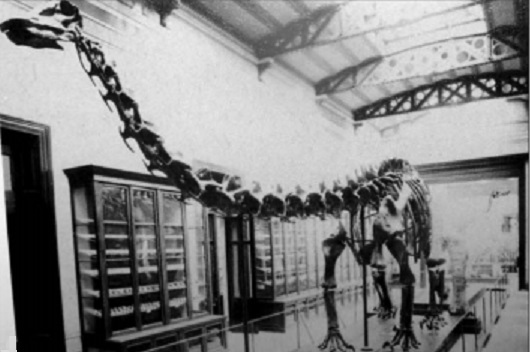 Diplodocus is one of the most popular dinosaurs of all time. The first remains of a Diplodocus were found by Benjamin Mudge and Samuel Wendell Williston, in the Upper Jurassic outcrops of Cañon City, Colorado, United States, in 1877. One year later, Othniel Charles Marsh named the species Diplodocus longus on the basis of remains of the hind limb and tail. The name Diplodocus means ‘double beam’ in reference to the particular two-pronged morphology of the posterior hemal arches. D. carnegii, was discovered in 1899 during an expedition carried out by the Carnegie Museum to the Upper Jurassic Morrison Formation of Wyoming. John Bell Hatcher dedicated the new species of to Andrew Carnegie.

A sketch from the of Diplodocus carnegii, which Carnegie had framed and mounted on a wall at his castle in Scotland.

William Jacob Holland, director of the Carnegie Museum, sent a sketch of the skeleton of Diplodocus to Andrew Carnegie. At the time, the steel tycoon was at his Castle, Skibo, in Sutherland County, Scotland. The King Edward VII of England, saw the sketch and asked Carnegie to give him a specimen for the British Museum of Natural History in London. Holland proposed to Carnegie to make a life-sized replica of D. carnegii to be given to the British Museum of Natural History. On May 12, 1905, the long skeleton was unveiled to a crowd of 300 people, and became an instant star. 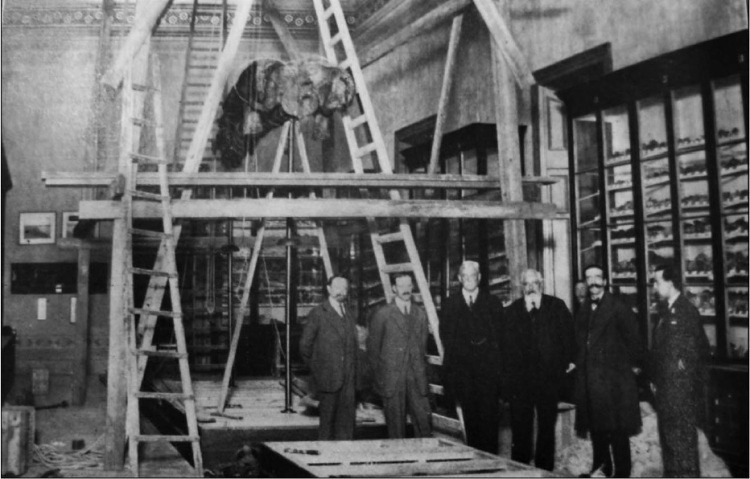 Mounting of the cast of Diplodocus carnegii at the Museo de La Plata, Argentina. Arthur Coggeshall and William Holland are second and third from left (Adapted from ‘Caras y Caretas’ magazine, 1912).

Nine replicas of D. carnegii were made and donated to kings and presidents of Europe and Latin America. On November of 1911, Argentinean president Dr. Roque Saenz Peña communicated to Andrew Carnegie his request to have a replica of D. carnegii. His request was accepted, and on July 1, 1912, 34 boxes containing the cast of the animal were sent to Argentina on the S.S. ‘Sallust’. William Holland and Mr. Arthur Coggeshall were in charge of mounting the replica. The site where the replica would be mounted in the Museo de La Plata, would be the Sala III, which was dedicated to invertebrates and plants. Holland insisted that the plans used for the mounting of D. carnegii at Vienna were followed in mounting the skeleton in La Plata. After the skeleton was mounted, the Director of the Museum, Dr. Samuel Lafone-Quevedo, gave a speech expressing his gratitude to Andrew Carnegie and his representatives, in which William Holland was designated an Honorary Member of La Plata University.

One thought on “The mounting of the cast of Diplodocus carnegii at the Museo de La Plata.”