In the last 540 million years, five mass extinction events shaped the history of the Earth. Those events were related to extreme climatic changes and were mainly caused by asteroid impacts, massive volcanic eruption, or the combination of both.  On a global scale the main forces behind climatic change are: solar forcing, atmospheric composition, plate tectonics, Earth’s biota, and of course, us. Human activity is a major driver of the dynamics of Earth system. From hunter-gatherer and agricultural communities to the highly technological societies of the 21st century, humans have driven the climate Earth system towards new, hotter climatic conditions. Until the Industrial Revolution, the average global CO2 levels fluctuated between about 170 ppm and 280 ppm. But with the beginning of the Industrial Era, that number risen above 300 ppm, currently averaging an increase of more than 2 ppm per year. The average monthly level of CO2 in the atmosphere in last April exceeded the 410 ppm for first time in history. Thus we could hit an average of 500 ppm within the next 45 years, a number that has been unprecedented for the past 50–100+ million years according to fossil plant-based CO2 estimates. This current human-driven change far exceed the rates of change driven by geophysical or biosphere forces that have altered the Earth System trajectory in the past, and it poses severe risks for health, economies and political stability. Learning from past climatic changes is critical to our future. 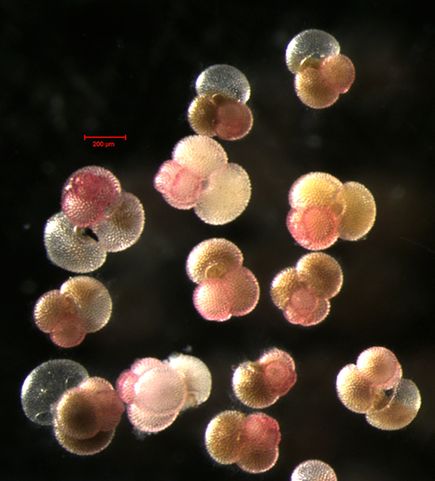 Microfossils from deep-sea are crucial elements for the understanding of our past and present oceans. Their skeletons take up chemical signals from the sea water, in particular isotopes of oxygen and carbon. Over millions of years, these skeletons accumulate in the deep ocean to become a major component of biogenic deep-sea sediments. The importance of microfossils as tool for paleoclimate reconstruction was recognized early in the history of oceanography. John Murray, naturalist of the CHALLENGER Expedition (1872-1876) found that differences in species composition of planktonic foraminifera from ocean sediments contain clues about the temperatures in which they lived. The ratio of heavy and light Oxygen in foraminifera shells can reveal how cold the ocean was and how much ice existed at the time the shell formed. Another tool to reconstruct paleotemperatures is the ratio of magnesium to calcium (Mg/Ca) in foraminiferal shells. Mg2+ incorporation into foraminiferal calcite  is influenced by the temperature of the surrounding seawater, and the Mg/Ca ratios increase with increasing temperature.

Diatoms and radiolarians are susceptible to different set of dissolution parameters than calcareous fossils, resulting in a different distribution pattern at the sea floor and have been used for temperature estimates in the Pacific and in the Antarctic Oceans, especially where calcareous fossils are less abundant. Diatom assemblages are also used in reconstructions of paleoproductivity. 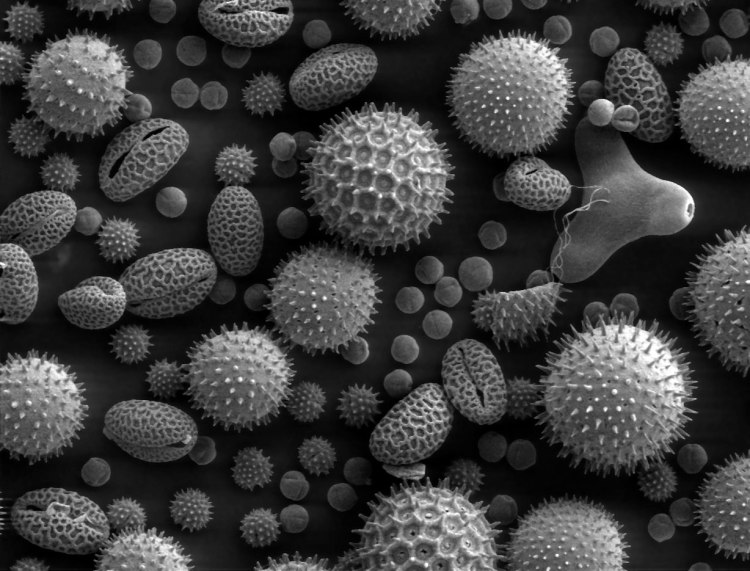 Pollen and other palynomorphs proved to be an extraordinary tool to paleoenvironmental reconstruction too. Pollen analysis involves the quantitative examination of spores and pollen at successive horizons through a core, specially in lake, marsh or delta sediments, especially in Quaternary sediments where the parent plants are well known. This provide information on regional changes in vegetation through time, and it’s also a valuable tool for archaeologists because it gives clues about man’s early environment and his effect upon it.

Stomatal frequency of land plants, which has been shown in some species to vary inversely with atmospheric pCO2, has been used to estimate paleo-pCO2 for multiple geological time periods. Stomata are the controlled pores through which plants exchange gases with their environments, and play a key role in regulating the balance between photosynthetic productivity and water loss through transpiration.

Temple I on The Great Plaza and North Acropolis seen from Temple II in Tikal, Guatemala. From Wikimedia Commons

Human activity has significantly altered the climate in less than a century. Since 1970 the global average temperature has been rising at a rate of 1.7°C per century, and the rise in global CO2 concentration since 2000 is 10 times faster than any sustained rise in CO2 during the past 800,000 years. Today the most politically unstable countries are also places where environmental degradation affected food production and water supply. Other human societies have succumbed to climate change – like the Akkadians – while others have survived by changing their behavior in response to environmental change. We have the opportunity to protect the future of our own society by learning from the mistakes of our ancestors.

3 thoughts on “Learning from Past Climate Changes”