A time-lapse animation showing severe cooling due to sulfate aerosols from the Chicxulub asteroid impact 66 million years ago (Credit: PKI)

Thirty years ago, the discovery of anomalously high abundance of iridium and other platinum group elements in the Cretaceous/Palaeogene (K-Pg) boundary led to the hypothesis that an asteroid collided with the Earth and caused one of the most devastating events in the history of life. The impact created the 180-kilometre wide Chicxulub crater causing widespread tsunamis along the coastal zones of the surrounding oceans and released an estimated energy equivalent of 100 teratons of TNT and produced high concentrations of dust, soot, and sulfate aerosols in the atmosphere. Three-quarters of the plant and animal species on Earth disappeared. Marine ecosystems lost about half of their species while freshwater environments shows low extinction rates, about 10% to 22% of genera.

Recent studies suggest that the amount of sunlight that reached Earth’s surface was reduced by approximately 20%. Photosynthesis stopped and the food chain collapsed. The decrease of sunlight caused a drastic short-term global reduction in temperature (15 °C on a global average, 11 °C over the ocean, and 28 °C over land). While the surface and lower atmosphere cooled, the tropopause became much warmer, eliminate the tropical cold trap and allow water vapor mixing ratios to increase to well over 1,000 ppmv in the stratosphere. Those events accelerated the destruction of the ozone layer. During this period, UV light was able to reach the surface at highly elevated and harmful levels. 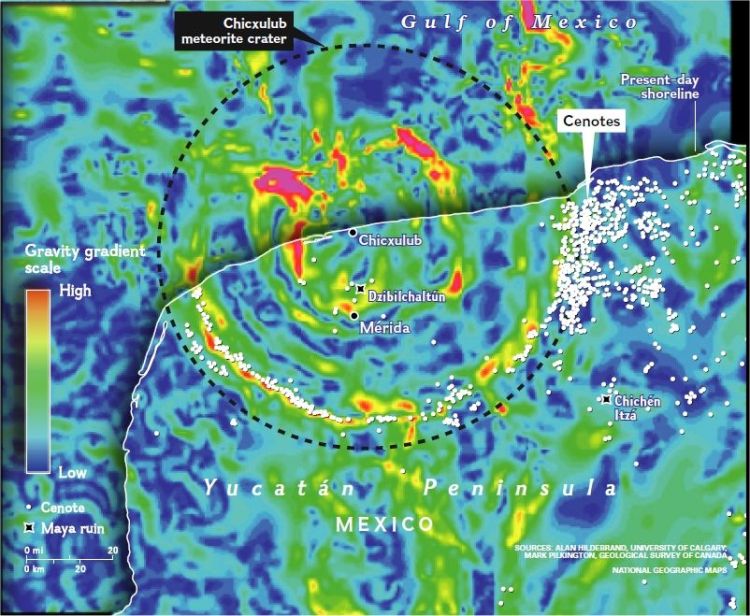 In 1980, Walter Alvarez and his father, Luis Alvarez ignited a huge controversy when they concluded that the anomalous iridium concentration at the K-Pg boundary is best interpreted as the result of an asteroid impact. They even calculated the size of the asteroid (about 7 km in diameter) and the crater that this body might have caused (about 100–200 km across). In 1981, Pemex (a Mexican oil company) identified Chicxulub as the site of a this massive asteroid impact. The crater is more than 180 km (110 miles) in diameter and 20 km (10 miles) in depth, making the feature one of the largest confirmed impact structures on Earth.

2 thoughts on “Dark skies at the end of the Cretaceous”