Pisanosaurus mertii was originally described by Argentinian paleontologist Rodolfo Casamiquela in 1967, based on a poorly preserved but articulated skeleton from the upper levels of the Ischigualasto Formation (Late Triassic). The holotype and only known specimen (PVL 2577) is a fragmentary skeleton including partial upper and lower jaws, seven articulated dorsal vertebrae, four fragmentary vertebrae of uncertain position in the column, the impression of the central portion of the pelvis and sacrum, an articulated partial hind limb including the right tibia, fibula, proximal tarsals and pedal digits III and IV, the distal ends of the right and left femora, a left scapular blade (currently lost), a probable metacarpal III, and the impressions of some metacarpals (currently lost). 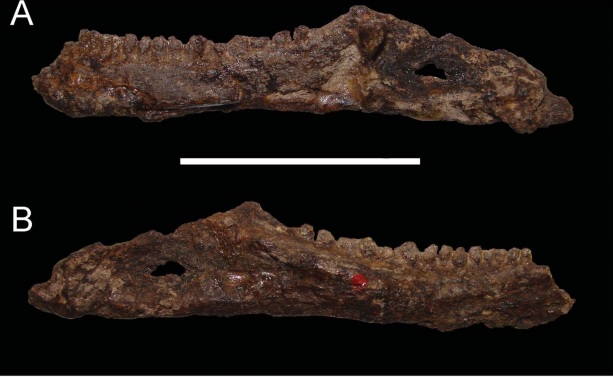 Pisanosaurus mertii holotype. Right lower mandible in medial (A) and lateral (B) views. Scale bar: 5 cm. From Agnolín and Rozadilla, 2017.

On the other hand, Pisanosaurus shows some derived traits that resulted as unambiguous synapomorphies of the Silesauridae clade, and include: reduced to absent denticles on maxillary and dentary teeth; sacral ribs shared between two sacral vertebrae; lateral side of proximal tibia with a fibular flange (present also in heterodontosaurids and several saurischians); dorsoventrally flattened ungual phalanges; and ankylothecodonty, teeth partially fused to maxilla and dentary bone. The first and last characters are lacking in ornithischians. Of course, the inclusion of Pisanosaurus within Silesauridae implies that this taxon does not constitute the oldest ornithischian. This also suggests a significant gap between Pisanosaurus and the oldest unambiguous records of ornithischians: Laquintasaura and Lesothosaurus, which may be dated as Hettangian in age. This is consistent with previous interpretations proposing that ornithischian radiation occurred after the Triassic–Jurassic boundary.

Padian K. The problem of dinosaur origins: integrating three approaches to the rise of Dinosauria. Earth and Environmental Science Transactions of the Royal Society of Edinburgh, Available on CJO 2013 doi:10.1017/S1755691013000431 (2013).