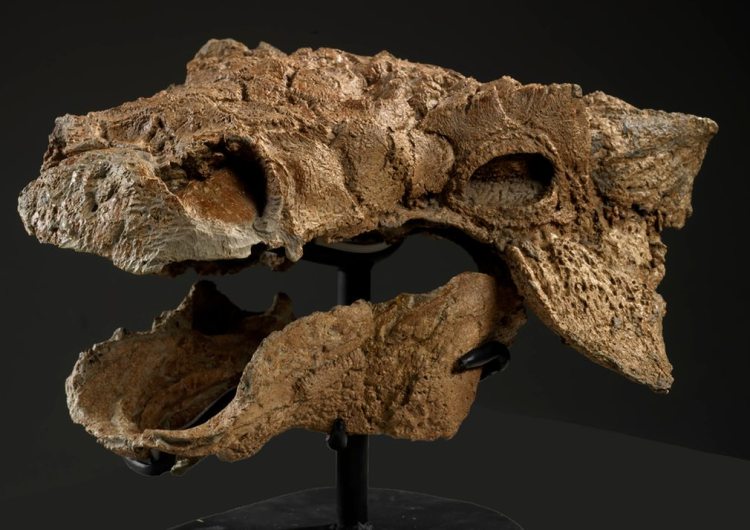 The Ankylosauria is a group of herbivorous, quadrupedal, armoured dinosaurs subdivided in two major clades, the Ankylosauridae and the Nodosauridae. Zuul crurivastator, from the Coal Ridge Member of the Judith River Formation of northern Montana, is the most complete ankylosaurid ever found in North America. The generic name refers to Zuul the Gatekeeper of Gozer (from the 1984 film Ghostbusters), and the species epithet combines crus (Latin) for shin or shank, and vastator (Latin) for destroyer, in reference to the sledgehammer-like tail club. The extraordinary preservation of abundant soft tissue in the skeleton, including in situ osteoderms and skin impressions make this specimen an important reference for understanding the evolution of dermal and epidermal structures in this clade. Until the discovery of Zuul, Laramidian ankylosaurin specimens were primarily assigned to three taxa: Euoplocephalus tutus and Ankylosaurus magniventris from northern Laramidia, and Nodocephalosaurus kirtlandensis from southern Laramidia.

The holotype (ROM 75860)  is a partial skeleton consisting of a nearly complete cranium, and a partially articulated postcranium. It is estimated to be over 6 metres long, and it would have weighed approximately 2500 kg. It has been dated to approximately 75 million years ago, and it was discovered accidentally on 16 May 2014 during overburden removal for a scattered tyrannosaurid skeleton, when a skid-steer loader encountered the tail club knob.

Overview of the tail of Zuul crurivastator in dorsal view, with insets of detailed anatomy (From Arbour and Evans, 2017)

The skull is almost complete, missing only the tip of the right quadratojugal horn and the ventral edge of the vomers, and is the largest ankylosaurine skull recovered from Laramidia. The skull is relatively flat dorsally, and had an elaborate ornamentation across the snout. The squamosal horns are robust and pyramid-shaped, and the quadratojugal horns had a sharp, posteriorly offset apex.

The tail club (including the 13 caudal vertebrae in the handle and the knob) is at least 210 cm long. Osteoderms are preserved not only in the anterior, flexible portion of the tail but also along the tail club handle. The first three pairs of caudal osteoderms are covered with a black film, that probably represent preserved keratin, and is similar to the texture observed at the base of bovid horn sheaths.

The discovery of Zuul fills a gap in the ankylosaurine record and further highlights that Laramidian ankylosaurines were undergoing rapid evolutionary rates and stratigraphic turnover as observed for Laramidian ceratopsids, hadrosaurids, pachycephalosaurids and tyrannosaurids.