In 1784, Cosimo Alessandro Collini, a former secretary of Voltaire and curator of the natural history cabinet of Karl Theodor, Elector of Palatinate and Bavaria, published the first scientific description of a pterosaur. The specimen came from one of the main sources of such fossils, the Late Jurassic lithographic limestones of northern Bavaria, and Collini, after much deliberation, interpreted it as the skeleton of an unknown marine creature. In 1801, on the basis of Collini’s description, George Cuvier identified the mysterious animal as a flying reptile. He later coined the name “Ptero-Dactyle”. This discovery marked the beginning of pterosaur research.

Pterosaurs are an extinct monophyletic clade of ornithodiran archosauromorph reptiles from the Late Triassic to Late Cretaceous. The group achieved high levels of morphologic and taxonomic diversity during the Mesozoic, with more than 150 species recognized so far. Pterosaurs have traditionally been divided into two major groups, “rhamphorhynchoids” and “pterodactyloids”. Rhamphorhynchoids are characterized by a long tail, and short neck and metacarpus. Pterodactyloids have a much larger body size range, an elongated neck and metacarpus, and a relatively short tail. Darwinopterus from the early Late Jurassic of China appear to be a transitionary stage that partially fills the morphological gap between rhamphorhynchoids and pterodactyloids. 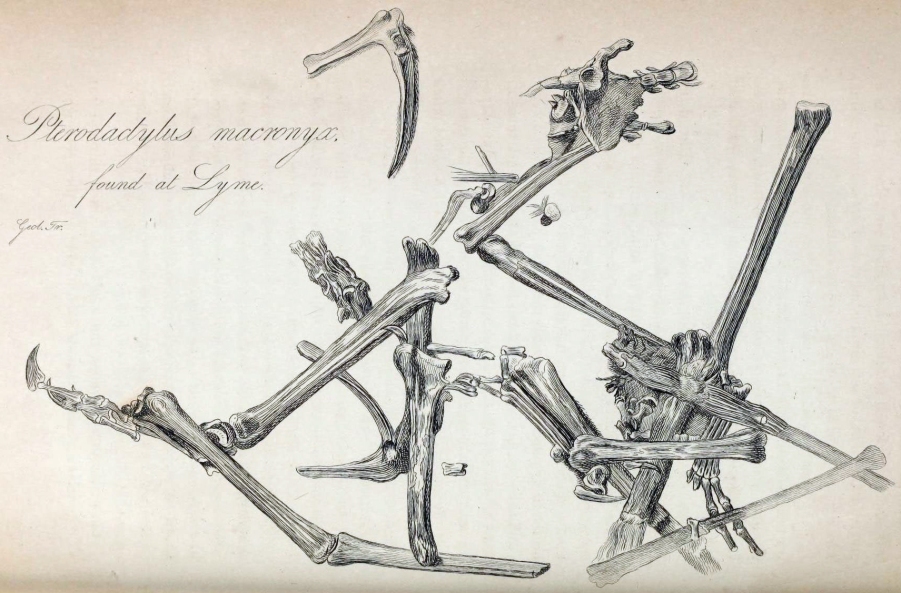 The second pterosaur to be discovered also came from the Solnhofen Limestone and was named Ornithocephalus brevirostris by Samuel Thomas von Sömmerring in 1817. The specimen was even smaller than Pterodactylus antiquus, with a wingspan of only 25 cm. On December of 1828, Mary Anning found the first pterosaur skeleton outside Germany. William Buckland made the announcement of Mary’s discovery in the Geological Society of London and named Pterodactylus macronyx in allusion to its large claws. The animal had a wingspan of around 1.4 m with an elongate tail. The specimen was twice the size of Pterodactylus antiquus. The skull of Anning’s specimen had not been discovered, but Buckland thought that the fragment of jaw in the collection of the Philpot sisters of Lyme belonged to a pterosaur. In the 1850s, another specimen was found, this time with a skull at Lyme and another skull was found later. The skulls of the Lyme Regis pterosaurs bore no resemblance to those of the Solnhofen Limestone in Germany, so Richard Owen erected the new generic name Dimorphodon (Martill, 2013). 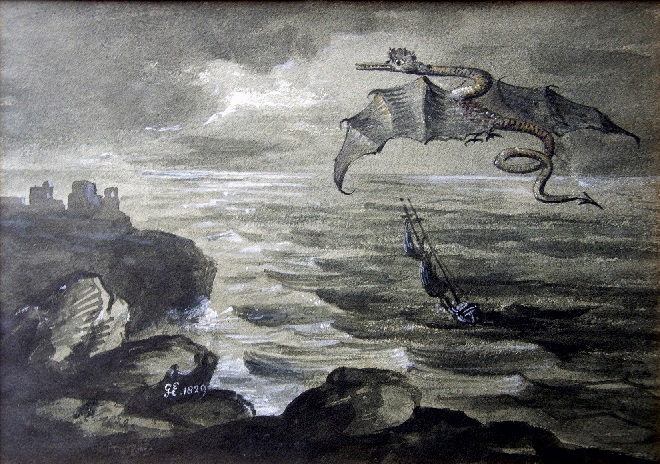 Water colour by the Reverend G. E. Howman (From Martill 2015)

In 1829 the Reverend George Howman painted the earliest restoration of a pterosaur. The watercolour also incorporates a ruined castle and a ship, but amazingly predicts aspects of the anatomy of pterosaurs not brought to light by fossils discovered until a few decades later. There’s little doubt that the watercolour by Howman was intended to represent the Pterodactylus discovered by Mary Anning. A label on the back of the work reads: ‘By the Revd G. Howman from Dr [Burckhardt’s] account of a flying dragon found at Lyme Regis supposed to be noctivagous’ . The watercolour Duria Antiqior by Henry de la Beche, also represents several pterosaurs flitting over a scene of ichthyosaur and plesiosaur, representing the Liassic Sea based on fossils found by Mary Anning.

Skull of Pteranodon sp. in the American Museum of Natural History (From Wikipedia Commons)

In 1845, James Scott Bowerbank exhibited a portion of the snout of ‘a new and gigantic species of Pterodactyl’ at a meeting of the Geological Society of London. The specimen was named Pterodactylus giganteus. He also considered that many of the bones described as avian by Richard Owen, were most likely to be from ‘pterodactyls’.

The discovery of Pteranodon by O.C. Marsh in 1870, eclipsed previous pterosaur discoveries. Pteranodon was the first pterosaur found outside of Europe. Marsh’s discoveries were made in the Late Cretaceous Smoky Hill Chalk deposits of western Kansas. Prior to this discovery, the largest pterosaur fossils known were fragmentary remains from the Cretaceous Chalk of southern England. Edward Drinker Cope, Marsh’s rival, also unearthed several specimens of large North American pterosaur. 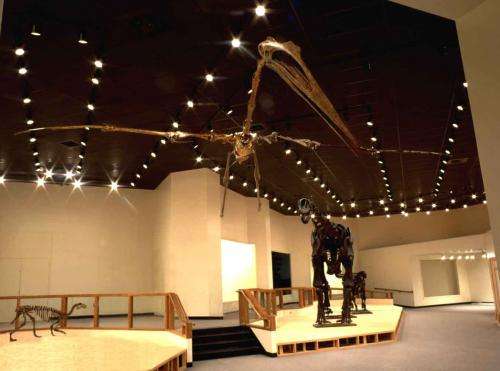 The first evidence of non-American pterosaurs that rivalled Pteranodon in size was made by C. A. Arambourg around 1940. The specimen was named Titanopteryx philidelphiae. But it was not until the 1970s, that relatively frequent discoveries of giant pterosaurs began again. In 1971,  Douglas A. Lawson, a geology graduate student from the University of Texas, found a 544-mm long humerus and other elements of a huge wing in the Maastrichtian Javelina Formation of Texas. The specimen was named Quetzalcoatlus after the Mexican deity Quetzalcoatl, who was worshipped by the Aztecs in the form of a feathered snake. In 1975, Lawson reidentified Arambourg’s pterosaur metacarpal as a cervical vertebra from a Quetzalcoatlus-like animal, and one with similar proportions to Quetzalcoatlus northropi.

Illustration from the original serialization of The Lost World.

Jules Verne was the first to introduce Pterosaurs into popular fiction in his novel ”Journey to the Centre of the Earth”, published in France in 1874. In “The Lost World” written by Sir Arthur Conan Doyle, which appeared in The Strand Magazine from April through November of 1912, pterosaurs are central figures. At the beginning of the novel, Professor George Edward Challenger claims to have captured and subsequently lost, a living specimen in South America. After being ridiculed for years, he invites E. Malone, a reporter for the Daily Gazette, Professor Summerlee and Lord John Roxton, an adventurer who knows the Amazon to join him to a trip to South America and prove his story. Later, the crew were attacked by pterodactyls in a swamp. Doyle compares the place with one of the Seven Circles of Dante and described as followed: “The place was a rookery of pterodactyls. There were hundreds of them congregated within view. All the bottom area round the water-edge was alive with their young ones, and with hideous mothers brooding upon their leathery, yellowish eggs”. Doyle completes the scenes by describing the males: “Their huge, membranous wings were closed by folding their fore-arms, so that they sat like gigantic old women, wrapped in hideous web-coloured shawls, and with their ferocious heads protruding above them. Large and small, not less than a thousand of these filthy creatures lay in the hollow before us”.

The Lost World novel has been so immensely popular that it has had a lasting effect, and has contributed significantly to the fascination with dinosaurs and pterodactyls. In 1994, Arthurdactylus a genus of pterodactyloid pterosaur from the Lower Cretaceous  of Brazil was named in honor of Arthur Conan Doyle.

2 thoughts on “A brief history of Pterosaurs.”