Annie Montague Alexander was born on December 29, 1867, in Honolulu, Hawaii. She was the oldest daughter of Samuel Thomas Alexander and Martha Cooke. Both of her parents were the children of missionaries from New England who had come to the Hawaiian Archipelago in 1832. Her father pioneered in the raising of sugar cane on Maui, and founder of Alexander & Baldwin, Inc., one of the biggest companies in Hawaii.

Annie was educated at home by a governess until age fourteen, when she attended Punahou School in Honolulu for one year. In 1882, she moved with her family to Oakland, California. In the fall of 1887, she attended the Lasell Seminary for Young Women, a junior college in Auburndale, Massachusetts. At Lasell, she would join a close childhood friend from Maui, Mary Beckwith. During the two years she spent there she not enrolled in any science classes but studied nineteenth-century history, political economy, civil government, German, French, logic, dress cutting, and photography. Shortly after, she started to study painting in Paris. Unfortunately she began to suffer severe headaches after long hours at the easel and was warned of the possibility of blindness. Later, she enrolled in a training program for prospective nurses at a local hospital, but dropped after a short time and travelled to Europe with her family. In 1899 she met Martha Beckwith, the younger sister of her childhood friend,Mary Beckwith. They became great friends and both went on a trip to explore Oregon and California. Martha, a graduate of Mount Holyoke College, encouraged Annie to broaden her knowledge of the natural world. A year later, she started attending lectures at the University of California, becoming particularly interested in lectures on paleontology given by Dr. John C. Merriam. That was the beginning of the long relationship between Annie Montague Alexander and the University of California at Berkeley, a relationship that would prove exceptionally advantageous to both of them. 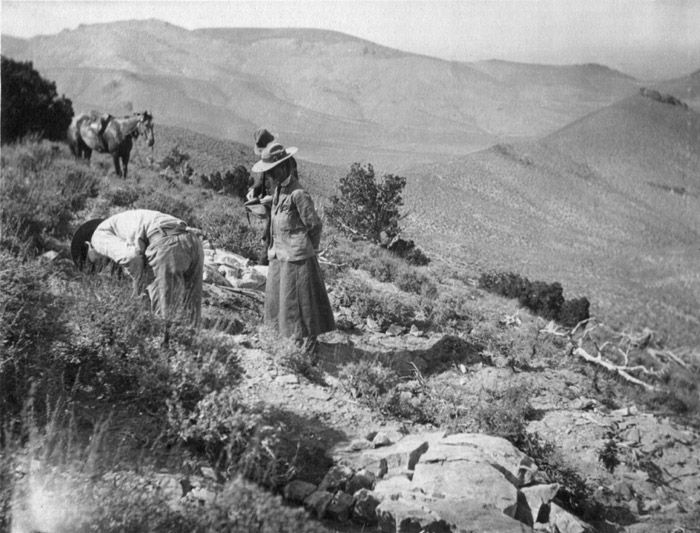 At first, Annie limited her involvement to funding several of Merriam’s fossil hunting expeditions, but by the summer of 1901, Annie joined her instructor Dr. Merriam and Vance C. Osmont, an assistant professor of mineralogy at the University of California in a field trip to Shasta County, California. Then she financed and led her own expedition to the Fossil Lake region of southern Oregon. She and her group recovered over 100 fossils from a variety of extinct mammals, including miniature horses and camels. In a letter to Martha she wrote: “The fever for amassing these strange treasures might make of me a collector of the most greedy type, unmoved by ‘threats of Hell or hopes of Paradise.’”

The following summer, Annie financed and organized a new fossil collecting expedition to Shasta County in northern California.  She uncover three important ichthyosaur skeletons, including one nearly complete and exceptionally well-preserved specimen. After examining the skeleton, Merriam concluded that it was a new species of ichthyosaur, which he named Shastasaurus alexandrae in Annie’s honor. She organized a second field trip to Shasta County. Once again, she made an extraordinary discovery: a new genus of ichthyosaur. The fossil was named Thalattosaurus alexandrae as a tribute to Annie.

In 1904, she embarked with her father to a long safari to Africa. Her beloved father died during trip. To recover from her loss, Annie turned to the paleontological fieldwork. She later declared: “It is strange how absorbing this work is. We forget the outside world”. 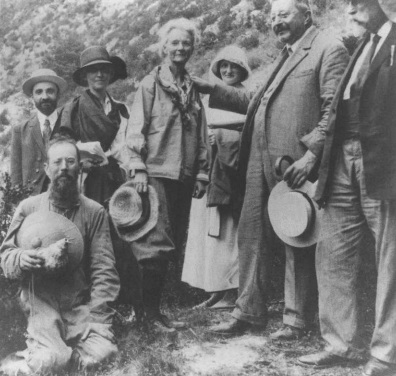 In the fall of 1905, Annie met C. Hart Merriam chief of the United States Biological Survey. Then she financed a paleontological expedition to the West Humboldt Range in Nevada, to explore the Triassic limestones of the region. This trip, know as the  “Saurian Expedition,” was a great success. Under the leadership of Professor John C. Merriam, the group discovered twenty-five specimens of ichthyosaurs, including some of the largest in the world and the most complete ever found in North America. Annie, later wrote an account of the expedition, illustrated with her own photographs. During that time she met Joseph Grinnell, a young naturalist from Pasadena, California. Grinnell told her of the need for a natural history museum on the west coast. She became enthusiastic with the project and she insisted that the museum should be housed at the University of California. She and Joseph Grinnell would have complete control of the museum and its employees. The cost of the Museum of Vertebrate Zoology was covered almost entirely by Annie. A year later she helped to funding the Department of Paleontology and in 1921 she established the university’s Museum of Paleontology.

Annie’s last extended trip was in the winter of 1947—48 to Baja California, when she and her longtime companion Louise Kellogg  spent three months collecting more than forty-six hundred botanical specimens.

Annie Alexander died, on September 10, 1950, at the age of eighty-two. Her ashes were buried in Makawao Cemetery, Maui. Her contributions were recognized by zoologists and botanists, who named two mammals, two birds, six fossils, and two plants after her.