Ancient manuscripts, paintings and plays  provide valuable information to help modern scientists to reconstruct the climate of the past. The information recovered from these ancient sources are mainly focused on extreme events with a great impact in society like droughts or floods, and other less dramatic conditions. For instance, the analysis of the writings of scholars and historians in Iraq during the Islamic Golden Age between 816 and 1009 AD revealed an increase of cold events in the first half of the 10th century  immediately before the Medieval Warm Period. It’s also possible analyze  volcanic eruptions in the past by studying the colouration of the atmosphere in paintings that portrayed sunsets in the period 1500–1900 AD.

The analysis of the writings of Aeschylus, Sophocles, Euripides and Aristophanes during the Golden Age (5th and 4th centuries B.C) provides a valuable insight into the Mediterranean climate of the time. 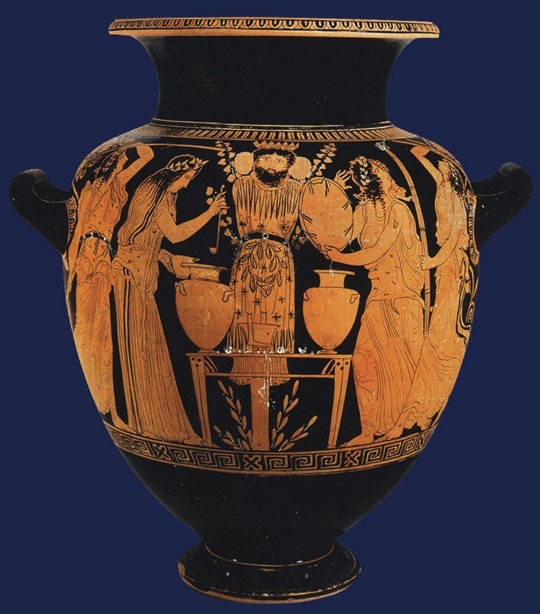 Halcyon days occur in Greece, especially in Attica, and in southeastern Europe in the middle of winter between 15 January and 15 February, during which the halcyon birds were supposed to lay their eggs . The Halcyon days has its origins in an ancient myth. Halcyon was the daughter of Aeolus, the God of the Winds. She was married to Ceyx the King of Thessaly. After his brother died, Ceyx embarked on a voyage across the sea to consult the oracle of Apollo. He died in a storm and Halcyon threw herself into the waters to reunite with him. The gods amazed by her love and devotion, transformed Ceyx and Halcyon into kingfishers. Then, Zeus decreed that the winter sea stay calm for a period of 14 days so that the birds could keep their eggs safe in the winter.

Euripides in Medea wrote about the pleasant and harmonious climate: “Men celebrate in song how Aphrodite, filling her pail at the streams of the fair flowing Cephisus, blew down upon the land temperate and sweet breezes“.

The comedies of Aristophanes, often invoke the presence of the halcyon days. In Birds he mentioned the ‘skiadeion’, a kind of umbrella used solely to protect people from the sunlight rather than rain. Also, the drawn from the paintings on vessels showing that the clothes worn in Lenaia (an annual Athenian festival with a dramatic competition) were not designed for rainy weather.

Christina Chronopoulou, A. Mavrakis, ‘Ancient Greek drama as an eyewitness of a specific meteorological phenomenon: indication of stability of the Halcyon days.’ Weather, DOI: 10.1002/wea.2145

One thought on “Ancient Greek theater and the past Mediterranean climate.”