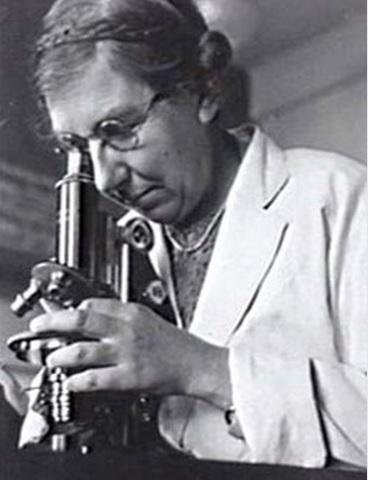 Isabel Clifton Cookson was one of Australia’s first professional women scientists, but unlike Adele V. Vicent, who studied  the importance Silurian-Devonian floras in Victoria,  her scientific work is well recognized.  She was one of the most prominent palynologist of the twenty century. She described a total of 110 genera, 557 species and 32 sub especific taxa of palynomorphs and plants, and published 93 scientific papers (some of them in collaboration with other prominent scientists).

She was born on December 25, 1893 in Melbourne, Australia. After graduating in Zoology and Botany at the University of Melbourne in 1916, she worked for a brief time at the National Museum of Victoria and became interested in fossil plants.

Between 1916 and 1917 she received the Government Research Scholarship, for work on the flora of the Northern Territory of Australia and was awarded with the McBain Research Scholarship in biology. She also collaborated with some illustrations to the  book The Flora of the Northern Territory by Alfred J. Ewart and O. B. Davies.

Cooksonia pertoni, one of the earliest land plants (Credit: Hans Steur, The Netherlands.)

In 1925, she went to England  to study with Professor Le Rayner  and with Professor Sir A. C. Seward, an authority on  fossil plants. She returned a year later as a mycologist in cotton research in the University of Manchester, where she met Professor W. H. Lang.  She started an important and  productive academic relationship with Lang, who named the genus Cooksonia in her honour.

In 1932, she returned to Melbourne and became mentor of many female researchers like Lorna Medwell and Mary E. Dettmann.

During the 1940s , she began to conduct detailed palaeobotanical studies, with emphasis on pollen analysis and demonstrated the importance of plant microfossils  in biostratigraphy  and in oil exploration.

In the early 1950s, she was a pioneer in the study of marine palynomorphs: dinoflagellate cysts, acritarchs and chitinozoans from Australian Tertiary and Mesozoic sediments. She also worked with George Deflandre and Alfred Eisenack.

Although her important work, she only reached the senior lecturer status in the department of botany and officially retired in 1959.

After her retirement, she  continued doing active research work  mainly by self-funding thanks to her skills as an investor on the stock exchange.

Isabel Clifton Cookson died on 1 July 1973 at her Hawthorn home. In her honor,  the Botanical Society of America gives the Isabel Cookson Award since 1976,  to the best paper on palaeobotany presented at their annual meeting.