At the beginning of the sixteenth century and throughout the seventeenth century a great debate about the true nature of and the origin of fossils started in Italy, the cradle of Leonardo and Aldrovandi. There was two hypothesis in dispute: the first one postulated an inorganic origin for the fossils (directly formed within rocks) and the second, which contemplated an organic origin.

The most strong supporter for the organic origin of fossils was the italian painter Agostino Scilla. He was born in Messina on August 10, 1629. He was  a disciple of Antonio Barbalunga in Messina and Andrea Sacchi in Rome, and later became a member of the Academy of Messina ‘della Fucina. 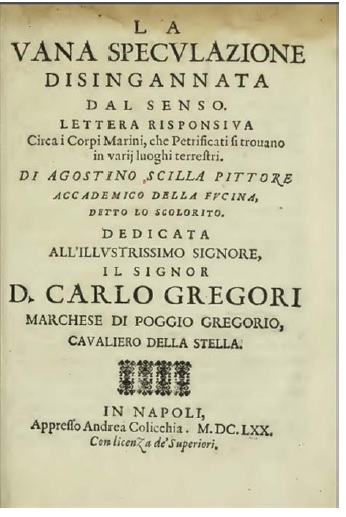 He published only one scientific treatise: La vana speculazione disingannata dal senso, lettera risponsiva Circa i Corpi Marini, che Petrificati si trouano in vari luoghi terrestri (The vain speculation disillusioned by the sense, response letter concerning the marine remains, which are found petrified in various terrestrial places). The aim of the work was the demonstration that fossils, which are found embedded in sediments on mountains and hills, represent the remains of lithified organisms, which at one time lived in the marine environment. The text was later translated to Latin and it was written as a response to a letter sent to him by Giovanni Francesco Buonamico, a doctor from Malta.

Scilla  applied a method of analysis that we today define, in all respects, empirical and scientific and his observations constitute the seeds for the emergence of taphonomy and paleontology in general. The central theme of Scilla’s work was the demonstration that the ‘Glossopetrae’ (shark teeth) and other petrified objects resembling living animals actually represent the remains of organisms that once lived in the sea. He thought that the correspondence of so many parts, well structured and coincident in the fossil, cannot be due to a coincidence or  a freak of nature.

Like Aldrovandi, he thought that the natural world must first be analysed in the field by direct observation. He went to fossiliferous sites himself, especially a locality name Musorrima, near the city of Reggio Calabria.

He was also a pioneer in the field of taphonomy. For example, starting from the original shape that characterises echinoids in life, Scilla  infers that many shells had been compressed and crushed by the weight of the sediment after burial, and he pointed out that individual shells were deformed in different ways, in relation to how they were oriented in the sediment and thus in relation to the direction of the compressive force.

Scilla’s writing includes some fundamental concepts for paleontology and the geological sciences like: actualism, taphonomy, preservation through the process of internal/external moulding and basic sedimentology.

Romano, Marco, Historical Biology (2013): ‘The vain speculation disillusioned by the sense’: the Italian painter Agostino Scilla (1629–1700) called ‘The Discoloured’, and the correct interpretation of fossils as ‘lithified organisms’ that once lived in the sea, Historical Biology: An International Journal of Paleobiology, DOI: 10.1080/08912963.2013.825257

4 thoughts on “Agostino Scilla and the true nature and origin of fossils.”