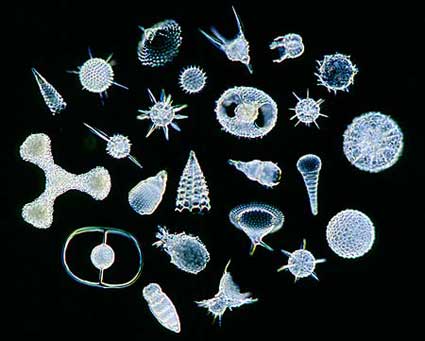 Radiolarians are single-celled protist marine organisms that generate unique and intricately detailed glass-like exoskeletons. The size range varies between 20 and 300 microns, in the case of solitary forms and up to 3 m, in the colonial forms.

They belong to the Phyllum Protista, Subphylum Sarcodina, Class Actinopoda, Subclass Radiolaria and include two Superorders: The Phaedaria and The Polycystina. The Phaedaria have skeletons composed of hollow silica bars joined by organic material and are not commonly preserved in the fossil record, meanwhile the Polycystina have skeletons of pure silica and are more commonly preserved in the fossil record. Also, the Polycystina are divided into two suborders: the Spumellaria and the Nassellaria.

Diagrammatic cross-section of a radiolarian. Image from UCL.

At the cellular level there’s an inner capsule that divides the cytoplasm in two different units: the endoplasm -which is contained by the capsule-, and the surrounding ectoplasm that often contains symbiotic algae and on the surface of the ectoplasm there’s a layer of ray-like axopodia and rhizopodia.

The skeleton is formed by bars (elongated elements and connected at both ends), spines (elongated elements, attached at only one end) or perforated plates. The structure of the skeleton wall could be spongy, lattice or perforated. Symmetry is the element that allows characterization of the skeleton. This may be spherical (or a derivative form) or axial. The skeletons with spherically symmetry may include intra and extracapsular concentric spheres,  with internal spiral structure, biconvex discs, or triradiate plates. In case of  skeletons with axial symmetry, they have one or more segments arranged along an axis. The Spumellaria shows a spheric symmetry and the Nassellaria have axial symmetry. 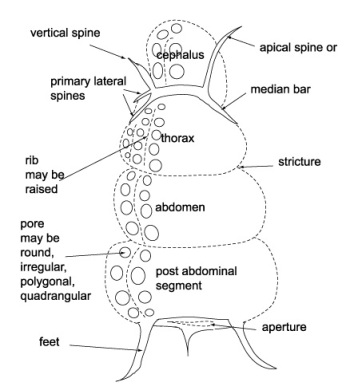 Basic morphological features of a nassellarian radiolarian. From UCL.

Radiolaria were among the earliest eukaryotes. The first recorded occurrences are from the end of the Precambrian and the geological record is extended to Recent.  Early radiolarians belong to the Orden Spumellaria and the first members of the Orden Nassellaria appeared  at the end of Carboniferous.

Because the variation of skeletons through time, radiolarians are very useful as biostratigraphic tools. They have also been used as paleoclimatic indicators of paleotemperatures, paleogeography and tectonic changes.

Ehrenberg made a series of special monographs from 1838 to 1875 and named the group Polycystina. In 1855, Johann Muller suggested the name Radiolaria. But was Ernst Haeckel who made the first complete  classificatory system for the Radiolaria and produced finely detailed drawings of them in his book: “Die Radiolarien” in 1862.

Radiolaria illustration from the Challenger Expedition 1873–76. From Wikimedia Commons.

Haeckel was a man of science and an aesthete. He published his master work “Kunstformen der Natur” (Art Forms of Nature)  in 1904 and helped to popularize radiolarians among the microscopists of the Victorian Era. 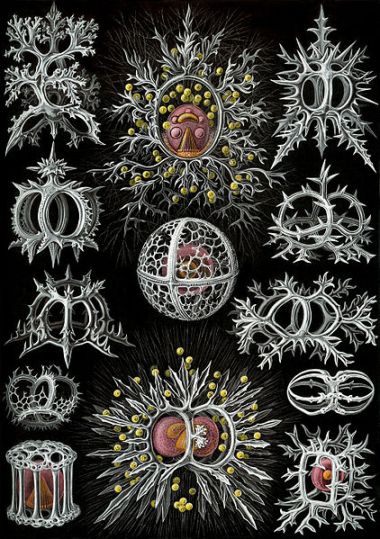 In 2004, David Lebrun wrote and directed a documentary about the understanding of marine creatures in 19th century with special emphasis on Ernst Haeckel and his fascination with radiolarians.

8 thoughts on “The beauty of radiolarians.”