In 1838, Christian Gottfried Ehrenberg, the famous  German naturalist and microscopist, described for first time fossil dinoflagellates from thin sections of Cretaceous flint (1). He observed tabulate dinoflagellates and some spinose bodies that he interpreted  as desmids placing them within the genus Xanthidium. Now we know  that ”xanthidia” are in fact dinoflagellate cysts.

Dinocyst drawn by Ehrenberg. From the Wikimedia Commons.

It was Evitt in 1961 the first to recognized that many of these tiny spinose specimens exhibited structures that appeared to link them to cysts produced by dinoflagellate algae during a non-motile stage in their life cycle. He was able to recognize patterns common to living dinoflagellates as well as features that are unique to the fossil forms (2).

Dinoflagellates are unicellular protists that possess a nucleus lacking of histones, known as dinocarion, and at least one life-cycle stage involving cells with two characteristic flagella.

Features of a thecate dinoflagellate. Redrawn from Fensome et al. 1996. Image from UCL.

Their populations are distributed based on the temperature, oxygenation, salinity and depth, therefore the dinoflagellate cysts are a tool to paleoenvironmental reconstruction  as they are sensitive indicators of such parameters.

Like many other protist, Dinoflagellates have a layer of vesicles near the margin of the cell. These vesicles contain cellulosic plates arranged in a certain pattern, which provides the primary basis for determining evolutionary relationships within the group (2). In 1907, Kofoid created a standardised decription of the tabulation pattern in dinoflagellates that is still use today and this tabulation pattern is the key to recognize dinocysts in the fossil record.

A phylogenetic analysis gives them a Precambrian origin, but despite that some resembles acritarcs the most accurate fossils belong to the Late Triassic.

The Mesozoic radiation of the dinoflagellates is paralleled with the increase of sea level and the expansion of flooded continental shelf area (3). During the Jurassic they became more abundant and very fast-evolving, making them ideal subjects for palynostratigraphy. 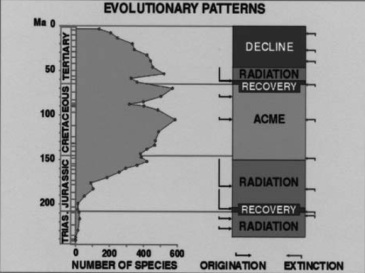 The diversity of dinoflagellates declined during the mid Cretaceous, but dinoflagellate-based palynostratigraphy remains important.

From the Maastrichtian to the late Palaeocene, dinoflagellates diversity declines again followed by another increase until the early Eocene.